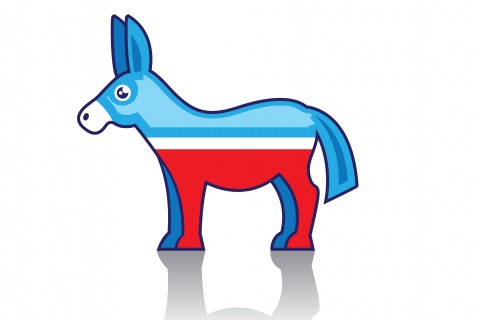 In the latest poll, 51 percent of Sanders’ supporters say that they expect Clinton will ultimately prevail in November. Seventy-seven percent of them say they would vote for Clinton in a general election match-up against Donald Trump, though nearly half – 45 percent – would do so reluctantly, and 15 percent would not vote for her.

“Hillary Clinton’s biggest challenge won’t be persuading Sanders supporters to support her in the general election, but to motivate them to turn out for her,” said Dan Schnur, director of USC’s Jesse M. Unruh Institute of Politics. “She doesn’t have to get them to fall in love with her, but to make them fear the prospect of a Trump candidacy enough to vote.”

Clinton has an advantage among Latino voters in California, with 52 percent of Democratic Latino voters saying they would vote for her, compared with 37 percent for Sanders. However, Sanders maintains a strong following of young voters, with 71 percent of those ages 18-29 stating their support for him in the primary.

While Clinton holds the lead among registered Democrats with 49 percent of their support, Sanders draws much of his support – 44 percent – from voters with no party preference. Clinton also garnered support from 71 percent of those looking for a candidate with the “right experience” to be president, while Sanders won the support of 66 percent of Democratic voters who prefer a candidate “not beholden to special interests.”

The latest USC Dornsife/LA Times Poll, the largest statewide survey of registered voters, was conducted March 16-23, and includes a significant oversample of Latino voters as well as one of the most robust cellphone samples in the state. The full sample of 1,500 voters has a margin of error of +/- 2.8 percentage points. Additional poll results and methodology are available online.

About the USC Dornsife College of Letters, Arts and Sciences/Los Angeles Times Poll: The USC Dornsife/LA Times Poll is a series of statewide public opinion polls in California, designed to survey voter attitudes on a wide range of political, policy, social and cultural issues.

Conducted at regular intervals throughout the year, the poll is the largest statewide poll of registered voters and has been widely cited, helping to inform the public and to encourage discourse on key political and policy issues.

About USC Dornsife College of Letters, Arts and Sciences: USC Dornsife is the heart of the university. The largest, oldest and most diverse of USC’s 19 schools, USC Dornsife is composed of more than 30 academic departments and dozens of research centers and institutes. USC Dornsife is home to approximately 10,000 undergraduate and graduate students and more than 750 faculty members with expertise across the humanities, social sciences and sciences.

About the Los Angeles Times: The Times is the largest metropolitan daily newspaper in the country, with a daily readership of 2 million and 3 million on Sunday, and a combined print and interactive local weekly audience of 4.5 million. The fast-growing latimes.com draws over 10 million unique visitors monthly.

“There may be a ceiling on his support,” poll director Dan Schnur says of the front-runner.