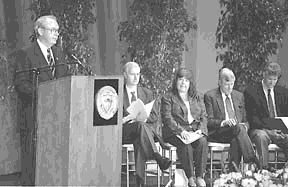 Above, Steven B. Sample officiates at a memorial tribute to Internet pioneer Jonathan B. Postel at Bovard Auditorium on Thursday, Nov. 5. With him, from the left, are Ira Magaziner, senior adviser for policy development to President Clinton; Joyce K. Reynolds, senior network services specialist at the School of Engineering’s Information Sciences Institute (ISI); Herbert Schorr, executive director of ISI; and Joseph A. Bannister, acting director of the Computer Network Division at ISI. Magaziner read a letter from President Bill Clinton: “With vision, intelligence, and a rigorous insistence on simplicity and elegance of design, he helped to establish and manage the Internet’s address system and for three decades set policies and standards that shaped the Internet’s growth and development,” wrote the president. “Because of his efforts, people across America and around the world have virtually unlimited access to a universe of knowledge.”

At the close of the ceremony, brother Thomas Postel led the luminaries as they launched paper airplanes into the audience. The airplanes were made from actual pages of the Request For Comments documents about Internet protocols that Postel had edited since the Internet began. Postel was director of ISI’s Computer Networks Division and directed the Internet Assigned Numbers Authority, which manages the global network’s address system. He died Friday, Oct. 16, of complications from heart surgery.