USC scientist Meghan Miller is among an international team of researchers who used computer modeling to reveal, for the first time, how giant swirls form during the collision of tectonic plates, with subduction zones stuttering and recovering after continental fragments slam into them.

The team’s 3-D models suggested a likely answer to a question that has long plagued geologists: Why do long, curving mountain chains form where two tectonic plates collide, pushing one down into the mantle?

Based on the models, the researchers found that parts of the slab that are being subducted sweep around behind the collision, pushing continental material into the mountain belt.

“The new model explains why we see curved mountains near colliding plates, where material that has been scraped off of one plate and accreted on another is dragged into a curved path on the continent,” Miller said.

Miller, an assistant professor of Earth sciences at the USC Dornsife College of Letters, Arts and Sciences, collaborated with lead author Louis Moresi from Monash University and his colleagues Peter Betts (also from Monash) and R.A. Cayley from the Geological Survey of Victoria in Australia. Their research was published online by Nature on March 23. 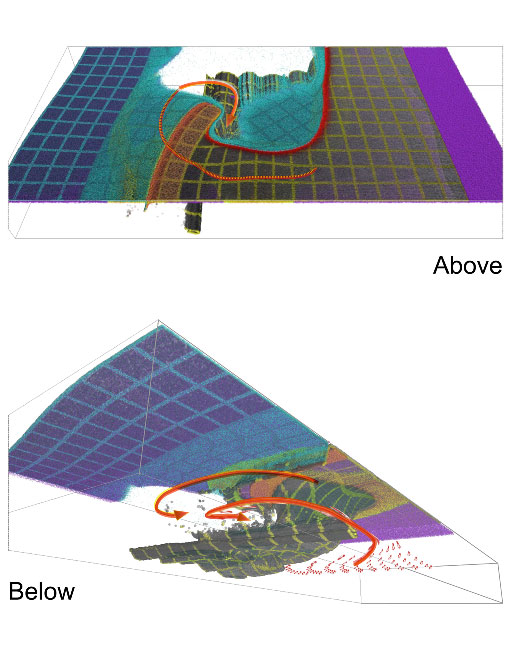 The research specifically looked at the ancient geologic record of Eastern Australia, but it is also applicable to the Pacific Northwest of the United States, the Mediterranean and southeast Asia.

Coastal mountain ranges from Northern California up to Alaska were formed by the scraping off of fragment of the ancient Farallon plate as it subducted beneath the North American continent. The geology of the Western Cordillera  — wide mountain belts that extend along all of North America — fits the predictions of the computer model.

“The amazing thing about this research is that we can now interpret arcuate-shaped geological structures on the continents in a whole new way,” Miller said. “We no longer need to envision complex motions and geometries to explain the origins of ancient or modern curved mountain belts.”

The results from the research will help geologists interpret the formation of ancient mountain belts and may prove most useful as a template to interpret regions where preservation of evidence for past collisions is incomplete — a common, and often frustrating, challenge for geologists working in fragmented ancient terrains.

“Fresh” rock exposed by uplift also emits carbon through a chemical weathering process, according to researchers.