“Until I read Solomon’s memoir, I didn’t know what being a writer was all about,” Ridley said in his acceptance speech. “The way that Solomon wrote, the clarity with which he wrote, and more importantly, the strength of his character, what he went through without bitterness, without hate —that really taught me something.” 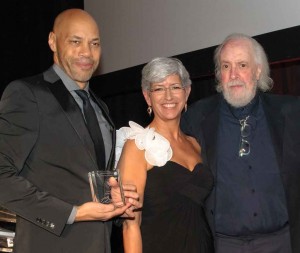 The film’s Scripter win adds to the growing number of awards for the Fox Searchlight production, including best motion picture in the drama category at the Golden Globes. The film is nominated for nine Academy Awards, including best picture and best adapted screenplay.

The Scripter, established by the Friends of the USC Libraries in 1988, honors the screenwriter of the year’s most accomplished cinematic adaptation, as well as the author of the written work upon which the screenplay is based. It is the only award of its kind that recognizes authors of the original work alongside the adapting screenwriters.

Ridley based his adaptation on Northup’s memoir, a bestseller when published in 1853 by Derby & Miller. In the 20th century, the work lapsed into obscurity until Louisiana State University Press issued an annotated version in 1968, following work by two Louisiana researchers to verify the story’s details.

“A library does more than collect ambitious life stories, more than make certain the great literary, philosophical and scientific thinkers live on to inspire endless generations of discoverers,” Quinlan said. “An excellent library also creates experiences for students that inspire them to seek meaning in their studies, their careers and their lives.”

Co-chaired by Golden Globe-winning and Oscar-nominated screenwriter Naomi Foner and USC screenwriting Professor and Vice President of the Writers Guild of America, West, Rodman, the Scripter selection committee chose 12 Years A Slave from a field of 86 eligible films.

The USC Libraries also honored Robert Towne with the Literary Achievement Award for his contributions to the art of adaptation throughout his career. His daughter, Chiara Towne, presented the honor.

“The truth is, there are no shortcuts to great screenplays about the past,” she said. “But growing up, the thing I noticed that set my father’s writing apart was the extraordinary, unending amount of research that goes into his films.”

Towne, a native of Southern California, has set much of his work there, including his scripts for Ask the Dust, which Towne adapted from the 1939 novel by John Fante, and the Depression-era Chinatown, which earned him an Academy Award for best original screenplay in 1975.  He is currently working as a writer on the final season of AMC’s Mad Men.

In receiving the award, Towne credited the guidance and inspiration he has received from writers and other artists throughout his career.

“They have given me the advantage of their perspective and given it to me truthfully,” he said. “What I am standing on is their advice and help.”

Ridley and Rodman in their remarks acknowledged Towne’s work as inspiration to them and the community of screenwriters.

“I’m not sure this room has been filled with more wisdom than when Robert Towne stood here alone,” Rodman said.