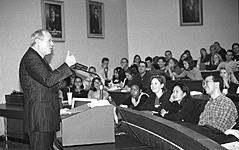 During a two-day visit to campus last month, U.S. Supreme Court Justice Anthony M. Kennedy dazzled a standing-room-only crowd of law students with a freewheeling discussion. Topics covered during the hour-long Thursday, Nov. 19, exchange included racial diversity among law clerks, the value of opening the highest court to television, the chances of splitting in two the 9th Circuit Court (which covers the West) and the importance of oral arguments. The man who has been described by the Washington Post as “the justice to watch” because of his tendency to cast the fifth – and deciding – vote even described how he spends his summer (teaching in Salzburg for one month, then reading and spending time with his family.) But he seemed to perk the most ears when he extolled the value of law school. “I know that you are very busy and pressed,” Kennedy told the students, “but believe me – you have more time and opportunity to reflect on law here than you will ever again.”