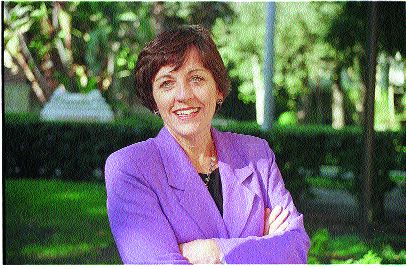 One reason Mary Dudziak chose to come to USC was because of the interdisciplinary focus of the law school. “I don’t believe in disciplinary boundaries. I think of myself as a citizen of the university.”

In the late 1970s, Mary Dudziak was up to her ears in the responsibility of being a grassroots organizer in Berkeley’s nascent disabilities rights movement.

“It was completely crisis management,” she said. “There was never any opportunity to sit back and reflect about larger issues: What does justice mean? What really is fairness?”

So when Dudziak eventually enrolled in law school, she positioned herself at the intersection of American law, history, society and culture.

Today, she’s an intensely interdisciplinary legal scholar who is as comfortable contributing to The Oxford Companion to the Supreme Court of the United States as exploring the relationship between Josephine Baker, racial protest and the Cold War or deconstructing W.E.B. Du Bois.

Dudziak’s research is also in the vanguard of an international trend sweeping studies of American history that explores global influences on domestic events. In a forthcoming book, for instance, Dudziak examines the long-overlooked connection between America’s Cold War policy and Brown vs. Board of Education — the famous Supreme Court case that outlawed segregation.

DUDZIAK STRIVES TO impart the same sweeping vista to her students in such courses as Constitutional Law, Civil Procedure, The Constitution in the 20th Century, and Law and Social Change in Postwar America.

“Good law schools are also about training students to think about the law and how to think broadly about everything related to the law,” she said.

Dudziak joined the faculty this fall as a professor after serving for a year as a visiting professor. Born in Oakland and raised in Santa Barbara, she comes to USC after rising through the tenure ranks at the University of Iowa, where for a decade she taught first as an associate professor and then as a full professor at the College of Law. In her last two years, she also had an appointment in Iowa’s history department.

A single mother with a 7-year-old daughter, Dudziak decided to return to Southern California in part to be close once again to her family. But the interdisciplinary focus of USC’s law school — where, in addition to a J.D., many faculty have a Ph.D. in another discipline — was particularly attractive.

“I don’t believe in disciplinary boundaries,” she said. “I think of myself as a citizen of the university.”

In fact, there probably never was much hope for pigeonholing Dudziak, the second of four children of a homemaker and nuclear physicist whom she calls “the only small-businessman in the nuclear defense industry.” She said her high school teacher sent her off to college to become the great American novelist. But she eventually settled into UC Berkeley’s sociology department, which proved to be the ideal background for an activist in the Center for Independent Living in Berkeley in the late 1970s.

As a “walkie” — or an able-bodied assistant for Judith Heumann, a post-polio quadriplegic and one of the early leaders in the disability rights movement — Dudziak coordinated grassroots political efforts to expand independent living programs and transportation access for the disabled. She also came to edit an amicus brief in the first Supreme Court case interpreting the first civil rights act for people with disabilities.

“The experience helped me see a portion of the law that I hadn’t seen before — people using law as the vehicle for social change,” she said.

But even when she applied to law school Dudziak felt that she “wanted something more,” so she headed for Yale’s Law School, which has a reputation like USC’s for being interdisciplinary. She figured she’d earn a master’s degree in something else along the way.

She credits former Supreme Court Justice nominee Robert Bork, who is known for his literal interpretation of the Constitution, with driving her to study American history.

“He was my constitutional law teacher,” Dudziak said. “He was interested in history only in terms of the intentions of the framers. My sense was that changes in the world and nation and the people to whom the Constitution applied simply had to matter, had to be part of the dialogue.”

Eight years after completing law school, Dudziak wrapped up a Ph.D. in American studies from Yale while teaching law at Iowa.

It was during her first year of teaching that Dudziak stumbled upon the kernel of her forthcoming book, Cold War Civil Rights: Equality as Cold War Policy, 1946-1968.

MOST PEOPLE TODAY don’t realize that the Topeka Board of Education — the defendant in the landmark case — had decided to abandon segregation and adopt a modest desegregation plan before the Supreme Court decided the Brown case. The board of education left the case to Kansas’ attorney general’s office, which pursued it less than enthusiastically by assigning it to an assistant attorney general who had never argued an appeal.

Dudziak’s eyes lingered on the line in an old newspaper account: Un-American — the concept seemed more reminiscent of the era’s darkest hour than its finest. Is it possible, Dudizak asked herself, that such a progressive case was in some way a product of the profoundly regressive McCarthy era?

“Once I asked the question and started looking around, the evidence of the connection was all over the place,” Dudziak said. “When you looked at the New York Times on the day after Brown was decided, the case was called a ‘blow to Communism.’”

T he book will chronicle how and why the Cold War-era State Department became a key — if unlikely — player in the civil rights battle.

“The issue of race discrimination in the United States was perceived as a kind of Achilles heel,” Dudziak said. “The concern on the part of the State Department and U.S. allies was, ‘How can the U.S. argue to the people of the world that democracy is a more moral form of government — a form of government that protects the rights of the individual — when African-American children are segregated?’”

Howard Gillman, an associate professor of political science who has read the manuscript, calls the work “an enormous contribution.” But Dudziak says she won’t feel like she has fully rebutted Bork until her next book.

“I want to look at the role of the Constitution — not just the law or the courts — in American culture, politics and society,” Dudziak said. “We’re at the end of the century; it’s time to go back and think about what the Constitution has meant for the American century.”

A Legal Scholar Who Crosses Boundaries