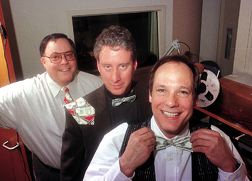 From left: Jim Russell, general manager of Marketplace; David Brancaccio, anchor/senior producer; and J.J. Yore, executive producer, believe their neckwear says it all. The daily business show is a “program about everything that has to do with money, seen through the lens of business and economics,” said Russell. Marketplace appeals to a broad group of listeners, many of whom thought they weren’t even interested in business.

Once on the verge of being canceled for lack of funding, the duPont Award-winning program produced at USC now reaches a weekly audience of 3.3 million. “Given the tumult of the past decade, it is very gratifying to have survived and prospered,” said Marketplace Productions General Manager Jim Russell.

Marketplace is produced in Los Angeles by Marketplace Productions at USC — the only U.S. university to produce a daily national news program — and distributed worldwide by Public Radio International. Marketplace is also the only nationwide daily news show produced on the West Coast.

THE SHOW WILL observe its anniversary with a series of weekly features highlighting major shifts in the business and economic picture, looking back at the past decade and forward to the next 10 years.

Each feature will use taped segments of events covered on Marketplace a decade ago and will examine what has happened to the story in the 10 years that followed — for example, the disappearance of once-prominent business names, such as Braniff and Pan Am, and President Gorbachev’s calls to increase Western-styled economics in the Soviet Union. Other segments will examine decade-old business and economic predictions and predictors to see what actually happened to both.

“The Dow [10 years ago] was at a little over 2,000, and President Bush talked about what to do with the Soviet Union,” said Executive Producer J.J. Yore. “It’s quite startling to be reminded of how much the world has changed in just a decade.”

MARKETPLACE premiered on Jan. 2, 1989, from a hastily built studio in Long Beach, affiliated with KLON-FM, the radio station of Cal State Long Beach. The show was heard initially on 77 stations, reaching about 663,000 listeners. Today the program airs on 262 stations in the afternoon and 225 in the morning, and has quintupled its listenership, now reaching a cumulative weekly audience of 3.3 million.

“Everybody who reports on business likes to think they’re targeting CEO readers and listeners,” Russell said. “Even if you could attract all of the Fortune 500 CEOs, that still would be a very small audience. Instead, Marketplace’s audience consists of business people and a large number of typical public radio listeners — bright, educated, but not necessarily businessmen or economists.”

One listener wrote: “I’m not interested in business news, I don’t understand economics, I have math anxiety and I love your show. Why?”

“It’s not just a business show,” Russell explained. “It’s a program about the whole world, everything that has to do with money, seen through the lens of business and economics.”

BUSINESS NEWS can be “dreadful” in the wrong hands, said Marketplace host and senior producer David Brancaccio. “But there is a way to keep coverage of the world of money smart without banishing all wit, irony and attitude,” he said.

Brancaccio, host of the show for the past five years, added: “Players in financial markets are full of attitude. At Marketplace, the idea is to keep our coverage smart, while letting some of that edge, some of that wit, and certainly some of that incisiveness come through.”

Russell was hired by the Public Radio International network in 1988 as a consultant to evaluate an existing PRI-distributed business show. “I told them it was excellent,” said Russell, who helped to develop National Public Radio’s news programs “All Things Considered” and “Morning Edition.”

“That’s the wrong answer,” he was told. “Then why are you asking me? I’m not a businessman,” he replied. The network’s response: “Think about a show that you would listen to.”

The timing was right for a new business show with a broad perspective. “It was the end of the Milken-Boesky scandals and greenmail and the beginning of an appreciation of the global economy,” Russell recalled. “In retrospect, if someone had asked ‘When should we launch this program?’ the answer would have been, ‘Right then.’”

Steve Salyer, president of Public Radio International adds: “Marketplace recognized well before others that ‘business’ was the prism through which to understand the changes sweeping our world, changes in which every listener has a stake and could be interested.”

By the middle of Marketplace’s first year, though, funding ran out. “We were within three days of laying off our small staff and closing down,” Russell said. “That’s when USC Radio stepped in and saved the program.” On Jan. 1, 1990, General Electric became the program’s exclusive corporate underwriter. Fannie Mae, Archer Daniels Midland Co., DLJ Direct, Westlaw and the Financial Times also provide funding.

IN RECENT YEARS, Market- place has focused on producing lively features of interest to the general public. These have included “Dying for Business,” a series on the funeral industry; “Divorce Inc.,” about the costs of ending marriages; “When I’m 64,” Robert Reich’s documentary on security in old age; and “Free Market Freefall,” analyzing the world’s financial crises.

In January 1998, the show won the duPont Columbia Award for excellence in jour- nalism. The year before, Marketplace won the Gerald Loeb Award for Distinguished Business and Financial Journalism.

The program is broadcast by more than 262 public radio stations, and heard around the world via the American Forces Radio & Television Service. PRI also makes the program available via the World Radio Network, a direct broadcast satellite channel serving Europe, Asia and Africa.

Marketplace: A Decade of Business News Not as Usual