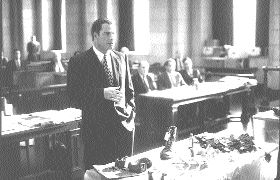 In the real-life story of an epic courtroom showdown, John Travolta stars as attorney Jan Schlichtmann, who stakes his practice, professional and personal reputation and everything he owns in a celebrated personal injury case in Touchstone Pictures’ legal thriller A Civil Action. The film has captured USC’s 11th annual Scripter Award.

Jonathan Harr’s novel A Civil Action was adapted for the screen by Steven Zaillian. Harr and Zaillian will be honored with crystal book awards March 13 at the Scripter Award black-tie dinner in USC’s Doheny Memorial Library. Comedy writer Hal Kanter will serve as master of ceremonies.

Also presented — for the first time — will be the USC Literati Commendation. The Literati Commendation will be awarded annually to the individual, corporation or organization that has contributed to society’s capacity to communicate and has promoted the expression of ideas and opinions for the common good. The inaugural award will be presented to the Los Angeles Times for its “Reading by 9” initiative.

Director-screenwriter Anthony Minghella chaired this year’s selection committee of film and literary professionals. Minghella won a Scripter Award in 1996 for his film The English Patient.

Sponsored by the Friends of the USC Libraries, the Scripter Award is given to the author of the book on which an English-language film is based and to the screenwriter who adapted the book for the screen.

In addition to The English Patient, previous winners include Sense and Sensibility, The Shawshank Redemption, Schindler’s List, A River Runs Through It, Fried Green Tomatoes, Awakenings, The Accidental Tourist and 84 Charing Cross Road.

For more information or for tickets to the USC Scripter Awards Dinner, call Karin Berger at (213) 740-2328.