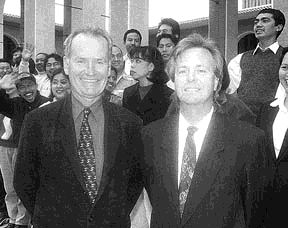 A 20-YEAR OLD MULTIDISCIPLINARY and international program at the Marshall School of Business has become the model for an innovative new program in the School of Policy, Planning, and Development.

Policy, Planning, and Development’s 6-month-old International Public Policy and Management program (IPPAM) “could be considered a grandchild or great-grandchild” of the Marshall School’s International Business Education and Research (IBEAR) program, said Glenn Melnick, professor of public administration. “Faculty and administrators from the Marshall School really helped us structure our program after their successful model.”

Like the IBEAR program, IPPAM is a one-year intensive master’s-level program that utilizes professors representing a wide range of disciplines.

“Unlike it’s IBEAR ‘parent,’ IPPAM is designed for the experienced public sector — rather than private sector — manager,” said Richard Drobnick, USC vice provost for international affairs and executive director of the IBEAR program.

“Melnick’s goals are to recruit mid-career public policy people as opposed to mid-career business people, and he intends to build the class up to 10 to 15 nationalities, including Americans, within four to five years,” Drobnick said.

“We hope IPPAM is as successful in developing public-sector leaders as IBEAR has been in developing private-sector leaders. For example, a manager who is now president and CEO of Korean Air graduated from the IBEAR MBA program in 1979; he’s now a USC trustee,” Drobnick said of Yang Ho Cho. “In Indonesia, the president of the largest telephone company, INDOSAT, is a 1990 IBEAR graduate. And Japan’s Nippon Telephone and Telegraph have sent two or three of their mid-level executives to the IBEAR program.”

And like IPPAM, IBEAR uses professors from political science, history and international relations to give lectures and to organize seminars, Drobnick said.

That two-way exchange pays off in the long run, said Kazi Mamun, director of the Undergraduate Student Affairs Office at the Marshall School.

“There have been many instances where business people from other countries have been upset because protocol according to their customs was not maintained,” Mamun said. “Our students won’t make those kinds of mistakes. We teach them how to deal with the social, political and cultural differences of each country.”

Both IBEAR and IPPAM are aligned with USC’s strategic goals, Melnick said.

“We are interdisciplinary and we are international,” said Melnick, who is the Blue Cross of California Professor of Health Care Finance. “What’s more, the program will help stabilize the retention of foreign students from the Pacific Rim.”

In this first year, IPPAM is concentrating on recruiting mid-career health professionals from the health industry, Melnick said.

“More than 60 percent of our students this year are either doctors or dentists from Indonesia, China, Japan and India,” he said. “Some of them are managers of medical clinics, some are provincial health officers and some are analysts on World Bank projects. This program acts as a magnet for high-level policy-makers to come to USC; it gives us high-level exposure.”