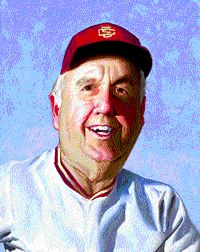 He put USC baseball — indeed, one might argue college baseball — on the map in the modern era and spearheaded the growth of the amateur game nationally and internationally.

Legendary former major league managers Tommy Lasorda and Sparky Anderson have both gone on record as stating that Rod Dedeaux ranks as one of the all-time finest coaches, regardless of level, ever to grace a baseball field.

Winning NCAA championships and coaching future pro stars were far from Dedeaux’s only endeavors on behalf of what he promotes as the international pastime. In 1974, President Richard Nixon selected Dedeaux to supervise a baseball clinic in Panama. Dedeaux was head coach of the USA team that competed in the 1984 Los Angeles Olympics, where baseball was a demonstration sport. He founded and served as general manager of the USA-Japan Collegiate World Series for many years and was honored in 1996 by the Japanese government with the Fourth Order Of Merit-Cordon of the Rising Sun.

Rod Dedeaux: A Coach For the Century