The next generation of scientists is turning to stem cells to advance understanding of systems ranging from the blood to the brain or the liver to the lungs. Six of these scientists presented their research at the Junior Faculty Candidate Mini-symposium hosted by USC’s Department of Stem Cell Biology and Regenerative Medicine. 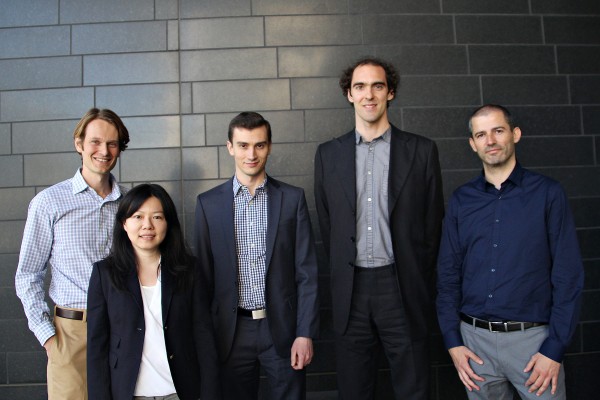 Alexander Pollen from the University of California, San Francisco addressed a fascinating chapter in the history of life on Earth: the evolution of the human brain over the last 6 million years. He discussed how neural stem cells contribute to brain development, how a particular genetic variation may be responsible for increasing brain size and improving learning in humans and how scientists can use stem cells to learn more about this complex organ.

“When we compare the human brain with the brain of other mammals, we can ask what’s special about our brains,” he said. “What I’m interested in studying is the molecular basis for specializations of the human brain, such as cerebral cortex expansion, over the last 6 million years.”

Anemia in a petri dish

Sergei Doulatov from Boston Children’s Hospital and Harvard Medical School explained how to use stem cells to model anemia in a petri dish. He exposed these cells to drug-like compounds, one of which suggested a way to treat a form of the disease known as Diamond-Blackfan anemia.

“You can get patient-derived [stem] cells very easily and use these cells to differentiate into abundant patient-specific progenitor [cells], which then can be put back into patients as a form of cell therapy,” he said. “In the meantime, we’re also thinking hard about how we can use these cells for disease modeling and drug screens.”

Hsiang-Ying (Sherry) Lee from the Whitehead Institute for Biomedical Research offered an equally sanguine view of the potential of blood progenitor cells to treat anemia. She described how environmental and molecular signals trigger these progenitor cells to self-renew by replicating themselves or to differentiate into red blood cells and other mature cells.

“The questions that I’m most interested in are: How do the stem cells and progenitor cells integrate different environmental signals to make the binary cell decision to self-renew or to differentiate? And how can self-renewal capacity be manipulated for therapeutic purposes?” Lee asked.

Joan Font-Burgada from the University of California, San Diego discussed another regenerative cell type: liver cells, which are helpful when they repair injuries, but harmful when they cross the line into cancerous proliferation. He identified a group of highly regenerative liver cells, dubbed hybrid hepatocytes, with great potential for transplantation to treat liver disorders. He also illuminated the genetic signals that unleash cholangiocarcinoma, an aggressive bile duct cancer.

“My general scientific interest is this relationship between tissue regeneration and cancer development,” he said, “and specifically in the liver, the association between chronic liver disease and liver cancer development.”

Purushothama Rao Tata from Massachusetts General Hospital also touched on the nexus between regeneration and cancer. He highlighted how lung cells maintain a high degree of “plasticity,” or the ability to become other cell types in health, injury and redevelopment, also known as tumorigenesis.

“Looking at all my studies — for example, in cellular plasticity, cell-cell communication and in this tumorigenesis process — one thing I notice is there is an inter-conversion between each cell type,” he said. “For example, a secretory cell [that produces mucus] can turn into a basal cell [that lines the lungs]. Or lung tissue can actually turn into [cell types] seen in the stomach and [the section of the small intestine known as the] duodenum. So what I’m trying to say here is that these tissues, they’re trying to inter-converge into one of the other types in pathological conditions.”

Expanding the conversation to the field known as “synthetic biology,” Leonardo Morsut from UC San Francisco introduced “synNotch,” a group of synthetic signals that can direct the behavior of cells. Scientists can use synNotch to elicit specific cell responses — such as differentiating into other cell types and organizing into structures. Eventually, synNotch or a similar system could enable scientists to engineer and study tissues with special properties, such as enhanced injury resistance or regenerative capacity.

Of course, when you start to build tissues, you want to start building useful tissues, and the whole discipline devoted to that is tissue engineering.

“Of course, when you start to build tissues, you want to start building useful tissues, and the whole discipline devoted to that is tissue engineering,” he said. “And I really think synthetic biology can help by adding another layer of control to provide useful and user-defined tissue structures.”

Andy McMahon, chair of the Department of Stem Cell Biology and Regenerative Medicine, thanked these top candidates for junior faculty positions at USC for sharing their inspiring work.

“I’d just like to thank all of our speakers,” he said. “It’s been a spectacular day.”

The new one-stop shop allows scientists to take stem cell research to the next level and eventually develop translational therapies.

Albert Kim applies his expertise to the challenge of kidney regeneration.