An open hand gives in abundance, even as it receives.

It’s a saying that has been passed down in Robynn Cox’s family for generations. It’s also a maxim that has guided her research on the societal and economic consequences of mass incarceration, particularly in the black community.

“When people are marked with a criminal record or the stigma of incarceration, there is a lot of judgment passed, and people give up on those individuals,” she said. “I’m really passionate about helping people, and everybody deserves a second chance.”

As the newest member of the faculty at the USC School of Social Work, Cox plans to focus her research on understanding historical disparities related to the prison system, exploring how to help incarcerated individuals develop useful skills and prepare to reenter society, and calculating the external costs of criminal justice policies and incarceration.

A fourth-generation native of Los Angeles, she grew up in the Crenshaw District and Culver City, where her childhood experiences instilled a strong interest in issues of social justice.

When you incarcerate a particular group, pulling so many men out of a particular community where people are already disadvantaged, there has to be some sort of social consequence.

“Knowing the history of incarceration and slavery and policing, including my own personal experiences having family members affected by that, drew me to the topic and wanting to understand it more,” she said. “When you incarcerate a particular group, pulling so many men out of a particular community where people are already disadvantaged, there has to be some sort of social consequence.”

As an assistant professor of economics at Spelman College, Cox conducted research on the effects of mass incarceration on black women, including employment outcomes, family relationships, and physical and mental health. She has also worked closely with the USC Leonard D. Schaeffer Center for Health Policy and Economics as a scholar affiliated with its Minority Aging Health Economics Research Center.

While studying economics at Duke University as an undergraduate and later at Georgia State University, where she earned a master’s degree and doctorate in economics, she became increasingly aware of the societal effects of criminal justice policies.

Federal grants that support the hiring of more police officers to wage the war on drugs, for instance, can lead to racial disparities in arrest rates. Families that experience incarceration are more likely to struggle with food insecurity, regardless of their employment status.

Even well-intentioned efforts, such as removing the item on job applications asking about prior felony convictions, may have unintended consequences. Research has shown employers that don’t use background checks hire fewer black men. 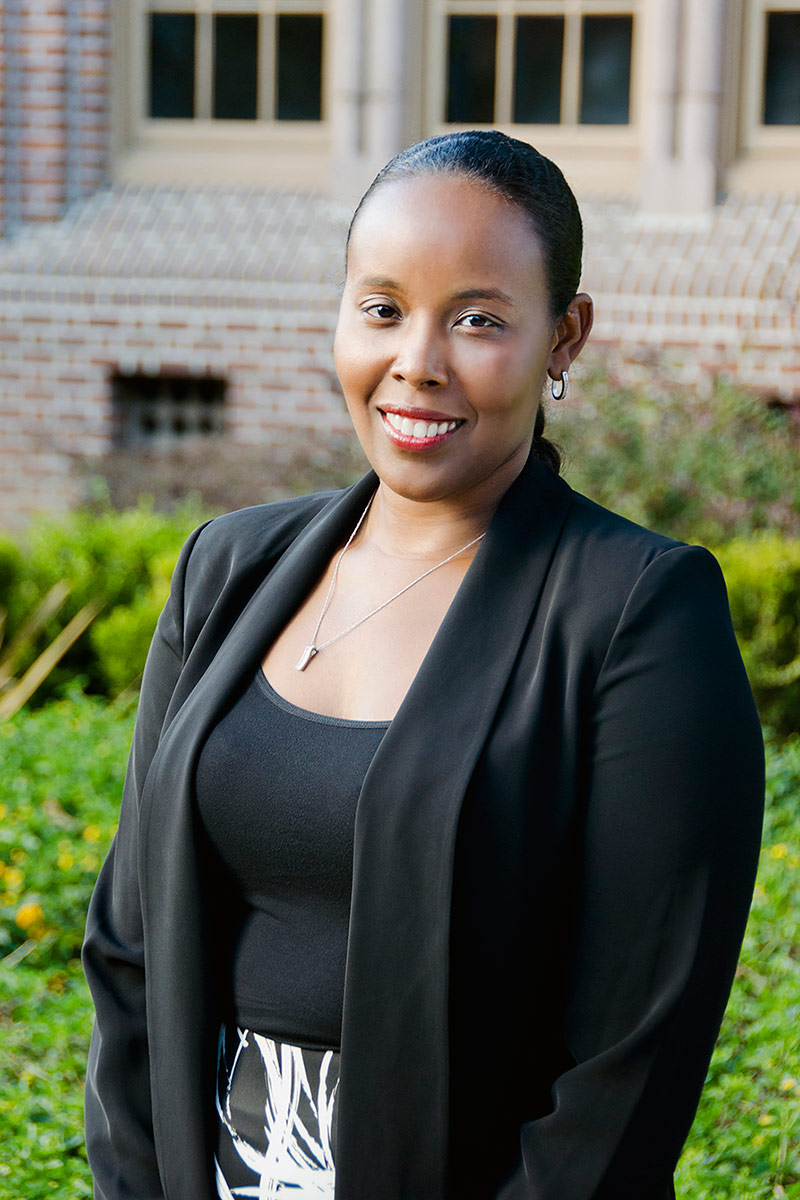 A background in economics will help Robynn Cox. (Photo/Eric Lindberg)

“This can be tied to perceptions in society of criminality,” Cox said. “Because they know black men are more likely to have a criminal record, it might actually lower employment. It’s not that we shouldn’t have something like ban-the-box legislation, but you might also have to educate these employers about that tendency to statistically discriminate.”

The disproportionate effect of incarceration policies on certain racial and ethnic groups is clear. For example, in 2013, approximately 37 percent of imprisoned men were black, despite this group constituting only 13 percent of the U.S. population, according to a U.S. Department of Justice report. Although white women comprised a larger share of all incarcerated women, the imprisonment rate was twice as high among black women compared to white women.

How did these policies end up landing so heavily on this segment of the population?

“This is something we are currently grappling with as a nation, particularly policing in the African-American community,” Cox said.

She hypothesized that the nation’s legacy of discrimination and racism, coupled with socioeconomic factors, has generated a dual criminal justice system with a skewed balance between civil liberties and enforcement powers.

To illustrate the point, Cox described how people became more willing to give up certain civil liberties in the wake of the Sept. 11 attacks to ensure their safety, such as acquiescing to increased security at airports.

Race can become a wedge in that tradeoff between safety and freedom, she said. Members of the majority may be willing to have stricter laws that increase the size of the incarcerated population because they know those laws won’t be applied in full force in their community.

“Because they are not bearing the full burden, they are able to operate with their civil liberties intact and maintain these strict-on-crime policies,” she said.

Using code words can also influence how people feel about criminality. When asked about combating crime in general, people tend to prefer social programs. When asked about fighting “urban” crime, they lean toward incarceration and stringent law enforcement.

Dehumanization of certain groups also justifies the lack of investment in social programming, Cox said. Why invest in a population that is viewed as unfixable?

“These individuals are no longer seen as worthy of having the full rights of a citizen,” she said. “This is in no way, shape or form to say we should let murderers go free. These are all symptoms of a broader issue that we need to shed light on.”

As an assistant professor at the USC School of Social Work, she plans to continue exploring this broader effect on society, including an ongoing research project with the Schaeffer Center investigating connections among health, aging and imprisonment.

One particular finding suggests that people who are incarcerated are more likely to have been knocked unconscious due to head trauma. Cox is considering how such an injury might affect everyday functioning among older adults, including the ability to maintain employment and engage in interpersonal relationships.

Ultimately, as she continues to delve into these complex topics surrounding mass incarceration, Cox said she will keep her family’s advice in the back of her mind.

“My mother always raised us to help others, and I’ve always wanted my research to inform policy with the hope that it will make a difference,” she said. “Being at the USC School of Social Work will definitely help me achieve that goal.”

Human rights activist sets out to change the system for prisoners with mental health problems.

Teaching social and emotional skills may contribute to academic success

A holistic approach to education is needed to nurture the skills, researchers find.

To see how society works, take a closer look at its intersections

Putting people behind bars has hidden costs for society