A few years ago animator Yo-Yo Lin was studying in Florence as part of a study abroad program for USC School of Cinematic Arts animation students. 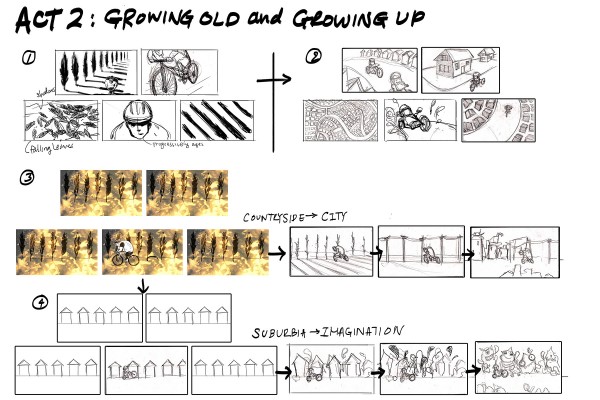 A sketch shows the sequencing of Ricerca. (Photo/Courtesy of Yo-Yo Lin)

She was enjoying soaking up the contemporary Italian arts scene when she came upon an installation piece using multiple screens and low frequency sounds.

“I loved that people were able to walk around and interact with it however they wanted,” she said. That gave Lin the idea that would become her thesis project. “Would it actually be insane to make a film that has a story with multiple screens in a room with a soundscape?” she thought. And that is how Ricerca was born.

Ricerca (pronounced ri-cher-ka), Italian for “search,” is an animated film that tells the story of a man who realizes he has lost something and journeys through his memories to find it. What begins as a physical journey becomes increasingly more abstract as he searches his mind for his lost sense of happiness.

Ricerca is made particularly interesting by the way it is told. There are five separate projection screens showcasing a variety of mediums, including ink hand-drawn 2-D animation, photography, printmaking and painting on film leader. Those visuals combine with eight audio channels to create a 12-minute viewing experience that took Lin nearly a year and a half to complete.

While the story is universal, each individual’s viewing experience is unique. There is no correct way to view Ricerca, or to interact with the piece. The experience depends on the viewer’s perspective and many factors affect how the story unfolds — from the direction the viewer takes walking into the room to turning at a certain angle or even point in time.

Ricerca debuted last May at USC to positive feedback, and a few months later Lin and producer Will Cherry ’15 began the process of submitting it to South by Southwest’s PanelPicker series, in which the public is able to vote and have a say in what projects and panels are featured at the festival.

While they’re ecstatic about being accepted and getting to attend SXSW, which kicks off today, there’s still lots of work to be done. Ricerca is part of the festival’s Digital Domain program, which features projects that are innovative in the way they tell stories. They could not be granted the physical space needed to set up Ricerca in its original configuration at the festival, so Lin has created a virtual reality version of the installation.

Lin and Cherry are now looking to take Ricerca all over the world. They hope the virtual reality demonstration at SXSW will generate enough excitement that people will want to have it set up elsewhere.

“More than anything,” Cherry says, “We want to see it put back up in its physical form again.”

Standout soprano ready for her moment on opera’s big stage

Musicians can check one off their bucket list: ‘I played the Troubadour’

Seniors perform original music at the legendary West Hollywood venue where many of their idols have played.