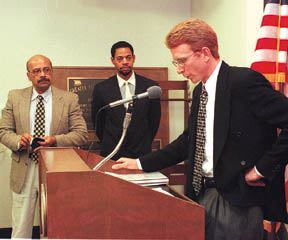 Historian Philip J. Ethington speaks at a Tuesday, Feb. 9, press conference on the results of his study of the Los Angeles City Human Relations Commission. From left are Joe Hicks, the commission’s executive director and a longtime civil rights activist, and the study’s co-author, Christopher West, a doctoral candidate in history.

The Human Relations Commission of the city of Los Angeles urgently needs a stronger mandate, higher funding and a sharper focus in its formulation and implementation of policy, a USC study suggests.

“The commission is responsible for many important activities, but the bulk of its efforts have been episodic, one-time interventions with little or no follow-up,” said historian Philip J. Ethington, lead author of a study titled “The Challenge of Intergroup Relations in Los Angeles: An Historical and Comparative Evaluation of the Los Angeles City Human Relations Commission, 1966-1998.”

“In contrast, commissions elsewhere have established relations with state and federal agencies charged with enforcement of civil rights and fairness legislation, essentially subcontracting to serve as local watchdog agencies,” said co-author Christopher West, a doctoral candidate in history at the USC College of Letters, Arts and Sciences.

Ethington and West spent 18 months researching the commission’s activities and accomplishments, going back to its founding in the wake of the 1965 Watts riots. The researchers then compared the commission’s mandate with those of human relations commissions in 12 other metropolitan areas.

• Self-evaluation of effectiveness. As far as the USC researchers could determine, the commission maintains no archive. “The HRC has not kept track of its own activities and so has had little possibility of monitoring, and intervening in, the city’s intergroup relations problems in a systematic way,” the report states.

• Research activities. The team could find only two examples of systematic research in the commission’s history – a school-integration questionnaire in 1966 and a survey of attitudes in Baldwin Hills and Pacific Palisades in 1985. The team was initially pleased to learn that the HRC in 1994 created a “Report Card Committee” charged with creating an annual evaluation of the status of ethnic and racial relations in the city. “But nothing further was accomplished, and the idea languished,” the report states. Periodic formal hearings on topics as diverse as university admissions standards and transportation for the disabled have probably constituted the commission’s best attempts at research. But the great weakness of this approach has been “its reactive, crisis-driven and unsystematic quality.” Moreover, findings from such hearings rarely resulted in any policy.

• Policymaking. Without any relationship to research, policies have been driven primarily by the commission’s common-sense experience with what constitutes a human relations problem and what an effective intervention might be. “Common sense approaches can be supported by much ongoing research and theory, but they are woefully simple and do not approach the systematic quality of the best recent work in this field,” the report states.

The researchers found the HRC’s activities sorely lacking in comparison with those of several commissions elsewhere, especially those of New York City, San Francisco and Los Angeles County.

The New York City and Los Angeles County commissions both monitor and report hate crimes in their jurisdictions and maintain databases to help predict intergroup conflict.

The New York City commission is the only one of the three that operates satellite field offices to monitor neighborhood tension, pursues allegations of bias involving city agencies, and initiates investigations of hate and bias in the city at large.

The report urges the city of Los Angeles commissioners to seek a stronger legal mandate – a mandate that would empower the HRC to enforce state and federal equal opportunity and civil rights law in housing, employment, affirmative action and immigration. The commission’s current enabling ordinance only mandates positive interventions, such as “promoting good will.”

TO BOOST THE commission’s effectiveness, the report also recommends the following steps:

• Focus exclusively on intergroup conflict and injustice “so as not to slip into the vague status of promoting good citizenship or chasing after any social problem that arises.”

• Maintain a solid, visible presence in local neighborhoods. The report recommends deploying at least 15 satellite field offices – one for each council district – to report neighborhood concerns. Commissioners recently deployed five roving field officers, but the HRC needs to develop “a clear plan for establishing a much more permanent and visible presence,” the report states.

• Establish a permanent relationship with social scientists based at Los Angeles-area universities, so that the commission’s policies and interventions can be informed by the latest empirical research and evolving theoreti-cal models. “For decades, social scientists at UCLA, USC, Loyola Marymount, CSU Northridge, CSU Fullerton and CSU Dominguez Hills, Occidental College and other local institutions have been conducting research specifically relating to intergroup relations,” Ethington notes. “We found virtually no evidence that the HRC has taken advantage of this massive body of expertise.”

• Adopt a systematic approach to conducting research and to translating that research into strategic policies and interventions, as well as to evaluating the outcomes of commission interventions.

The commission’s finest hour, the researchers believe, came in the late 1960s and early 1970s, when the HRC monitored the first weeks of school integration and conducted some of the city’s earliest hearings on the racially discriminatory use of force by law enforcement officers. But even then, the commission had a tendency “to chase extraneous problems.” By the mid-1970s, commission staffing levels had dropped from a peak of 16 to a single employee. Through the late 1980s, the commission drifted, printing brochures with emergency phone numbers, holding a hearing on inflation and honoring celebrities deemed to be good citizens.

Staffing and funding levels remain “nothing short of neglectful,” the report concludes, and are largely to blame for the HRC’s lackluster performance. At a time when the New York City commission has a budget of $7 million and a staff of 147, the city of Los Angeles commission operates with an annual budget of $930,000 and a staff of 11.

“The HRC has often found itself in a vicious cycle,” Ethington notes. “Understaffed and underfunded, it could do little more than offer public relations gestures. Lacking a clear, strategic approach, it tried to chase the spotlight of public opinion.”

Since commissioning the study, the HRC has undergone a pronounced change in leadership: Only four of the original 11 commissioners remain. Joe Hicks, a longtime civil rights activist, was appointed executive director a year ago and has worked hard to rebuild the commission’s presence and activities.

“Our report is intended to assist the commission’s efforts to find a firmer footing,” said Ethington, an associate professor of history.