Every screenwriter knows that the first draft is just the beginning — there will be edits and perhaps even complete rewrites. This knowledge, however, doesn’t make rewriting any easier. Especially hard is answering that first, most important question: Where to start?

In his new book Screenwriting Is Rewriting: The Art and Craft of Professional Revision, USC School of Cinematic Arts Professor Jack Epps Jr. offers the answer to that and every other question relevant to producing the polished fifth, 15th or 50th draft needed to take an idea from interesting pitch to a marketable script that’s ready to be sold or produced.

As a screenwriter, Epps is known for films like Turner and Hooch, Anaconda, The Secret of My Success, Legal Eagles and Top Gun, one of the most popular movies of the last 20 years. Those were all movies that he was either brought in to write or to rewrite, based on someone else’s ideas.

“Rewriting is truly the reason why I think I had a successful career,” Epps said.

It’s also what most screenwriters will spend their career doing.

“A great deal of work in Hollywood is rewriting work in terms of coming on and adding something to a script,” Epps explained. “Your spec script is your calling card. The chance of somebody making your spec script is very low. But the chance of somebody liking your writing and saying ‘I’ve got this project and I need to have a draft done and I like what you’ve done’ — that’s where you’re going to find the work.”

At SCA, Epps is chair of the Writing for Screen & Television Division (and co-founder of the USC Comedy program), where he oversees a curriculum covering every aspect of writing for large and small screens, including a rewriting class he’s been teaching for several years. 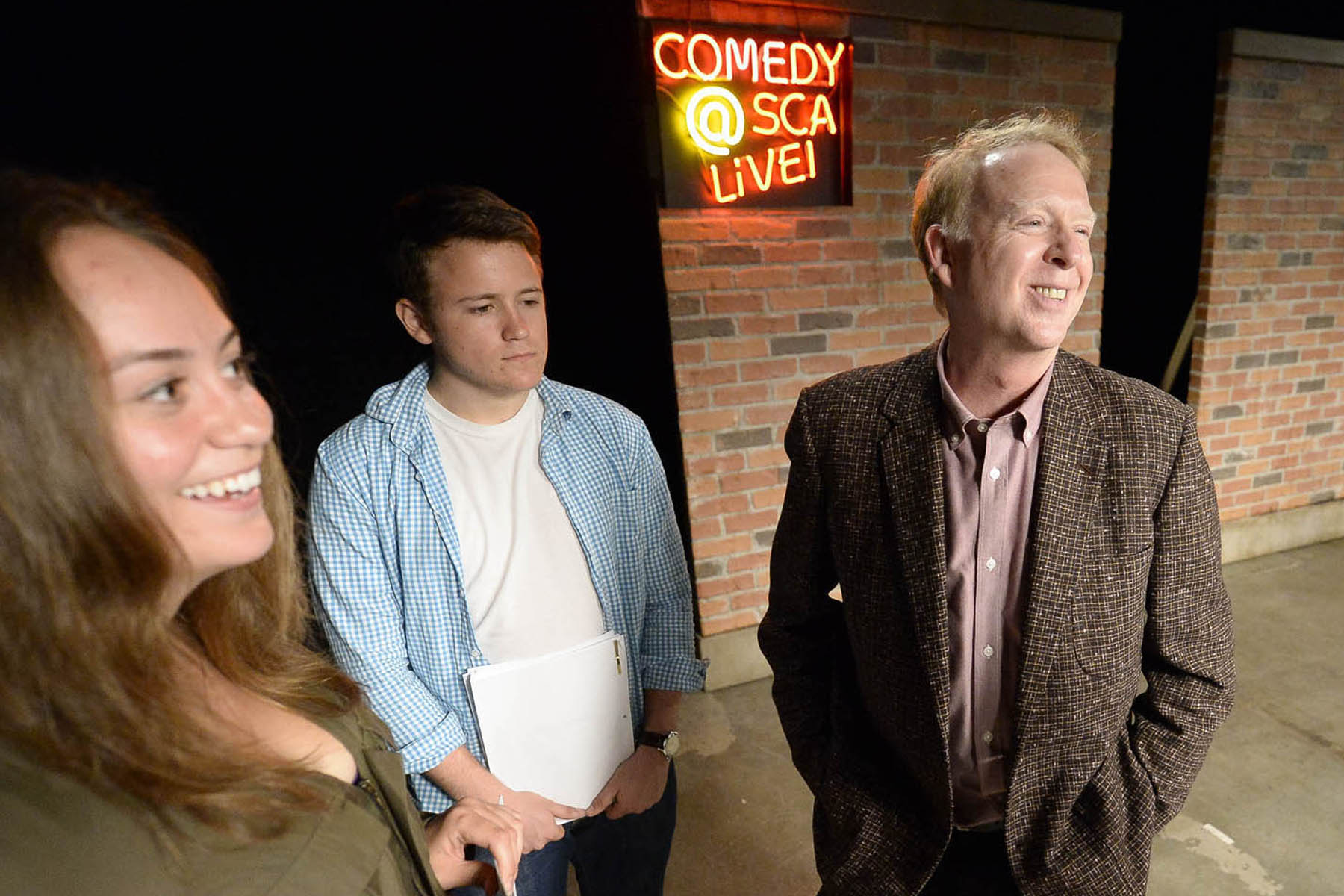 Liz Frederick and Matt Keibler, center, with Jack Epps Jr. during the production of a live sketch comedy class in 2014 (USC Photo/Gus Ruelas)

The instruction he created for his students inspired the project but, ironically, it was while rewriting the book that Epps hit on the essential idea that makes it unique: Screenwriting Is Rewriting is a book about both writing and rewriting.

“The big surprise was you can’t just say ‘rewrite the characters’ because you have to first say what is a character,” Epps said. “I couldn’t assume people understood truly what it means to have a deep character or where character comes from. So what became really clear is that it’s not just a book about rewriting, but it’s a book about screenwriting and going over fundamentals. Because rewriting is about stepping back and looking at your basic fundamentals and then applying those again.”

Epps had a long-distance writing partnership with his former Professor Jim Cash, who continued to teach at Michigan State University. Because they were seldom in the same room, the two had to develop a rewriting system that was fast, efficient and yielded studio-ready drafts. Their approach, which Epps dubs “The Pass Method,” eschews a beginning-to-end rewrite, instead pinpointing passes specifically focused on character, story, dialogue, structure, etc.

You’re better served by doing small individual passes on a script than trying to do one gigantic rewrite and trying to fix everything.

“You’re better served by doing small individual passes on a script than trying to do one gigantic rewrite and trying to fix everything,” Epps said. “Because what I found from trying that is you virtually almost fix nothing and the script is not really better because you’re trying to serve so many masters that you serve none.

Another aspect of Epps’ approach that seems downright inventive: He advises the first thing to do before a rewrite is not to figure out what’s wrong with the script, but what’s right. That doesn’t mean you won’t get lots of notes about what needs fixing, and Epps devotes two chapters to receiving, organizing and interpreting notes (he even shares studio notes from two of his projects: Turner and Hooch and a rewrite of Sister Act).

“Because nobody rewrites the same way, I thought it would be interesting to bring in other people,” he said. “And these are people who I respect greatly. What I don’t want to come out of it is people saying, ‘Oh, I have to do it this way.’ What I hope the book does is inform people how to create their own process.”

As every screenwriter quickly learns, there really is no writing without rewriting.

“Rewriting is difficult for everyone to accept because you’re happy you’ve finished a draft,” Epps said. There’s also no other book that breaks down the rewriting process the way Jack Epps does in this book. And that’s what makes it essential.

“I really wanted to have a conversation in this book. I assume the people who are reading it are writers so I’m talking to a writer. I also respect the people who are reading it because this is really hard; it’s harder than you think it is. So I’m just saying, ‘Hey, this is how we are going to do this, and this is how you can do this.’ And I hope people take away from this book their own sense that they can accomplish this.”

Because, Epps said, writing may be writing, but that doesn’t mean it’s a joyful process.

“Nobody writes something to take it apart,” he said. “But the truth is you take it apart. You have to. And it usually gets worse before it gets better.”

And that’s why every screenwriter needs a rewriting guide.

Sixty students cope with chaos on the set and drama behind the scenes during the hectic production of three live TV shows.

USC filmmaker takes his shot at consequences of gun violence

Professor Jeremy Kagan reflects on upcoming film about the lives of three characters upended by a firearm.