Deutsch, a political economy major at the USC Dornsife College of Letters, Arts and Sciences, was one of three finalists in the annual tournament — culminating in the final round Feb. 12 — and that topic was right in his wheelhouse. In 2014, he had interned on Capitol Hill for Rep. Chris Van Hollen of Maryland’s 8th congressional district.

This is something I know pretty well, Deutsch thought. Why not bet it all?

It was a smart decision. Moments later, Deutsch was crowned winner of the 2016 Jeopardy College Championship.

The clue that would decide the winner of the $100,000 championship seemed straightforward enough at first glance.

Deutsch had already scribbled down “Who is Robert Byrd?” when he sensed a trap.

January 2009? That’s when President Barack Obama was inaugurated, he remembered. With seconds to go, he scratched out Byrd’s name and replaced it with Joe Biden, a decision that would earn him the grand prize.

It was kind of surreal, to be honest.

“It was kind of surreal, to be honest,” he said. “I was just standing there, thinking: Did this just really happen?”

Deutsch is the fifth Trojan to appear on the long-running show’s College Championship since the tournament began in 1989. That year, a USC student reached the semifinals. The university was represented again at the championships in 2001, 2003 and 2007. The last Trojan contestant even enjoyed a home-court advantage because the show was taped at the Galen Center that year. But still no trophy.

This season, as Deutsch finally captured the top prize, clue crew staffer Sarah Whitcomb Foss ’98 discretely flashed a Trojan victory sign. A proud USC alumna, she came over and whispered in his ear: “It’s about time!”

Deutsch isn’t your stereotypical Jeopardy! groupie. While he enjoys the show, it was only after a former high school Quiz Bowl teammate took home $75,000 in prize money that Deutsch considered trying out.

Roughly 7,000 college students took the online test this past season, and 300 of them did well enough to be invited to New York for in-person auditions. Deutsch was one of 15 who reached the quarterfinals. Taped over two days at the Sony Pictures Studio in Culver City, the College Championship aired Feb. 1-12.

The first day of taping wasn’t too bad, “but the second day was kind of crazy,” Deutsch recalled. “I filmed three episodes in a row. They have a ton of lights and, they’re beating down on you. Everybody wears their college sweaters, so it’s hot from that, too.” 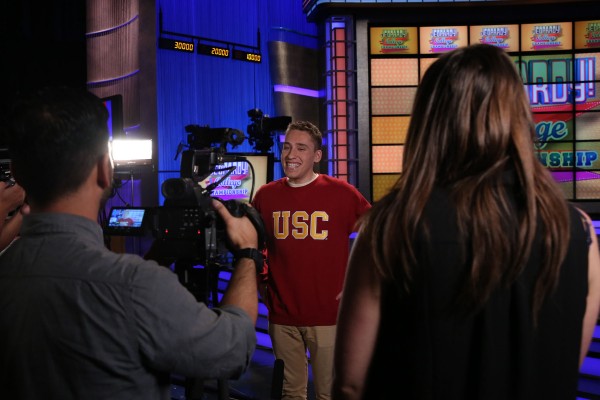 Deutsch is interviewed on the set of Jeopardy! (Photo/Courtesy of Jeopardy Productions Inc.)

Deutsch didn’t put pressure on himself to win.

“My goal,” he said, “was just to make the semifinals so there’d be a second game for my parents to go to.”

Deutsch’s mother, a pediatrician, and his father, an attorney, had come all the way from Maryland. “I would have felt bad if my family flew out just to see me play poorly,” he said.

Also in the audience were some buddies from his freshman year in Birnkrant Residential College. They gave Deutsch a psychological boost over contestants coming from far-away schools like Columbia, Brown, West Point and Northwestern.

“Not many people had five friends to cheer them on, which was awesome,” Deutsch said.

Thanks for the memory

In White Men Can’t Jump, Rosie Perez’s character prepares for Jeopardy! by memorizing The World Almanac. Deutsch prepared by “taking inventory of what I already know.”

Which is quite a lot. A National Merit Scholar attending USC on a Presidential Scholarship, he went through the rigorous Thematic Option program. “That has really provided me a broad base of knowledge,” he said.

On top of majoring in political economy — a hybrid of international relations and economics offered through USC Dornsife — he has minors in consumer behavior and business law, and has a part-time job as a financial services analyst for comScore Inc. All while holding down a 3.8 GPA.

He was a USC Dornsife Gateway intern at Discover Financial Services in Chicago last summer, working under the credit card company’s general counsel Kathryn “Kelly” McNamara Corley ’82. Currently he’s spending the semester abroad at Maastricht University in the Netherlands, pursuing his interest in the economics of the European Union.

Deutsch hopes someday to build a career as a policymaker in Washington, D.C. After graduation next year, he plans to go on to law school.

“Winning Jeopardy! has been huge for that,” he said, “because it means I won’t have to get into mountains of debt.”

Besides the coveted trophy and $100,000 in winnings, Deutsch’s status as this season’s college champion earns him a spot on the show’s Tournament of Champions in November, when the show brings back the year’s best players for top bragging rights and up to $250,000 in winnings.

Moncell Durden talks about the roots of the dance form in a five-part series.

Occupational therapist musters her strength and agility to take on tire swings and a 14-foot wall on NBC series.

Trojans Tom Studdert and Matt Schaefer attempt to dodge an array of obstacles on the ABC game show Wipeout.