Freeman Hrabowski III transformed a small commuter school of 14,000 students into a national model of achievement and college success for all students, including groups most often underrepresented in science, technology, engineering and math (STEM).

The president of the University of Maryland-Baltimore County (UMBC) for nearly 25 years delivered the 38th Annual Pullias Lecture, a series hosted by the USC Rossier School of Education’s Pullias Center for Higher Education and the oldest endowed lecture series on higher education in the country.

To highlight the point on underrepresented students, only 67 undergraduate degrees were awarded nationally to African-Americans in 1998–99 and 21 of those went to UMBC students.

Despite all of his accolades — he was named one of “America’s Best Leaders” by U.S. News & World Report in 2008; listed among “America’s 10 Best College Presidents” by Time in 2009; and appointed to President Barack Obama’s Advisory Commission on Educational Excellence for African-Americans in 2012 — Hrabowski remains a math teacher at heart.

In delivering the lecture at Town and Gown, Hrabowski called out the graduate students in the room and peppered them with questions about numbers.

“What percentage of white Americans in the early 1960s had college degrees?,” he asked. “What do you think?”

After a few tentative guesses from the audience, he revealed the answer. Only 11 percent. And African-Americans? About 2 percent.

Any perception of progress, modest as it has been in the past 50 years, evaporates with his final statistic: “In the 1960s, under 10 percent of Americans in the bottom quartile economically had graduated from college, and today that number is still the same.”

Hrabowski wove his discussion of college success into his personal narrative. He grew up in Birmingham, Ala., and recalled a day in 1963 when he distracted himself with math problems in the back of church one evening, pausing from his obsession only when the minister called for a Children’s Crusade. The speaker was Martin Luther King Jr.

“Each of us is the product of our childhood experiences,” Hrabowski said in the lecture, again directing his words to the students in the audience. “Whether we know it or not, things that happened to us when we were 12 years old still have an impact on who we are today.”

Hrabowski took part in that 1963 march and then spent five nights in jail. He went on to graduate from high school at age 15 and Hampton Institute at 19 before earning a master’s degree in math and a PhD in education at the University of Illinois-Urbana Champaign. He has written several books, including Holding Fast to Dreams: Empowering Youth From the Civil Rights Crusade to STEM (Beacon Press, 2015).

“We rarely take the time to struggle with the challenges that we face in such a way that we understand not only that there are no easy solutions, but we never really get to a solution, whatever the challenge is — whether it’s about inclusiveness … poverty … income inequality or academic achievement,” he said.

“There must be an ongoing conversation — an ongoing struggling with these issues — to continue to chip away at them.”

Hrabowski has been chipping away at another powerful national statistic: “Only 20 percent of black and Hispanics who begin with a major in science or engineering graduate in that area.”

In 1988, shorty after arriving at UMBC as vice provost, he co-founded the Meyerhoff Scholars Program with philanthropist Robert Meyerhoff. The program serves high-achieving students committed to pursuing advanced degrees and research careers in science and engineering, thereby advancing underrepresented minorities in these fields. It has produced 800 alumni across the nation and currently serves about 300 students pursuing graduate and professional degrees in STEM fields. 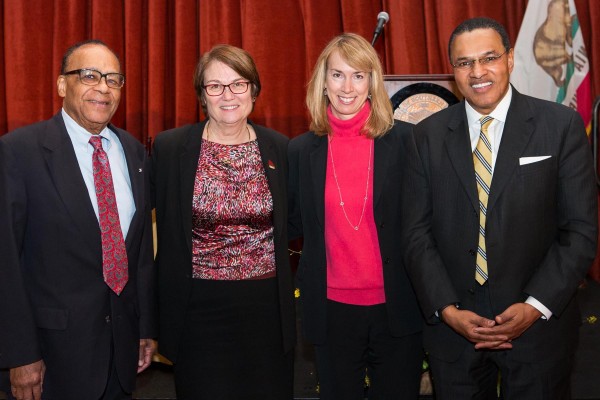 Hrabowski is proud of the fact that other institutions have adopted the model, including Morehouse College, Penn State and the University of North Carolina.

Addressing the needs of first-generation students is a key to success.

“Our attitude has been that students must come in and adjust to this environment,” he said of universities in general, “and we rarely talk about the adjustments we as a higher education community need to make to understand their perspectives to give them a sense of self and respect.”

He criticizes the “weeding out” mindset that has long been tolerated and mistaken as a consequence of high quality.

Inaugural ‘Path to Success’ event brings students together with key faculty, staff and alumni to share experiences and advice.