Alzheimer’s disease not only takes a profound physical toll but has a huge emotional and financial impact on society as well, two experts on the disease told a USC crowd.

“Today in the United States, we spend $250 to $260 billion dollars a year to take care of Alzheimer’s patients. By 2050, we will spend over $1 trillion a year,” USC neuroscientist Arthur Toga told the audience at Something’s Not Right With Alice: Understanding Alzheimer’s, a Visions & Voices event Feb. 4 at Bovard Auditorium.

Toga, director of the USC Mark and Mary Stevens Neuroimaging and Informatics Institute, was joined by Lisa Genova, author of best-selling novel Still Alice. Moderated by NPR correspondent Ina Jaffe, the talk between Genova and Toga touched on the many impacts of the disease.

If we don’t solve this problem, it will not only bankrupt our families financially and emotionally, it will bankrupt this country.

“This is the grandest challenge we have in neuroscience. If we don’t solve this problem, it will not only bankrupt our families financially and emotionally, it will bankrupt this country.”

Genova, a Harvard-trained neuroscientist who was inspired to write Still Alice – her first novel – after her grandmother was diagnosed with Alzheimer’s, sees her work as a vehicle to spread understanding and galvanize action toward a once rarely discussed condition.

I always start with the science, but my job is to write a compelling, human story that brings compassionate understanding.

“I always start with the science, but my job is to write a compelling, human story that brings compassionate understanding, that gets you in the heart, that creates an awareness that has empathy, which is a motivation for action,” she said about her fiction, which is dedicated to exploring the human dimension of neurological diseases and disorders.

While there is still no cure for Alzheimer’s, both Toga and Genova say the situation is moving in a positive direction. For instance, the public conversation created by increased awareness of the disease – helped in part through the successful film adaptation of Still Alice, for which Julianne Moore won an Oscar in 2015 as an early-onset Alzheimer’s sufferer – is leading to greater investments into a cure.

“The progression of knowledge of Alzheimer’s disease has been impressive in the last 25 years and continues to grow in a very accelerated way, not only in terms of the technology, which is able to identify what’s happening, but the number of trials that are happening is unprecedented,” Toga said. “Money that is being spent by Big Pharma like never before, investments from the National Institutes of Health (NIH), which just two months ago pledged $350 million more toward Alzheimer’s disease.

“There is great hope, great excitement and great enthusiasm among scientists to push forward with this disease.” 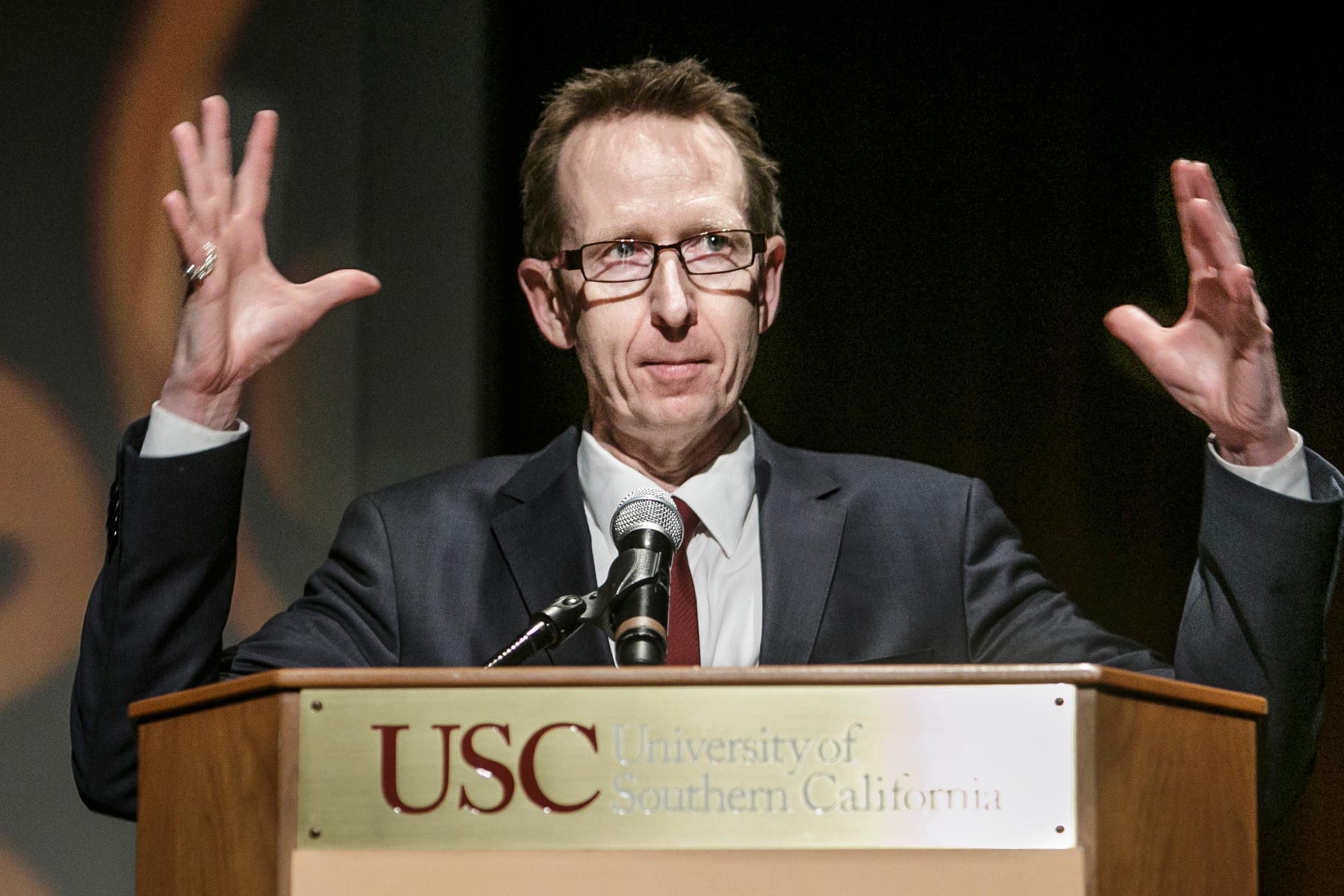 USC Provost Michael Quick welcomes the crowd to Something’s Not Right With Alice: Understanding Alzheimer’s. Quick described the disease as one of the “wicked problems” of our time. (USC Photo/David Sprague)

The $3 million study will unite researchers and data from 20 countries to answer some of the most pressing questions about Parkinson’s disease.

Fine particle pollution may be one reason why Black women have double the risk of developing Alzheimer’s than white women, new research from the Keck School of Medicine of USC suggests.