Art is meant to be felt and experienced, a visceral stimulation of the senses that generates personal reflection. But there’s also a lot that can be learned about leadership from the dynamics of how art comes together.

The Executive Master of Leadership program at the USC Price School of Public Policy recently explored the creative side of leadership with a two-and-a half-day examination of art. The first session focused on lessons to be drawn from musical performances.

“There’s a lot of work around the world these days putting arts and leadership together, trying to learn leadership from music, theater, painting and dance,” said Professor Robert Denhardt, director of leadership programs at USC Price. “We thought music would be an interesting topic for our students, particularly because we were able to bring together the juxtaposition of two different kinds of music.” 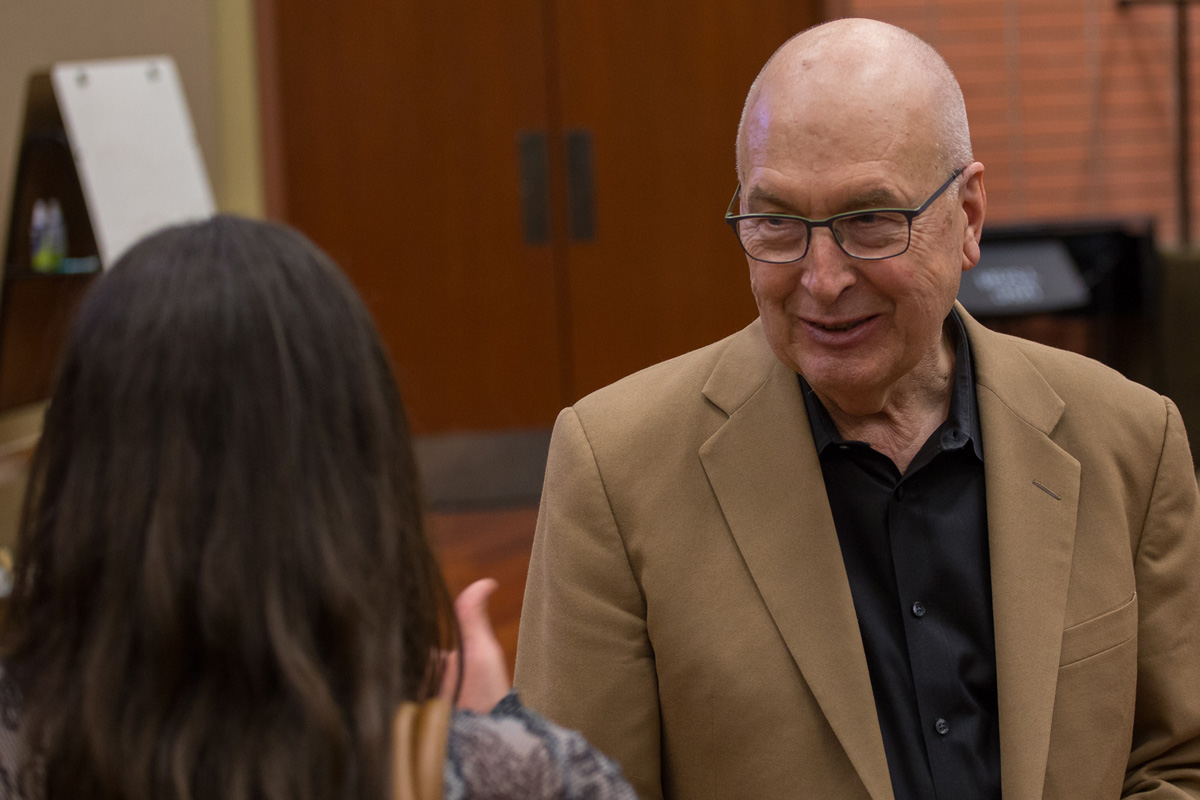 USC Thornton School of Music Professor Ron McCurdy, who plays the trumpet, led a jazz trio with Ivan Edwards on drums and Brandon Cordoba on piano. Benjamin Mitchell, founder and president of the Kaleidoscope Chamber Orchestra, played the clarinet with Brendan White on piano and Coleman Itzkoff on cello. Denhardt and John Burgess of Jazz International led a discussion with the musicians interspersed with musical demonstrations.

Following a jazz performance, McCurdy noted that if they did the song five times in a row, it would be different every time. The musicians follow each other’s cues, even when one changes the direction of the tune.

Even though I may be the leader, once we start we’re all equals.

“Even though I may be the leader, once we start we’re all equals,” McCurdy said. “I have no more say than anyone else in the group. Jazz music is the ultimate example of democracy. If one person decides I’m going to do my own way today, it’s not going to work.”

“I thought there was a direct correlation with the improvisation, flexibility and go-with-the-flow nature required in playing music and leadership,” said EML student Cliff Humphris, a lieutenant for the Los Angeles Police Department. “In law enforcement, oftentimes there is no script in how to deal with a particular incident. It’s about using your experience but being adaptable to the situation.”

Orchestra music is much more structured than jazz. It’s a style based on practice and repetition, with compositions providing the blueprint. However, Mitchell said there is room for interpretation the same way a poet may use different inflections in reciting a poem.

“There’s a lot of work that can be figured out and practiced in your head, and sometimes that’s a better way to work,” Mitchell said. “If you’re just doing it with your instrument, you can wear yourself out physically and practice a mistake. It’s not practice makes perfect, it’s practice makes permanence. So if you’re practicing something poorly, that’s what is going to be more permanent.”

Itzkoff explained how Kaleidoscope functions without a conductor. Each section has a principal player who will take suggestions from others in the orchestra and put them on the table for the principals as a whole to decide. 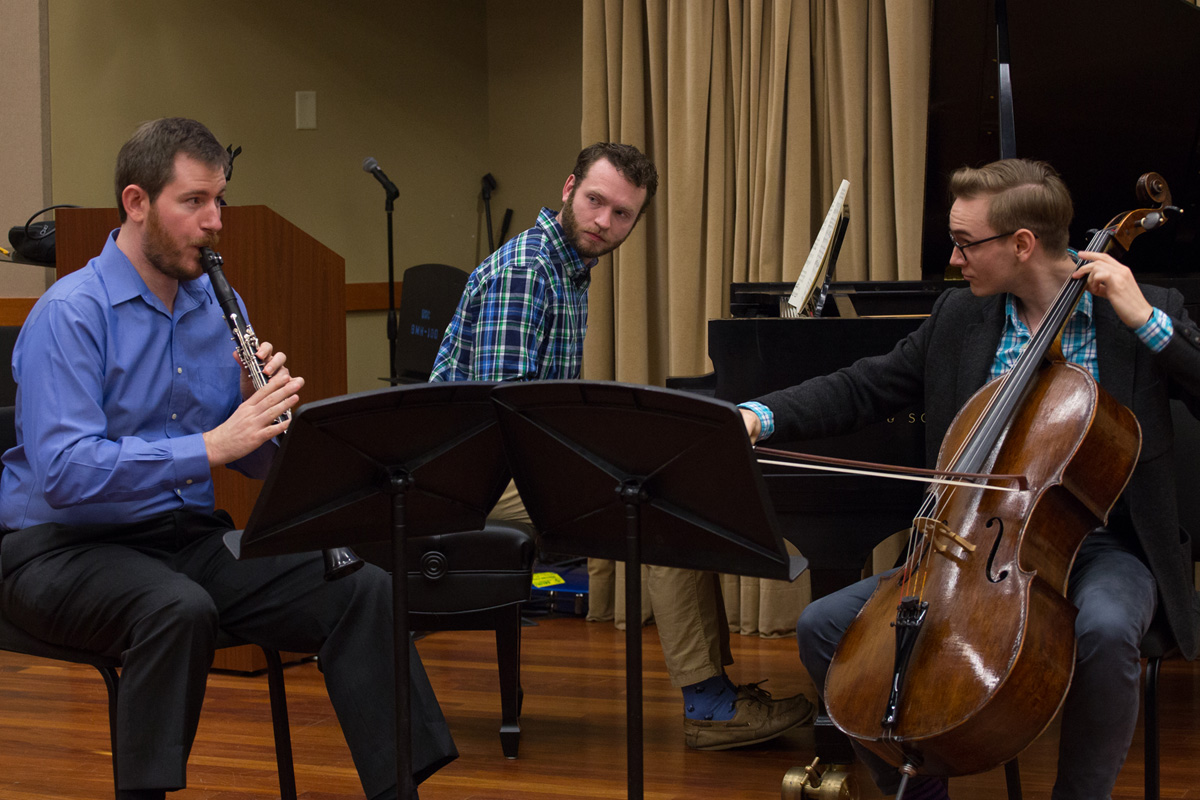 Benjamin Mitchell, left, of the Kaleidoscope Chamber Orchestra with Ivan Edwards on drums and Brandon Cordoba on piano (Photo/David Giannamore)

“With a conductor, you have a dictator up there who says this is how we’re going to do it, no questions asked,” Itzkoff said. “There’s something really great about that. You get a lot done, and it saves a lot of time. But it’s not as engaging between all of the people. …With Kaleidoscope, we’re all engaged. It’s a 50-person organ, and you can sense the energy and feel the collaborative nature.”

The event ended with a collaboration among the disparate styles of music as the trios played together, at first tentatively but ultimately finding a flow because they all speak the universal language of music.

“With the EML program, the fact that we came here to hear a recital and listen to music as a portion of leadership is just huge,” said Carolina Marquez, a guest relations coordinator for the Office of the President at USC. “I’m not a musical or artsy person, and yet I found it connected with me on so many levels.”

The many forms of creativity

Over the weekend program, EML students also heard presentations from David Bridel, interim dean for the USC School of Dramatic Arts, on the changing emphasis of directing actors; USC Price Professor Janet Denhardt on creativity and design thinking; a poetry session with Gloria Burgess; and they visited the Grammy Museum for a tour and discussion with Deputy Executive Director Rita George.

Just imitating other leaders is not going to make you a better leader.

Key takeaways from the program included the importance of listening and supporting others in a group as leadership shifts from one person to another, how improvisation is a needed skill in leadership and the way two groups with dramatically different perspectives can come together based on trust and mutual respect.

“What we really want to process is, how do we take this somewhat abstract material and boil it down into practical lessons for leadership,” Denhardt said. “For example, the lesson about finding your voice musically certainly applies to leaders finding their voice. You don’t want to be Steve Jobs or Margaret Thatcher, you want to be yourself. Just imitating other leaders is not going to make you a better leader.”

Officials discuss the government’s challenges to fend off cyberattacks and terrorism.

Five business leaders and philanthropists elected to USC Board of Trustees

Abraham Lowenthal interviews 13 rulers in nine countries for his new book offering insights into how countries shift from authoritarian rule to democratic governance.

Can leadership be learned from the arts?