Guillotines, Mary Shelley and the likelihood of resurrecting David Bowie were hot topics on the Health Sciences Campus as award-winning author John Corey Whaley discussed his recent novel Noggin, a finalist for the National Book Award.

More than 50 people attended the Jan. 25 Visions and Voices event at Aresty Auditorium on the USC Health Sciences Campus. The discussion, titled “What We Can Learn From a Severed Head,” was part of USC’s arts and humanities initiative and co-sponsored by the Keck School of Medicine of USC’s Program in Medical Humanities, Arts and Ethics; the USC Pacific Center for Health Policy and Ethics; and the USC Levan Institute for Humanities and Ethics. 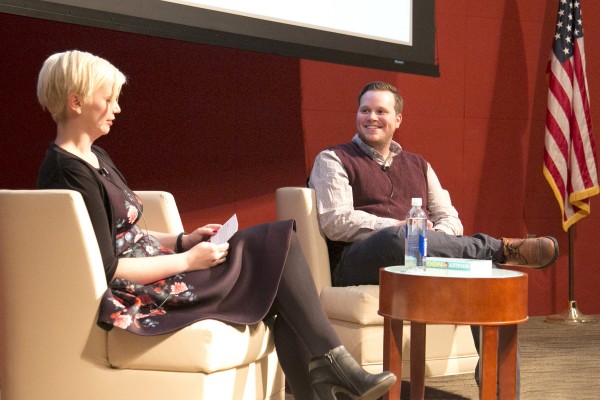 Whaley read an excerpt from the novel and then spoke about his inspiration for the book during a conversation with Lynn Kysh, a clinical and research librarian at the USC Norris Medical Library.

“I wanted to write a novel like (Kurt Vonnegut’s) Slaughterhouse-Five, a book that makes you laugh so hard you’re crying on one page, and then the next you’re actually crying,” he said.

Noggin tells the story of a 16-year-old terminal cancer patient who volunteers for a cryogenics experiment, where his head is removed from his body and frozen, then reattached to a donor’s body five years later. While Whaley said he did some research into current cryogenics experimentation to write the novel — and hopes such a procedure can someday bring back the recently deceased musician David Bowie — he did not intend to explore the medical aspect of the procedure.

I’m not a scientist and this book is not about science. It’s about humanity.

“I’m not a scientist and this book is not about science,” he said. “It’s about humanity. I wanted to write about what it’s like to be out of sync with people you love.”

The novel also indirectly addresses the ethics of such a procedure, as Whaley said he wanted the story to focus on personal repercussions of the experiment, relating it to Mary Shelley’s classic novel Frankenstein; or The Modern Prometheus.

“Noggin is very closely related to Frankenstein,” he said. “Will the main character of this book ever exist the way that existence was intended to feel? Certainly for Frankenstein’s monster, that’s the struggle. What he learns is that he will always be a freak and Travis [Noggin’s main character] can be seen as a cautionary tale, too.”

USC’s popular arts and humanities initiative lifts the curtain on another year with an array of stellar performers.

The voice of the Gilded Age: Why we can’t get enough of Henry James

The works of the acclaimed 19th-century writer — considered one of the greatest novelists ever — have become staples in TV and movies. What explains their continuing appeal?

Of severed heads and cryogenics: Noggin author discusses his work