Thirteen of the roughly two dozen core members are on their way to Texas A&M University to compete among 120 groups, hoping their design will receive the blessing to become a reality. 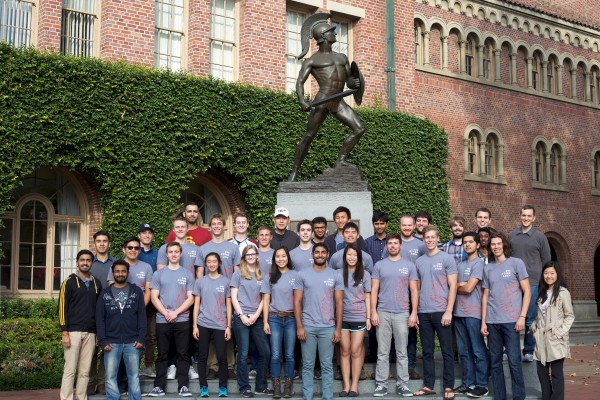 Hyperloop, the brainchild of SpaceX and Tesla Motors co-founder Elon Musk, is a proposed system of ultra high-speed travel — up to 750 mph — that would blast transport pods through enclosed tubes. Musk announced his idea in 2013, and two years later launched an effort to crowdsource universities for the ultimate design for Hyperloop pods through a competition.

The group’s design – hammered out in classrooms and workspaces throughout campus in between classes and homework – relies only on relatively inexpensive and well-proven technology, which Declue hopes will give the team an edge.

At the core of the USC team’s design is the use of a type of air bearings to levitate the pod. It’s one of three possible key design choices; the others are a magnetic levitation system and a wheeled system.

While maglev seems to be a popular choice, air bearings are cheaper – and were actually incorporated in the original concept that Musk unveiled in 2013.

Maglev, currently in use on high-speed trains in Shanghai, uses electromagnetic repulsion to create lift. Air bearings, more common in construction, would allow pods to hover on a pad of pressurized air. And “compliant” air bearings use a flexible diaphragm that would compensate for any imperfections in the surface of the Hyperloop tube itself – intended to make a more forgiving system.

The energy and invention in the furiously hard work of the team has been inspiring.

“The energy and invention in the furiously hard work of the team has been inspiring,” said Geoff Spedding, professor of aerospace and mechanical engineering at USC Viterbi and faculty adviser to the team.

“It was a great idea to draw from a global talent pool this way, and we all hope to learn from the forthcoming design weekend.”

One of the biggest considerations for the team was creating a system that would be able to move heavy loads, Declue said. The numbers are still being crunched, but it appears that his team’s design would be able to carry more than 1,000 pounds in people and cargo.

“If you can’t move things and move them fast, then you really just have an expensive toy,” Declue said.

The team hopes to catch the eye of one of the private sponsors who will be attending the event, potentially offering to cover the construction costs of the pod.

If they’re among the few selected to go on to the next round, the students will have the opportunity to build their proposed pod and test it at the Hyperloop Test Track under construction next to SpaceX’s headquarters in Hawthorne.

Two new programs will give students a mix of communications and technological skills, finding new ways to deliver news.

Who wants the sexiest job of the 21st century?

USC project highlights the benefits and limitations of transit projects.

At 100, ‘Mr. Freeway’ looks back at his concrete creations

A USC engineering alum built the highways that ushered in a new era across America.