When he was only 5 years old, Robert Garcia immigrated to the United States with his extended family to escape the atrocities of the Shining Path, a domestic terrorist group in his native Peru.

It was not an easy transition, Garcia said during an interview before addressing the USC Latino Student Empowerment Conference as closing keynote speaker. The conference — hosted by El Centro Chicano, a USC cultural center for Latino students — was Jan. 23 at the Ronald Tutor Campus Center.

Garcia’s family lived in cramped quarters and, eventually, his father left. His mother and aunt worked several jobs and cleaned houses on the weekends while his grandmother helped care for the children.

Garcia learned English and he excelled as a student. In high school, he said, no one encouraged him to attend college despite his good grades and the fact that he was taking AP courses.

He went anyway, and blossomed. He became a U.S. citizen, was elected student body president at California State University, Long Beach, and came out as a gay man. He graduated from with a bachelor’s degree in communication studies.

There are so many immigrants that just want the same chance that I got.

“There are so many immigrants that just want the same chance that I got,”  Garcia during. “Immigrants are here because they just want a shot at the American Dream.”

At 38, Garcia has a ready smile for everyone. If not for his crisp, navy blue jacket, light blue dress shirt and polished demeanor, he could almost pass for a student himself.

In 2014 with 52 percent of the vote, Garcia became the youngest mayor in Long Beach history — as well as its first openly gay mayor, first Latino mayor and first mayor fluent in Spanish and English.

He strongly touts education and asserts that a college degree is yesterday’s high school diploma. It’s highly unlikely one can succeed in today’s world without higher education, he said, calling it “the best bang for your buck.”

Garcia spoke of how he became interested in politics. He was elected to the Long Beach City Council in 2009, and selected by his council peers as vice mayor in 2012. When the mayor’s job opened up, he decided to run. 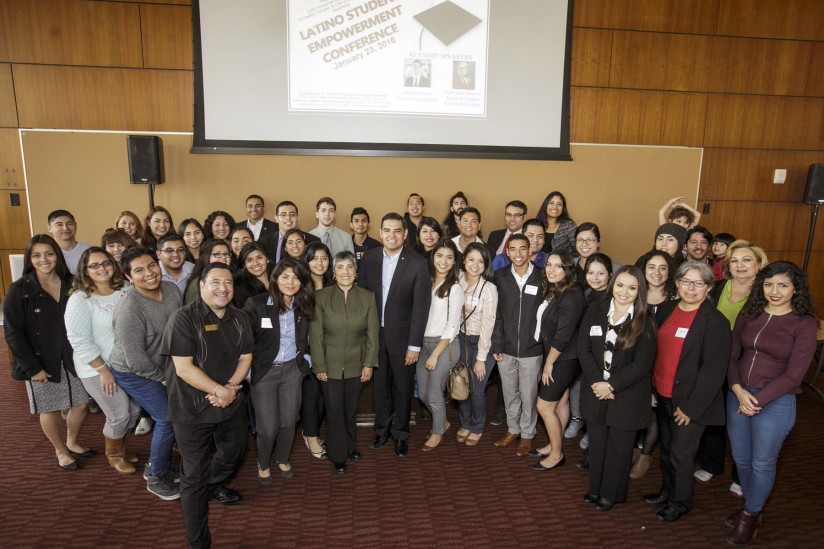 On the campaign trail, he would often hear how he was too young for the office and, to some, an unlikely prospect due to his ethnicity.

“I was not the anointed candidate,” Garcia told crowd. “I was my own candidate of the emerging Long Beach.”

There are perks to the job, like hanging out at the White House with President Barack Obama, but gone are the days of anonymity. He said he can no longer have a quiet dinner in the city with his partner of eight years without being approached by constituents.

He gave students three pieces of advice that came from his grandmother.
First, never forget your neighborhood or community. Second, be kind.

“The single biggest thing for me is being a nice person,” he said.

The third bit of advice was for immigrants and Latinos to band together with other marginalized groups who have a shared experience of struggle.

Garcia’s abuelita, he said, “always talked about the African-American community and their struggle,” and that Latinos can’t just be in it for themselves. “We need to be in it for anyone who’s in that struggle.”

For many of the young students at the conference, the elected leader’s words rang true.

Braulio Hoyos, 21, and a junior in Policy, Planning and Development and GeoDesign, also hails from Peru and identifies as queer. He was struck by the mayor’s advice.

As a minority, I can connect with the struggles of other minority groups but we seldom work together.

“As a minority, I can connect with the struggles of other minority groups but we seldom work together,” Hoyos said. “It would be more powerful if we worked together and looked out for one another.”

When someone in the audience asked about gentrification in Long Beach, Garcia tactfully turned it around and tackled another of his pet issues: voting.

“The bigger concern is we don’t use our collective power at the voting booth,” he said. “I’m fortunate that, in my election, we got Latinos to turn out.”

But he said most Latinos stay at home. And for them, he had sharp words, saying their apathy is twice as bad because it’s a wasted opportunity.

“You’re not just voting for yourself,” he said of those who do not exercise their power. “You’re voting for your undocumented brothers and sisters. We are the worst of any demographic. The worst. We just think that things are going to magically change for us.”

After earning her degree later this year, Mexico’s Karla Martinez hopes to motivate others to see their potential.

For Long Beach mayor (and USC alum), being an immigrant shapes the future