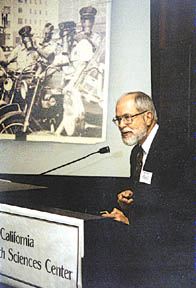 At a conference last year, John Peters, professor of preventive medicine, showed how motorcycle police officers dealt with smog in the 1950s — by wearing gas masks.

COMMON AIR POLLUTANTS appear to have subtle, chronic impacts on children’s lung health, according to early results from the USC-led Children’s Health Study.

The decade-long investigation, considered one of the nation’s most comprehensive studies to date of the long-term effects of air pollution in school-age children, is primarily supported by the California Air Resources Board.

Since 1993, researchers with the Children’s Health Study have monitored levels of major pollutants in a dozen Southern California communities while tracking the respiratory health of more than 3,600 students. The reports cover only the first year of the 10-year study.

In the first reports, USC scientists show that lung function is lower in children who breathe the most polluted air. These effects may leave children more vulnerable to respiratory disease and may result in their having weaker lungs as adults.

Unexpectedly, the scientists also found that boys and girls may respond differently to air pollution, they report in the March issue of the American Journal of Respiratory and Critical Care Medicine.

“The early results of the study show that air pollution has unfavorable effects on children’s health,” said study leader John Peters, professor of preventive medicine at the School of Medicine. “The preliminary results suggest that girls may be at higher risk of suffering ill effects from air pollution than boys,” he added.

IN SOUTHERN CALIFORNIA, where levels of air pollutants commonly exceed state and federal standards for air quality, millions of people breathe in air laden with pollutants each day. For some, it’s clear that inhaling polluted air causes acute health problems – short-lived symptoms such as watery eyes, coughing or wheezing that fade quickly when exposure stops.

Yet, scientists have had a much more difficult time showing whether chronic exposure to air pollutants causes more insidious and long-term health effects.

“At commonly encountered levels of air pollution, a gas like ozone creates very clear, acute effects,” Peters said. “Detecting any chronic effects – permanent damage to the lungs – due to these same pollutants has been much harder to do.”

Notably, very few studies have focused on the group thought to be the most vulnerable to air pollution – children.

In the present study, researchers focused on four major air pollutants: ozone, nitrogen dioxide, microscopic particles known as particulate matter and acid vapors. All are produced directly or indirectly by the burning of fossil fuels, as well as through industrial and other emissions.

Ozone and acid vapor are created when precursor gases (such as nitrogen dioxide and volatile hydrocarbons) react with other airborne chemicals; these reactions are speeded up in the presence of sunlight.

“L.A. has a perfect formula for air pollution: car exhaust, sunshine, a basin that traps air, and plenty of hydrocarbon emissions,” Peters said. “Even so, different communities within Southern California can have very different pollution profiles.”

In the study, the team recruited 1,800 fourth-graders, 900 seventh-graders and 900 10th-graders from 12 Southland communities. Some towns, such as Mira Loma, were chosen because they were known to have relatively high levels of all four pollutants.

Other communities such as Lake Gregory, where ozone levels often reach regional highs, represented an extreme of exposure to just one or more pollutants.

The researchers selected other cities, such as Santa Maria and Lompoc, with low levels of air pollution to serve as controls for the study.

The team asked students or their parents to fill out detailed questionnaires, including information about the child’s history of respiratory illness, such as asthma (diagnosed by a doctor), bronchitis, wheezing and coughing.

The team also tested the children’s lung function. “We measure how much air the children can blow out and how fast they can move air through their lungs, to get an idea of how well the lungs are working,” Peters said.

The study is still underway – Peters and his colleagues plan on following the children until high school graduation.

The present results reflect a cross-sectional analysis on the first year of data. USC researchers analyzed the data to see whether baseline differences in lung function and respiratory disease incidence could be partially explained by where the children live and the different levels of exposure found in each community.

In girls, they also found a clear correlation between decreased lung function and more intense air pollution. The effect was more pronounced in girls who reported spending the most time outdoors.

“For most people, this loss of function would never be noticeable. For those who are sensitive, because they already are prone to asthma or have weak lungs, this could impact their activities,” Peters said.

Following the respiratory health of these students through high school graduation (in a longitudinal study) will show whether changes in students’ lung function and respiratory health correspond to air quality over many years, and will provide a more complete picture of how pollutants affect health.

“There’s a general indication that pollution in Southern California produced subtle, chronic effects in school-age children,” Peters said. “But, there’s still a lot more to learn about which pollutants play the most important role, how important these effects are, how air pollution influences asthma, and why we see a difference in the effects between girls and boys.”

The Children’s Health Study is expected to be completed in 2003. Headquartered at the USC-based Southern California Environmental Health Sciences Center, the project is supported primarily by the California Air Resources Board.