David Bowie, rock’s greatest chameleon, passed away on Jan. 10 from liver cancer. His death, like the many transformations in persona he so skillfully executed during his lifetime, came without warning, shocking fans and close friends who knew nothing of his diagnosis.

But Bowie died as he had lived.

Just as he had scrupulously curated his shifting image throughout a long career spanning half a century, so he astutely choreographed his death. His critically acclaimed final album, Blackstar, released on the star’s 69th birthday — just two days before his death — contained many lyrical hints that his end was nigh, and yet these were only understood after he was gone.

The rock icon’s last photograph shows Bowie as sharply dressed as ever in an impeccably tailored dark, narrow suit, his hair hidden by a fedora. His face is lit by a joyous smile that, before we knew of his battle against cancer, signaled vitality, but can now be read as courageous defiance in the face of the inevitable.

A visionary and true Renaissance man (in addition to his remarkable musical career, he was also an accomplished actor, artist and writer), Bowie’s far-reaching appeal transcended generations, continents and cultures.

“Bowie was the mirror we all wanted to look into and see ourselves,” said David St. John, professor of English and comparative literature and chair of English at the USC Dornsife College of Letters, Arts and Sciences. “I only had a few friends who knew Bowie, and at different times in his long career, yet every one of them described him as not only brilliant, but one of the more curious and empathetic people they’d ever encountered.

“His shifting of performative identities in music reflected what many people were attempting in their actual lives.”

Bowie’s arrival on the music scene marked a sea change in the performance style of the time.

“Almost singlehandedly he broadened what was possible within the genre of rock music,” said Alice Echols, Barbra Streisand Professor of Contemporary Gender Studies and professor of history and gender studies and director of the Gender Studies Program at USC Dornsife. Echols argues that Bowie pushed back powerfully against the naturalism, self-seriousness and earnestness that characterized ’60s rock.

“At a time when audiences and critics expected that there should be as little distance as possible between the musician and the person, as with, say, Bruce Springsteen, Bowie delighted in deploying and discarding artificial personas,” she said.

Bowie was truly rock’s greatest chameleon, metamorphosing into a dizzyingly long list of characters, for a while each one more creatively outrageous than the last in showcasing the performer’s innate and idiosyncratic sense of style. Among the most famous were the doomed bisexual rock envoy from space, Ziggy Stardust; Aladdin Sane (the name is a play on “a lad insane”); Bowie’s plastic soul persona, the Thin White Duke; Thomas Jerome Newton, the alienated alien from Nicholas Roeg’s 1976 sci-fi cult classic The Man Who Fell to Earth; the lonely, lost Pierrot of the Ashes to Ashes video and the anti-hero Halloween Jack from Diamond Dogs.

Bowie’s artistry in successfully transitioning from one unforgettable character to the next is an essential element of his appeal. However, Echols points out that although we won’t read much about this in the immediate aftermath of his passing, not everyone at the time approved of Bowie’s theatricality.

There would be no Madonna, Grace Jones or Lady Gaga without him.

“One critic complained that he was a dangerous ‘charlatan … undermining an honest art form with a series of tacky costume changes,’” she said. “But whatever one might think of his theatricality, one thing’s for sure, there would be no Madonna, Grace Jones or Lady Gaga without him. In fact, Bowie was among the first performance artists in popular music. And he was perhaps the first pop musician to grasp the importance of film and video to music. He was also creatively restless, which, is a large part of his appeal.”

Bowie’s own sexual ambiguity was reflected in his most celebrated alter ego: the flamboyant and androgynous Ziggy Stardust.

Bowie was hardly the first rock star to push the boundaries of gender and sexuality, argues Echols, citing American recording star Little Richard, whose exuberant stage antics, screeching falsetto and sexual ambiguity drew wild responses from 1950s audiences. But Bowie, Echols points out, was the first to claim his queerness unabashedly and unapologetically. As such, Bowie — always a trailblazer — anticipated today’s discussions around a transgender spectrum by 40 years. 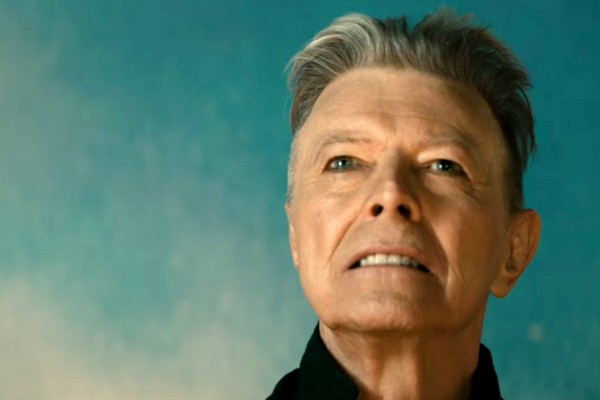 A video still from David Bowie’s 28th and final album, Blackstar, which has been described as a “parting gift” to his fans (Photo/Courtesy of Bowie’s ISO Records)

“He was one of the very first to introduce the idea of gender fluidity as being an essential element of the self,” St. John said.

Bowie’s fearlessness in the early ’70s may have been a publicity stunt, Echols allows. However, she argues, that is unimportant.

“Whether it was or wasn’t doesn’t really matter because Bowie’s willingness to claim he was bisexual was a game changer that paved the way for greater sexual openness,” she said.

Commentators noted that much of Bowie’s appeal came from his self-representation as an outsider, an alien.

“All art and myth pulses with the perspective of the outsider, the person or alien who can see through the constructions of culture and history into the heart of what holds some essential and lasting value,” St. John said. “The superb twist of Bowie as an alien is that he both champions the value of being ‘other’ as well as making us see into the heart of what is most powerfully human.”

Bowie made it clear that one didn’t need permission to be outrageous and courageous about flouting the conventions of sexuality. Crucially and defiantly, he also refused to be the same person or the same artist — over and over again.

He was from the first a classic trickster figure.

“No one was more of a self-conscious chameleon than Bowie,” St. John said. “We admire anyone who can change skins with that kind of elegance and drama. Yet, sometimes, I think we forget the kind of equilibrium and grace a great performer needs to be able to walk that high wire.

“He was from the first a classic trickster figure, shape shifting in both his image and his music. Every artist dreams of being a moving target, of staying one step [or many steps] ahead of one’s imitators as well as the culture at large — but David Bowie was always leaps and bounds in front of the pack.”

USC Thornton students sing along to a lively performance by the Brasil ’66 band.

Visions & Voices performance demonstrates that just about anything can become a musical instrument.

Grammy Camp immerses students in the world of professional musicians

The life and death of David Bowie, rock’s crafty chameleon