UNICEF has awarded USC President C. L. Max Nikias with the Spirit of Compassion Award for his work shaping the minds of a generation of students to be philanthropic, globally minded and informed of the issues that are affecting the world’s children. 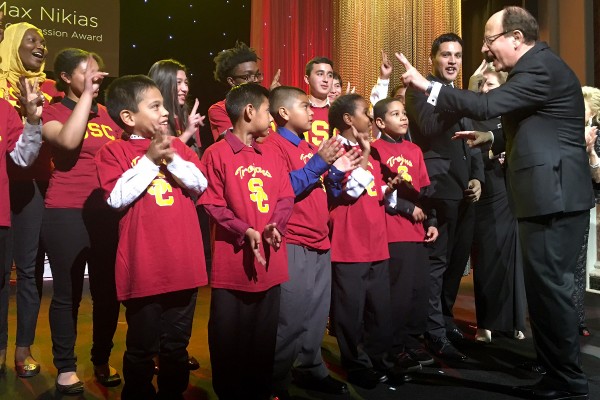 Students from the USC Neighborhood Academic Initiative join in the festivities at the UNICEF Ball. (Photo/USC News staff)

Nikias received the award at a star-studded Jan. 12 gala at the Beverly Wilshire hotel. The award was presented to him by Marvin Arias, a 2010 alumnus of USC who grew up in Los Angeles and graduated from the USC Neighborhood Academic Initiative (NAI), an enrichment program that prepares low-income students from areas around USC to pursue higher education. UNICEF honored Nikias in part for expanding USC’s youth outreach and education programs such as NAI.

“I am humbled to receive this award from the U.S. Fund for UNICEF and to support an organization which works tirelessly to save and protect children around the world,” Nikias said. “I believe education is the greatest equalizer, and our faculty, staff and students all take part in volunteer outreach programs that make a tremendous difference in children’s lives, here at home and around the world. 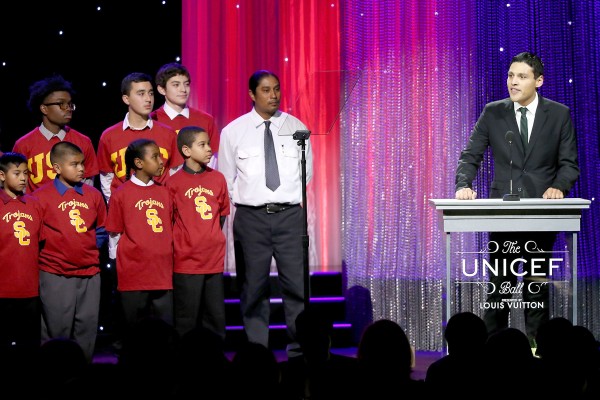 “Locally, our students tutor and mentor local children and our Neighborhood Academic Initiative has allowed students from challenging socioeconomic backgrounds to gain admission into some of the most selective universities in our nation — including USC. I am extremely proud of our achievements in this area, and accept this award on behalf of the entire USC community.”

In presenting the award to Nikias, Arias described how NAI helped him on his way to his career as a film industry executive. “Thanks to the support of Dr. Nikias and his relentlessness in making higher education accessible, there are hundreds of others out there who can now also say that they are on their way,” Arias said. “What Dr. Nikias is doing is life-changing for these kids and their families.”

The governing panel oversees business affairs of the playoff organization, including budgets, policies and operating guidelines.

USC president joins cast and director in discussion of the play’s timeless themes.