You won’t find the name of Willy Marsh ’94 engraved in stone at USC Village, but his fingerprints are all over it. Not a yard of concrete gets poured at the site without his oversight.

The 46-year-old master builder has lived and breathed USC Village since 2011, spending thousands of hours helping to plan and supervise the $700 million construction project, the largest in USC history. During the last year, six buildings rose from the 15-acre site — transforming the expanse to the north of the University Park Campus into what will become a living-learning community for 2,700 USC undergraduates in fall 2017.

USC Village’s final building topped out Dec. 23. There have been no surprises, no miscalculations and no delays. The few mishaps, like sprained ankles and small cuts, were treated onsite. With 600 to 800 laborers working daily and more than 700,000 man-hours clocked, that’s a small miracle.

“I’m sitting back a little more in the chair now because of these critical milestones we’ve achieved,” said Marsh, director of construction for the site.

For a man with so many workers and such a huge project riding on his shoulders, Marsh seems remarkably easy-going. A grin is never far from his mouth. You can tell he’s happy — and that’s a conscious decision, not by chance.

Perhaps it’s because of the way he first arrived at USC more than two decades ago.

Growing up some 15 miles from USC in San Marino, Marsh was an outgoing, athletic kid from a big family. Dad worked in the floor-covering business, but Marsh dreamed of becoming a developer like his uncle, who built one of San Francisco’s iconic Embarcadero towers.

He started working construction in his teens, pulling nails, setting forms and pouring concrete for a building firm. Old-timers on the work crew gave him a hard time. “They saw me as a thin-skinned Pasadena boy,” he said with a laugh. “They beat me up pretty good, dumped concrete in my boots.” But he learned the trade.

He wasn’t admitted to USC, so Marsh attended tiny Menlo College in Silicon Valley. That’s where his life completely changed. He woke up one day his freshman year to find his pillow covered in his own hair. Within six weeks, he went bald. The diagnosis was alopecia, a rare, irreversible autoimmune disorder that causes the body to attack its own hair follicles. 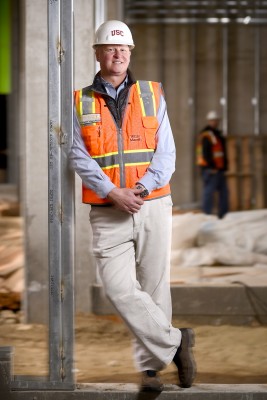 Marsh dreamed of becoming a developer like his uncle. (USC Photo/Gus Ruelas)

“That was a difficult time in my life,” Marsh said. People stared. “I didn’t want to be out in society. I wore a bandana.” When his parents pressured him to start wearing a wig, Marsh realized this decision could shape the rest of his life.

“I decided I’m not going to be intimidated. I’m going to go big.”

Marsh embraced his new appearance and reapplied to USC, where he knew he wouldn’t hide. He was admitted as a sophomore transfer student and graduated with a degree in urban planning and development. Soon afterward he started working at the contracting and planning firm Hathaway Dinwiddie, where he cut his teeth on mega projects like the Getty Museum, Fox Studios, the Omni Hotel and Loyola Marymount’s Conrad Hilton Business Center.

Construction brought him back to USC. His first project at his alma mater came as a consultant for Popovich Hall and Ralph and Goldy Lewis Hall. He also worked on the International Residential College at Parkside.

Asked to name his favorite projects at USC, Marsh is quick to mention the USC Caruso Catholic Center, which he describes as a “jewelry box” with intricacies around every turn. Another favorite: a hybrid cardiac operating room at Keck Medical Center of USC used by surgeon Vaughn Starnes. Marsh had to solve the puzzle of how to tear down walls and build inside a functioning hospital while keeping nearby areas immaculately clean and safe.

But USC Village is so much bigger in scale, he said. He likens it to the Los Angeles entertainment complexes Americana at Brand or L.A. Live.

“The glitteringly obvious picture is 1.2 million square feet, six buildings, 15 acres, 2,700 beds, $700 million,” he said. “You start throwing those numbers out and it seems like so much to handle.” USC Village’s fast-track construction schedule required precise planning and timing.

Happily, on the largest and most scrutinized project of his career, Marsh has the luxury of hiring top talent and the discretion to do things right.

We are at a private institution where we get the cream of the crop — the best contractors, the best subcontractors.

“We are at a private institution where we get the cream of the crop — the best contractors, the best subcontractors,” he said.

He can make decisions like spending more for higher-quality shower enclosures because the original choice proved too flimsy and made for a poor investment for the university.

These days there’s a bounce in Marsh’s stride. With only 20 months remaining until the first students move into their residential colleges, he’s confident that USC Village will be successful. “I’m excited,” he said, “and I’m extremely proud.”

So who cares if his name isn’t carved in the stonework?

“Part of my pride,” Marsh said, his gaze sweeping from McCarthy Honors College toward the as-yet-unnamed Building 9, “is I can show my son and daughters, my wife, my mother and father: These are my trophies. I did this.”

The residential-retail complex will change how Trojans live and learn when it opens in 2017.

USC Village flyover has a couple of surprises in store

What a difference a month makes: You may not recognize the project.

Take a look as USC Village starts to come together

The $650 million project will house residential colleges along with retail and other support space.