Researchers have discovered a new way that taste cells detect sourness, a sensation that is linked to acidity.

Of the five basic tastes, sour remains the most mysterious – to the point that the tongue’s sour receptor still has not been identified, and the ways in which it receives sour stimuli are still the object of intense research. 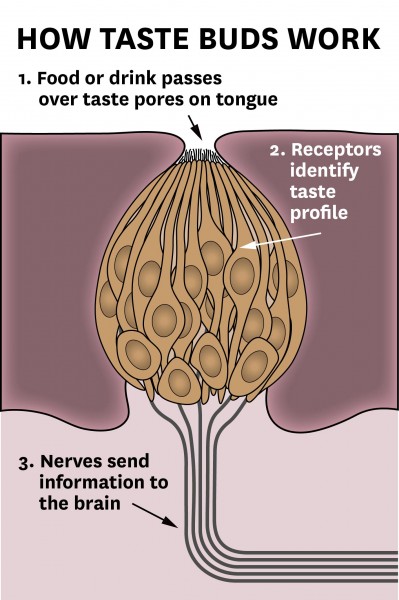 “Before 2006, we didn’t even know definitively which cells detect sour taste,” said Emily Liman, professor of neurobiology at the USC Dornsife College of Letters, Arts and Sciences.

In 2010, Liman identified one of the molecular pathways by which acidic substances trigger the sour taste sensation. Hydrogen ions released by acids directly enter taste cells on your tongue and trigger an electrical signal to the brain.

If that were the only way that sour taste was produced, then the lower the pH, the more sour something should taste. However, some substances – such as vinegar – taste more sour than one would expect just based on pH.

A substance’s pH is just part of the answer – the concentration of weak acids (such as acetic acid found in vinegar) plays a significant role in how sour it tastes, according to a study published Dec. 1 in Proceedings of the National Academy of Sciences by a group of researchers including Liman.

Previous studies showed that the concentration of a weak acid, in addition to its pH, determine its sourness.

By marking sour taste cells with a fluorescent protein, Liman discovered that there’s another way to detect sour tastes. The group identified a potassium channel that makes sour taste cells extremely sensitive to changes in the cell’s intracellular pH.

Making the cell more acidic, too

It’s an interesting window into how our body and mind are connected.

“Taste represents a fairly direct link between sensation and perception, so it’s an interesting window into how our body and mind are connected,” Liman said. “The mechanism that we discovered not only explains why weak acids taste more sour than strong acid, but it may also explain how we can detect relatively low concentrations of protons because it predicts that there would an amplification of the initial signal.”

A copy of the study can be found online.

Why is that so sour? New mechanism for tasting discovered