Fasting and football, research on baldness and HIV, and some impressive construction projects – these and more were Trojan topics in the news in 2015. Here are some of the USC News stories you made among our most popular for the year. 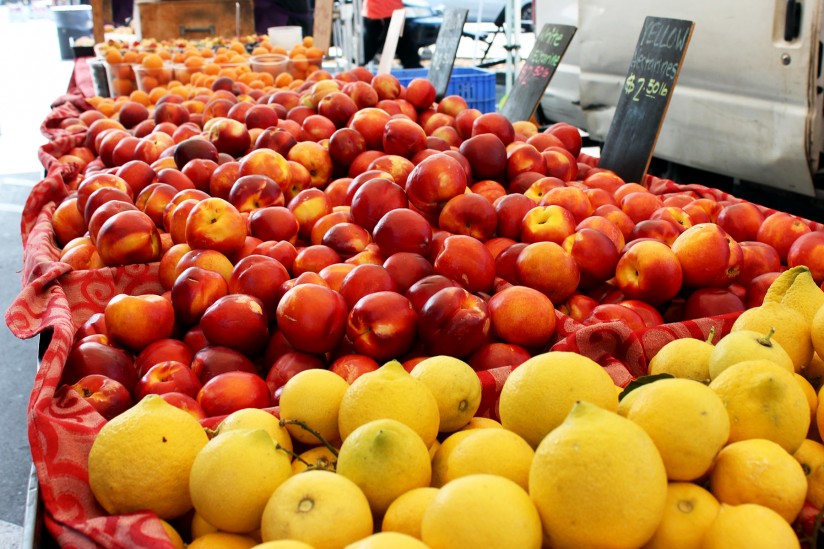 Peaches and lemons are prime for purchase at the Lincoln Heights farmers market. (Photo/Melisa Acoba)

If you want to live longer, lose belly fat and get smarter, a key may be to eat less — a lot less. In their study in mice, USC Davis School of Gerontology scientists showed that going on cycles of a four-day, low-calorie diet that mimics fasting could boost several aspects of health. Other work from the researchers in 2015 also suggested that cyclic fasting combined with low-toxicity chemotherapy can help fight colon, breast and lung cancers. 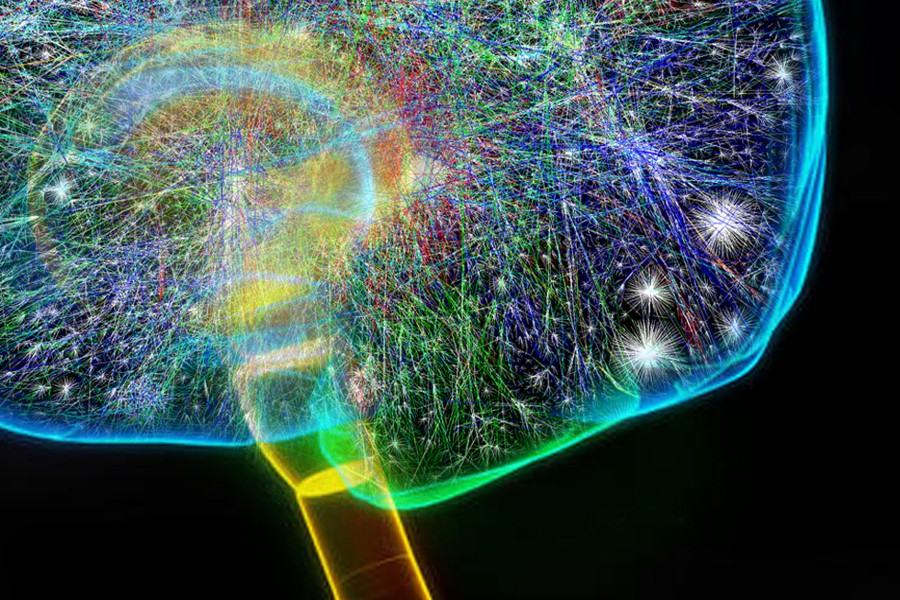 Reseachers sketching out a wiring diagram for rat brains — a field known as “connectomics” — have discovered that its structure is organized like the Internet: They’ve discovered local networks of neurons layered like the shells in a Russian nesting doll. “The cerebral cortex is like a mini-Internet,” said Larry Swanson, professor at the USC Dornsife College of Letters, Arts and Sciences, and corresponding author of a paper on the discovery. “The Internet has countless local area networks that then connect with larger, regional networks and ultimately with the backbone of the Internet. The brain operates in a similar way.” 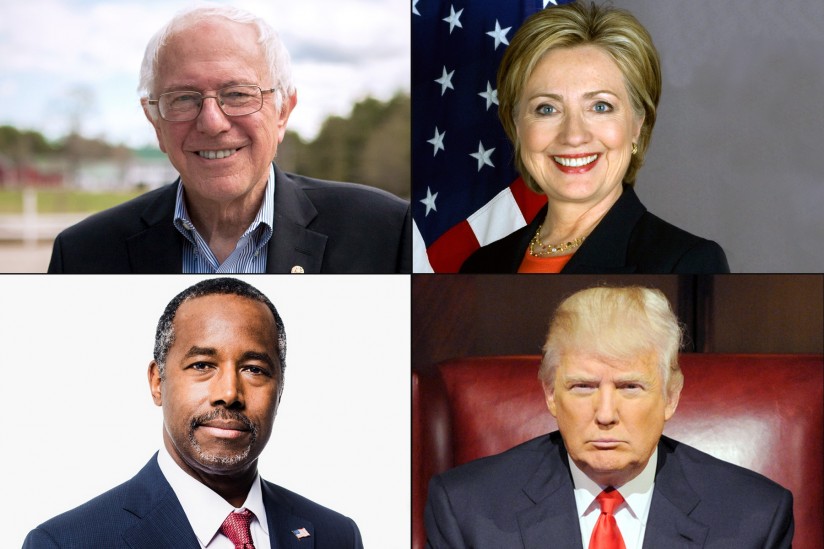 Understanding what Californians are thinking is always important, but it takes center stage when a presidential campaign is underway. The USC Dornsife/Los Angeles Times poll is the largest statewide survey of registered voters. Keep an eye on it as the November election draws nearer. 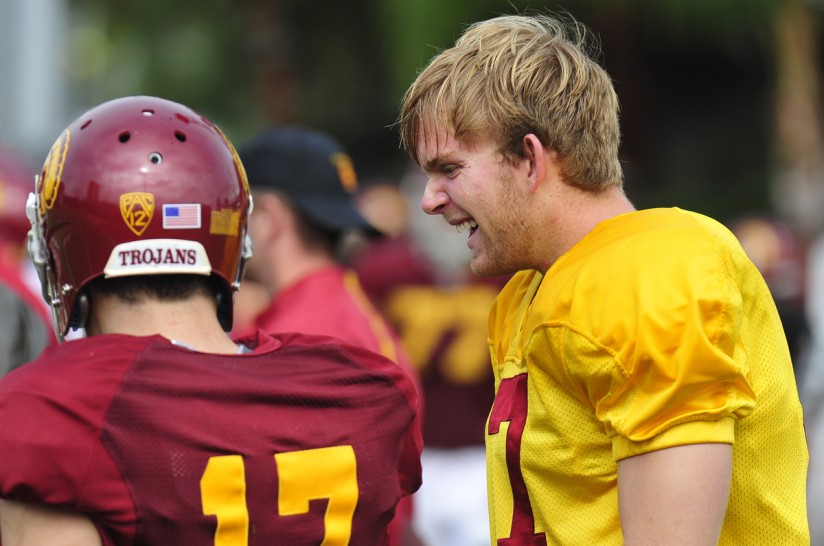 To many Trojan fans, Jake Olson is still the platinum-haired 12-year-old who wanted nothing more than to watch the football team play one last time before cancer rendered him blind. But Jake has grown up. Now a towering 6-foot-4, Olson is an 18-year-old freshman at USC majoring in business &mdash and in yet another dream come true, he’s joined the Trojan football team as a walk-on long snapper. Although Olson is protected from contact during practice, the team hopes to one day get Jake into a game. 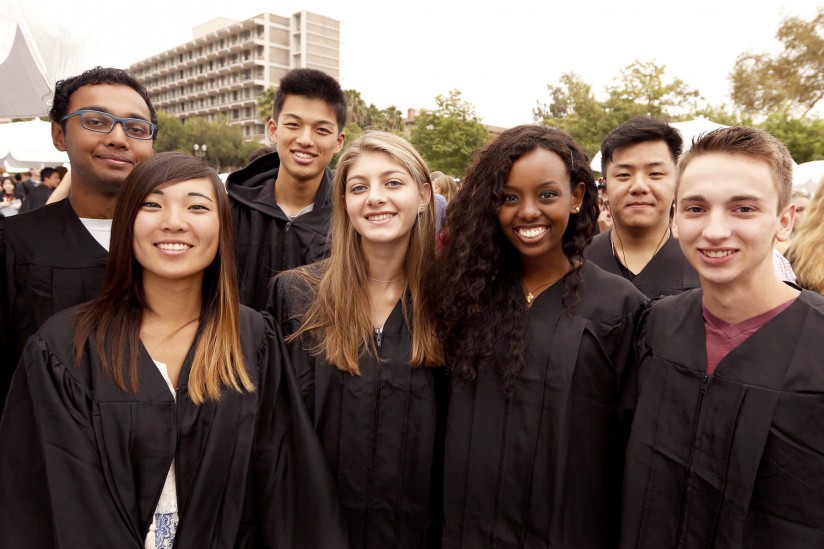 Acceptance letters in March went out to 9,050 high school students vying for a place in the Class of 2019. Those receiving acceptance letters come from all 50 U.S. states and 77 other countries. Twenty-nine percent have perfect GPAs of 4.0. One in eight would be the first in their families to attend college. The admitted pool of students was selected from a highly competitive and diverse group of 51,800 applicants with broad geographic, ethnic and socioeconomic representation. This year’s admission rate of 17.5 percent is the lowest in USC’s history.

Are scientists nearing a cure for baldness? 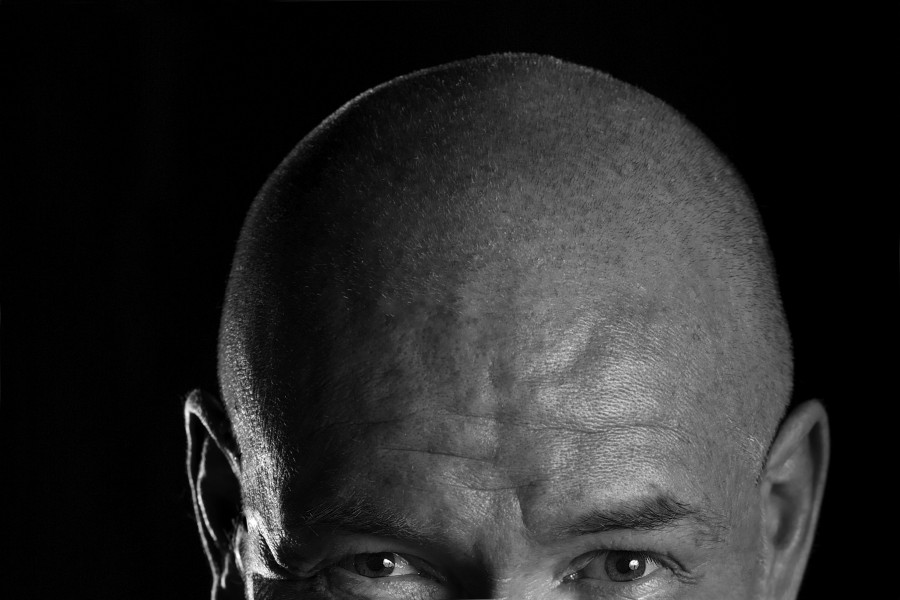 The team’s regenerative process relies on the principle of “quorum sensing.” (Photo/Randi Scott)

Could a treatment for baldness be in the offing? Scientists found that plucking hairs in a specific pattern and density can cause up to six times as much hair to grow back, according to Keck School of Medicine of USC pathology Professor Cheng-Ming Chuong. The injured hair follicles spur the immune system to push surrounding follicles to grow hair.

A century of waiting for new brain imaging is over 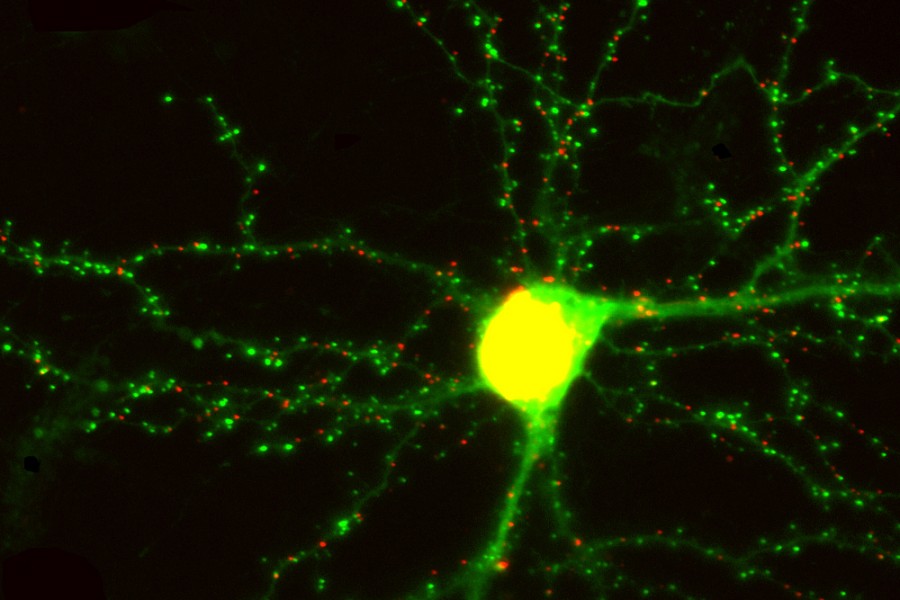 Synapses, the links between neurons that allow them to pass information to one another, are believed to be where memories are stored, yet researchers have little understanding of how they change when memories are made. Scott Fraser, Don Arnold and Carl Kesselman, a multidisciplinary team of distinguished USC researchers, aim to change that. The trio has received a highly competitive five-year, $9.7-million Transformative Research Grant from the National Institutes of Health to perform the first direct study of living synapses in the intact brain, allowing researchers to analyze synaptic changes in zebrafish as a memory is made.

A woman sees religious phenomena that others cannot 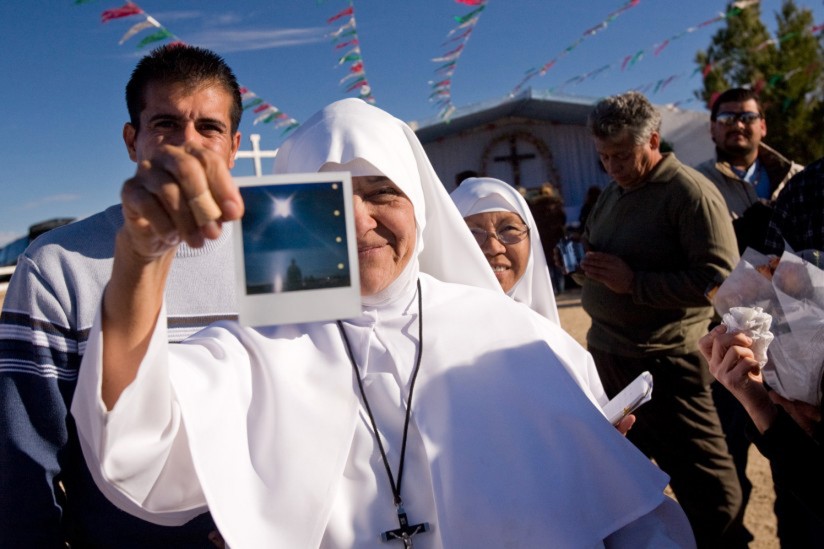 Dressed like a nun, Maria Paula Acuña holds a Polaroid photograph taken by a follower purporting to show proof of the presence of the Virgin Mary. (Photo/Matt Gainer)

On the 13th of every month, at 10:30 a.m., hundreds of ordinary men, women and children join self-proclaimed visionary Maria Paula Acuña at a remote spot in the Mojave to watch her see what they cannot — the Virgin Mary, whom Acuña claims appears in the sky. The culmination of six years of observing this phenomenon and interviewing and photographing those involved, Our Lady of the Rock: Vision and Pilgrimage in the Mojave Desert combines more than 60 evocative photos by Matt Gainer, director of the USC Digital Library, with textual analysis by Lisa Bitel, professor of history and religion at the USC Dornsife College of Letters, Arts and Sciences.

Are we really on the road to a cure for HIV/AIDS? 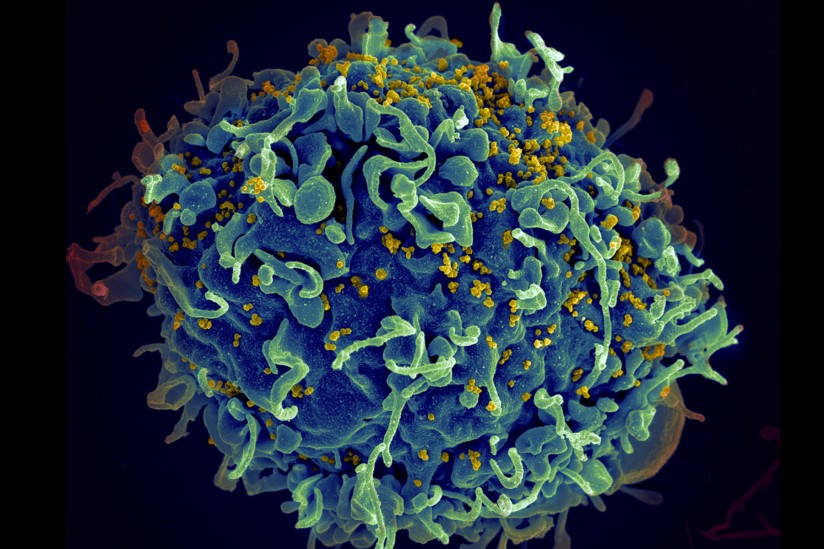 This human T cell (blue) is under attack by HIV (yellow), the virus that causes AIDS. The virus specifically targets T cells, which play a critical role in the body’s immune response against invaders like bacteria and viruses. (Photo/courtesy of National Institute of Allergy and Infectious Diseases, National Institutes of Health)

Something wonderful sometimes happens when scientists and the public get together to talk about research. All the jargon, all the technical language falls away, and it becomes instead a conversation between the two groups with most at stake: the people in need of a treatment or cure and the people trying to develop it. One such get-together happened in July, when the California Institute for Regenerative Medicine (CIRM) joined with the AIDS Project Los Angeles to hold a Town Hall event in West Hollywood called “HIV Matters — Countdown to a Cure: California Leads the Way.” Nearly 120 people showed up to listen to stem cell scientists from USC, City of Hope, Calimmune and Sangamo Biosciences — all of whom are using CIRM funding to develop new treatments and hopefully even cures for HIV/AIDS.