USC activities reach far beyond the school’s campuses: The university is deeply involved in the local community. From the Neighborhood Academic Initiative to two charter high schools, here’s a look at some of the ways USC stayed in touch with its neighbors during 2015. 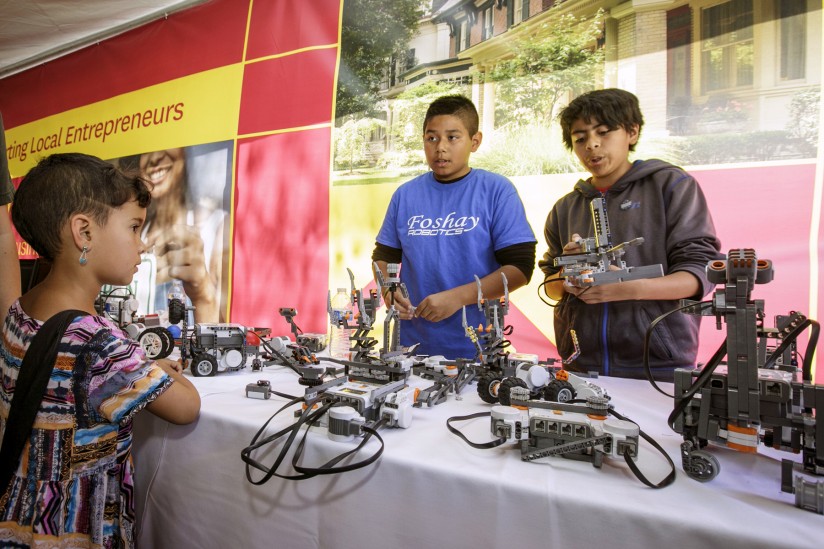 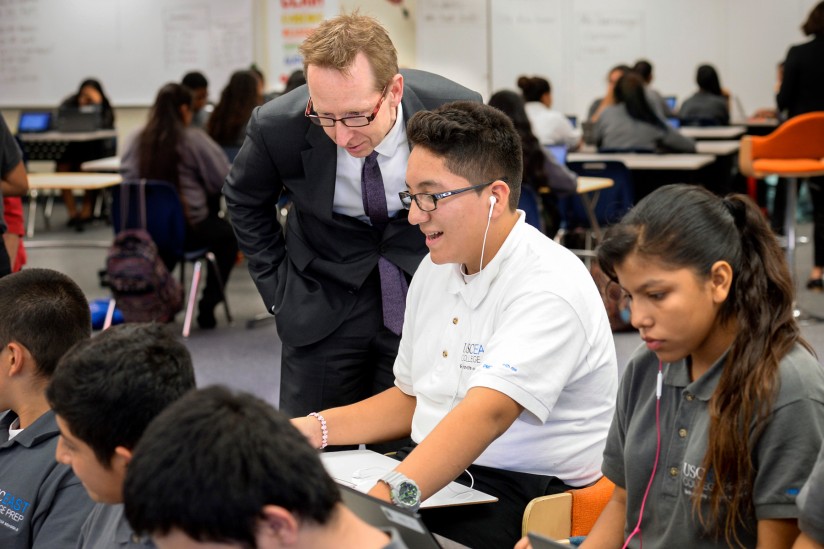 USC Provost Michael Quick talks with student Richard Hernandez, 14, during the opening and dedication of East College Prep in Lincoln Heights. The school, near the USC Health Sciences Campus, is the second USC-operated charter high school in Los Angeles. 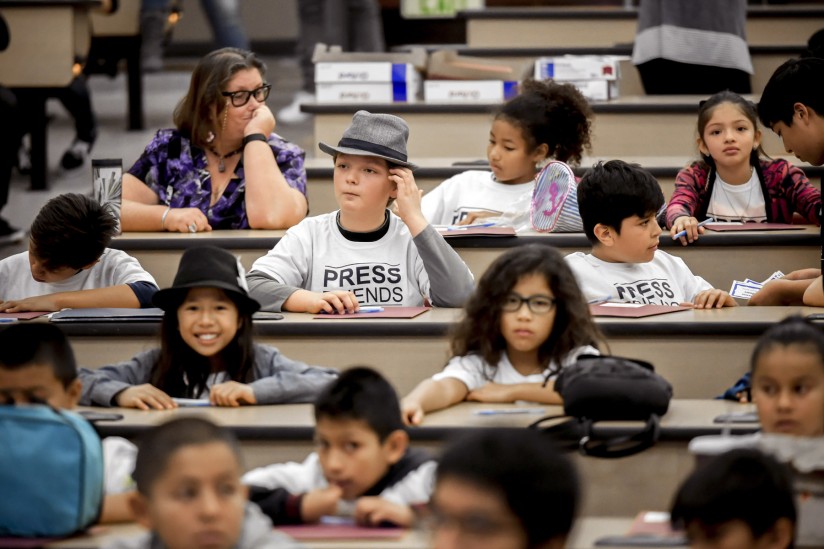 Press Friends — elementary students were who were mentored by USC students and worked on articles for their school or program newspaper — attend the Global Health Symposium for Kids at the USC Health Sciences Campus. The program was funded by the Good Neighbors Campaign, an annual effort through which USC faculty and staff donate part of their salary to help the neighborhoods surrounding the two USC campuses. 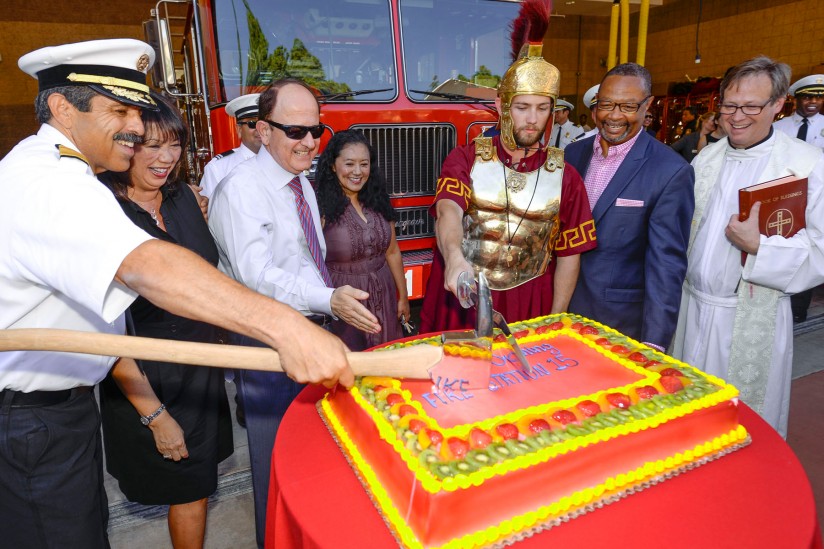 Los Angeles Fire Chief Ralph Terrazas, left, and state Assemblyman Reginald Byron Jones-Sawyer, second from right, join USC President C. L. Max Nikias at the grand opening of the new Fire Station 15. The state-of-the-art facility, at Hoover and West 30th streets, was built by USC to replace the previous station, located on the site of the USC Village project. A portion of the old station was relocated to the Robert Zemeckis Center for Digital Arts, where it will be repurposed as a production studio.

Playing in the park 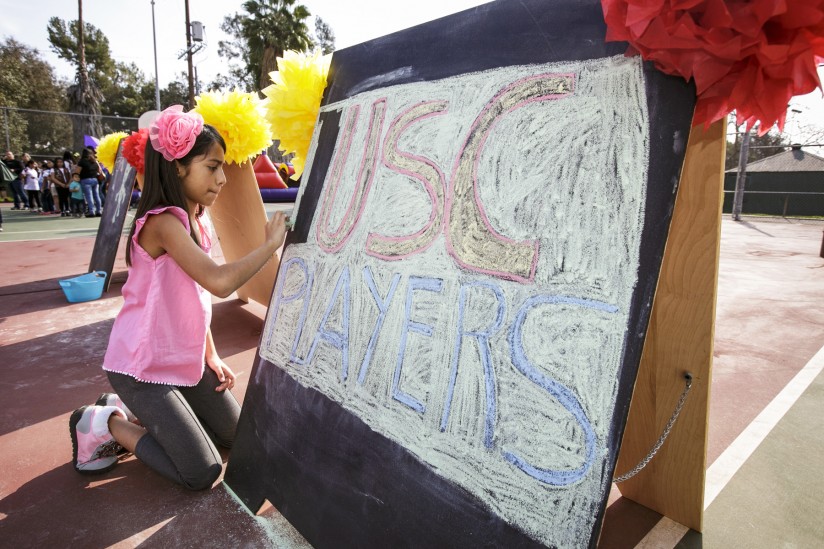 Sarah Del Rio works on a USC-inspired chalk drawing during a community reception celebrating the completion of USC-funded improvements to Hazard Park. USC contributed $1.1 million toward a new jogging path, outdoor fitness zone and new toddler zone, as well as improvements to the tennis and basketball courts, and $100,000 for youth sports programming at the park adjacent to the Health Science Campus.

Athletes of all sizes 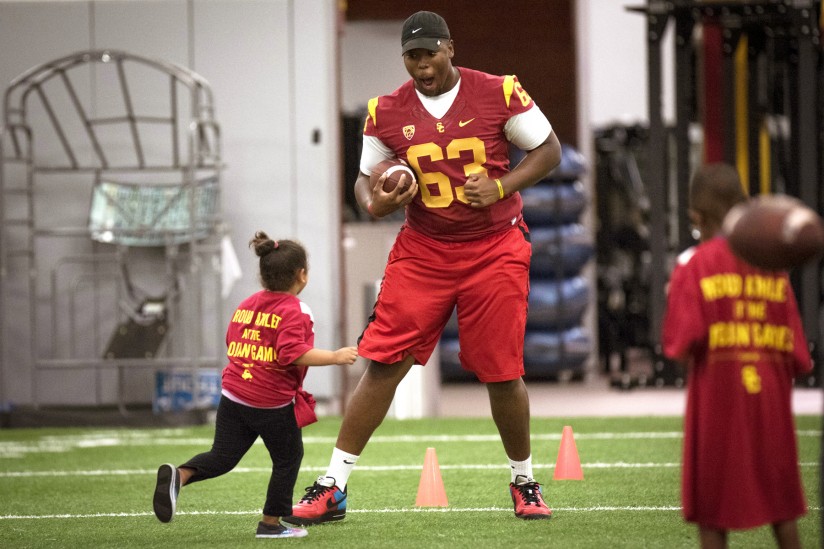 USC athletes hit the field with local children for first-ever Trojan Games in July. Kids teamed up with USC sports standouts for football, soccer and more, then headed to the Special Olympics World Games. 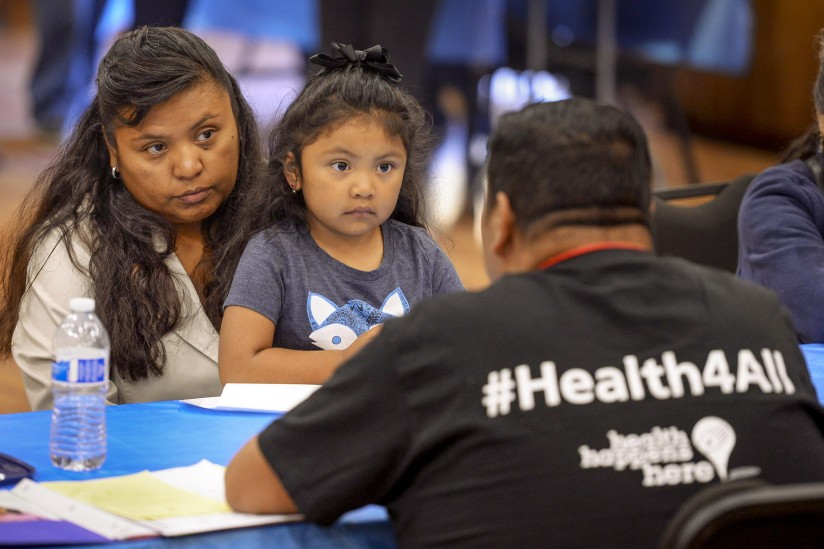 Sarai Espinoza and her daughter, Alexa Ordonez, sit patiently as paperwork is filled out by an enrollment volunteer during the Amate y Asegurate health care program in Boyle Heights. The event was funded by the USC Good Neighbors Campaign. 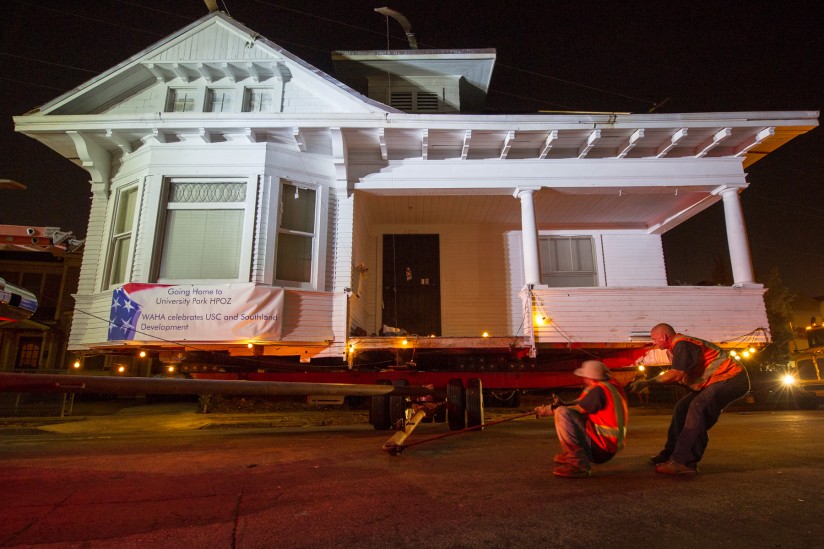 Middle-of-the-night relocations in July will allow the preservation of two turn-of-the-century homes, which will be restored as community housing. USC needs the homes’ original location, so the university relocated the historic buildings from Royal Street to a vacant lot on Portland Street. 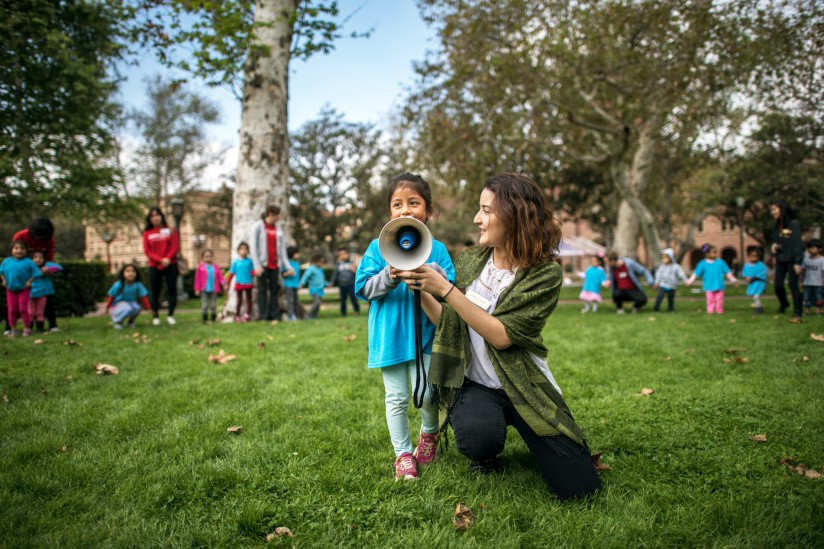 The youngsters on campus Feb. 27 — more than 120 of them — were guests of Jumpstart and EdMonth, invited to explore what they want to be when they grow up. Jumpstart’s group of more than 40 core members serve preschool children in low-income neighborhoods near the university, teaching them vital language and literacy skills. EdMonth is a student-led program devoted to raising awareness about the state of education.

Glimpse of the future 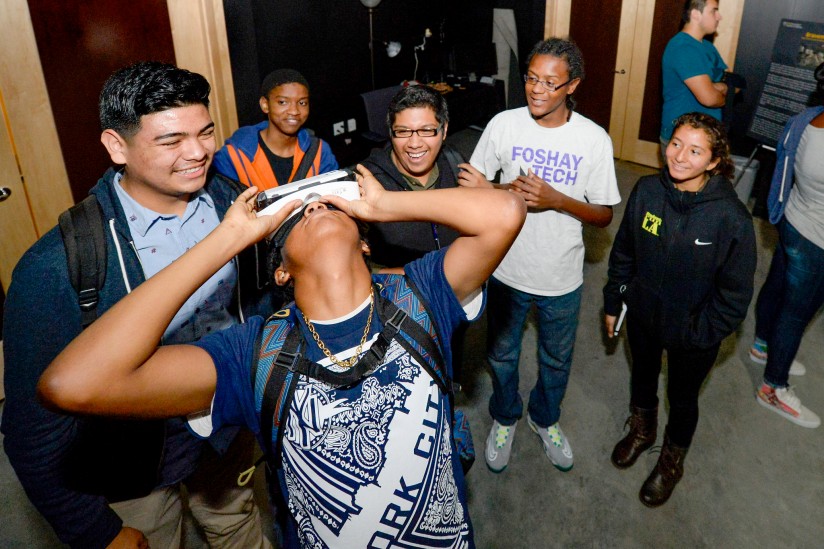 Foshay students glimpse the future at a USC Institute for Creative Technologies’ field trip featuring demonstrations of immersive health, education and entertainment technologies and discussions of computer-related career paths. Here Foshay students, many of whom are NAI scholars, try out Gear VR, a device that uses a smartphone to create a virtual reality headset.