A visitor went to the GamePipe Laboratory to hear what one of LA’s biggest economic engines sounds like.

It’s loud, multilingual and multiplatform. And this is the year it will surpass Hollywood, its older entertainment sister, by a whopping $27 billion, according to Global Games Market Report.

The film capital of the world wept, for example, when on Sept. 17, 2013, it watched Grand Theft Auto V rake in $800 million in global sales in its first 24 hours — the biggest launch ever for any piece of entertainment ever produced.

This semester GamePipe unveiled 24 games built in the fall, including work from mobile, networked, immersive, engines and advanced games courses.

One of these is Recall, a virtual reality game that uses machine learning, performance and storytelling to improve memory. For those who love to spend their winter nights with a cup of hot coffee pretending to be Sherlock Holmes — you must play Recall. But put down the hot coffee, as this game completely sucks you in.

Recall, the brainchild of USC Viterbi School of Engineering’s Lukas Ferrer, is more than a game — it is a virtual reality mind-hack. Inspired by the spatial and imagery based mnemonic techniques of competitive memorizers, Recall puts players in VR “mind-palaces” built from their own digital documents. In essence, it turns your documents into playable “levels” designed for easy memorization. Instead of reading something on paper, you explore it in VR.

“You live the document,” said Jyotsna Kadimi, the game’s co-lead designer and producer, a USC Viterbi graduate student in electrical engineering. “Why read about Rome when you can be in Rome?”

It may look simple, but under the hood Recall runs on sophisticated natural-language processing and deep-learning concepts such as those pioneered by the computational linguistics group at USC’s Information Sciences Institute. 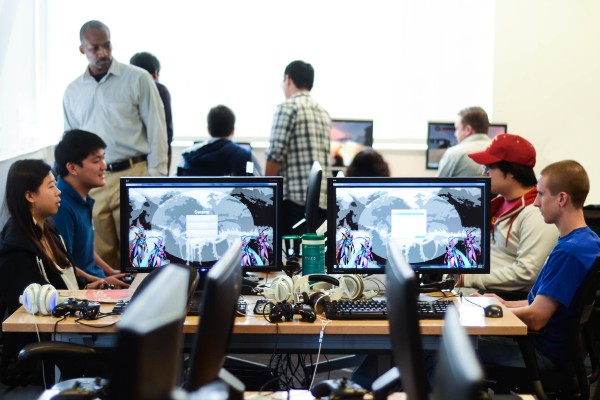 Computer science chair Gaurav Sukhatme believes students benefit tremendously from this collaboration. He views modern computer science as “a remarkably creative discipline” and encourages students to evolve with the times.

Tracy Fullerton, Interactive Media & Games chair agrees: “Like film and literature, games are artistic expressions of our culture. And they come out of the alchemy of these diverse teams, each with their own unique skills and vision that bring new, unique voices to the field.”

Under the USC Games umbrella, the GamePipe Laboratory has cast a deep stake in the industry with award-winning games like The Misadventures of P.B. Winterbottom that originated in the lab as an IMD student thesis project built in the advanced games course. According to GamePipe Lab founding director Michael Zyda, more than 1,500 students have passed through courses in the lab. His alums have shipped games played by more than 2.5 billion.

“Visit Activision, Blizzard or any of the biggest industry players and you’ll bump into loads of USC Viterbi CTOs, designers and lead engineers working on juggernauts like Call of Duty, Destiny and Grand Theft Auto,” Zyda said.

Whether it’s five minutes of mind-numbing gunk of phone play on the train or 14 hours of transformative journeys through a lushly painted virtual world, games will continue to shape our human experience.

The next one you play might very well have originated in USC’s GamePipe Lab.

A seasoned director tells students how to best approach the ample opportunities that await.

GamePipe Showcase and Demo Day offer a look at the billion-dollar games that may soon be played around the world.