People who experienced high anxiety any time in their lives had a 48 percent higher risk of developing dementia compared to those who had not, according to a new study led by USC researchers.

The findings were based on an examination of 28 years of data from the Swedish Adoption Twin Study of Aging, overseen by the Karolinska Institutet of Sweden. The study sample involved 1,082 participants — twins, fraternal and identical — who completed in-person tests every three years, answered several questionnaires and were screened for dementia throughout the study. 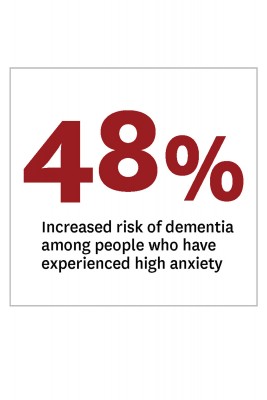 Many other studies have explored the link between dementia and psychological variables such as depression and neuroticism. However, this study established that the anxiety-dementia link was independent of the role of depression as a risk factor.

“Anxiety, especially in older adults, has been relatively understudied compared to depression,” said Andrew Petkus, the study’s lead author and postdoctoral research associate of psychology at the USC Dornsife College of Letters, Arts and Sciences. “Depression seems more evident in adulthood, but it’s usually episodic. Anxiety, though, tends to be a chronic lifelong problem, and that’s why people tend to write off anxiety as part of someone’s personality.”

A final draft of the study was made available online last week in Alzheimer’s & Dementia: The Journal of the Alzheimer’s Association.

The researchers noted that the subjects had self-reported various levels of anxiety, which may or may not meet the clinical diagnostic threshold of a psychiatric anxiety disorder. Even so, the twin who developed dementia had a history of higher levels of anxiety compared to the twin who did not develop dementia. 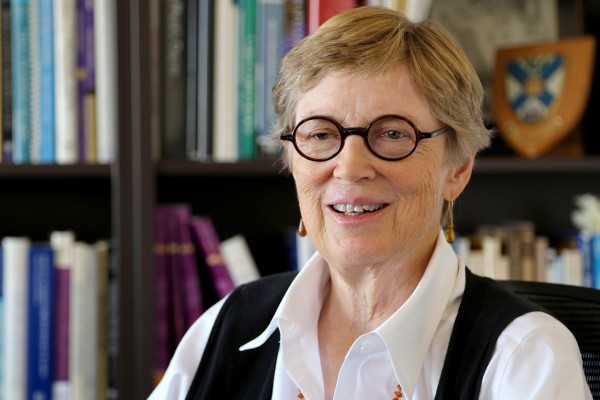 Margaret Gatz is a professor of psychology at USC Dornsife. (Photo/Matt Meindl)

The subjects with anxiety who later developed dementia “are people that experience more than usual symptoms of anxiety,” said study co-author Margaret Gatz, a professor of psychology at USC Dornsife, who holds joint appointments at the USC Davis School of Gerontology and the Keck School of Medicine of USC.

“They are people who you would say operate at a ‘high level of anxiety,’” said Gatz, also a foreign adjunct professor for the Karolinska Insitutet. She said they are fidgety. “They are frantic, frazzled people.”

“Those in the high anxiety group were about 1.5 times more likely to develop dementia,” Petkus said.

Petkus said people who have high levels of anxiety tend to have higher levels of stress hormones, including cortisol. Evidence shows that chronically high levels of cortisol damage parts of the brain such as the hippocampus, which stores memory, and the frontal cortex, which is responsible for high-level thinking.

The USC team also hopes to determine whether individuals who have been treated for anxiety earlier in their lives show lower risk of dementia compared with those whose anxiety was not treated.

The Swedish Twin Registry overseen by the Karolinska Institutet is one of the largest databases in the world and has been the basis for more than 30 research projects and hundreds of publications related to aging and disease. The Swedish Adoption Twin Study of Aging is funded by grants by the MacArthur Foundation Research Network on Successful Aging, the Swedish Council for Working Life and Social Research and the Swedish Research Council.

The journal Alzheimer’s & Dementia focuses on the scientific, medical and practical care issues for researchers and practitioners. Coverage extends from healthy brain aging to all forms of dementia and includes original peer-reviewed articles detailing clinical research advances as well as conference reports and abstracts. Specific areas of coverage include developments in early detection, intervention, prevention and application of new technologies in health services.

Audiovisual version of a fotonovela co-developed by Margaret Gatz and Mel Baron informs the Latino community about consulting a physician as soon as possible.

The device, designed at USC, builds on research involving electrical signals that travel across regions of the brain’s memory center.

USC Viterbi professor studies the damage that can prevent the brain’s formation of memories.