Ever since USC alum George Lucas created the original Star Wars back in 1977, the film series has enthralled and inspired young and old — including some of USC’s leading researchers, scientists and academics. Take a look at how the Force is with a few of them.

Before becoming an assistant professor in the USC Viterbi Department of Computer Science, Hao Li was a research lead at Industrial Light & Magic, the Lucas-founded visual effects firm that helped bring Star Wars to life. “This is my office,” Li said of the photo below, “and this is what we did all day when we were working at ILM.” 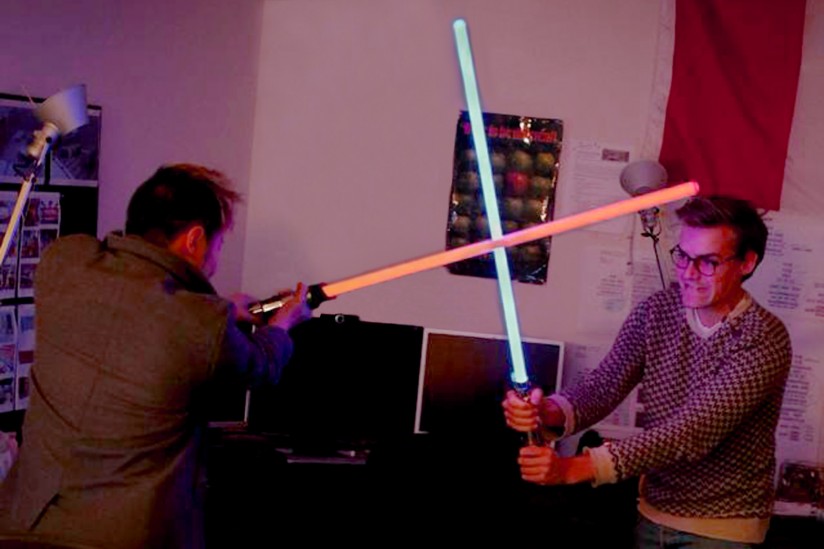 “By the time I was in grad school at MIT, it was a matter of nerd culture to do what we now call ‘binge watching’ and see all three of the original Star Wars movies in one night with a bunch of friends …

“One of the things we always did was laugh hard at the very start of the first movie, when R2-D2 was rolling over the sand dunes — because that would never work!  But I have multiple miniature R2-D2s in my office on the robot shelf. I was always much more partial to R2-D2 than to C-3PO.” 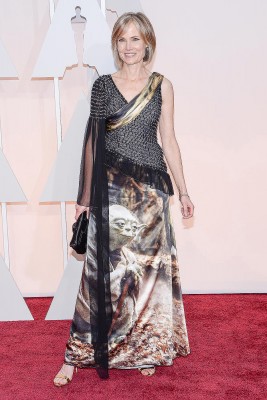 As director of the USC Annenberg School of Journalism, Willow Bay has overseen the launch of the Julie Chen/Les Moonves and CBS Media Center at Wallis Annenberg Hall as well as revamps of the graduate and undergraduate curricula. She also wore this Force-ful dress on the red carpet at the 2015 Oscars. Does that make her a Star Wars nerd? “It’s the designers — two sisters behind the design label Rodarte — that are the ultimate geeks,” said Bay, referring to Kate and Laura Mulleavy, the Los Angeles-based designers who came up with several dresses based on pivotal scenes from the film.

“Star Wars (1977) is one of my favorite movies of all time. I was away at summer camp, and my dad wrote me a letter saying, ‘You have to see this movie.’ It was the first movie I ever saw where the audience spontaneously burst into applause when the final credits went up. We were so psyched!” 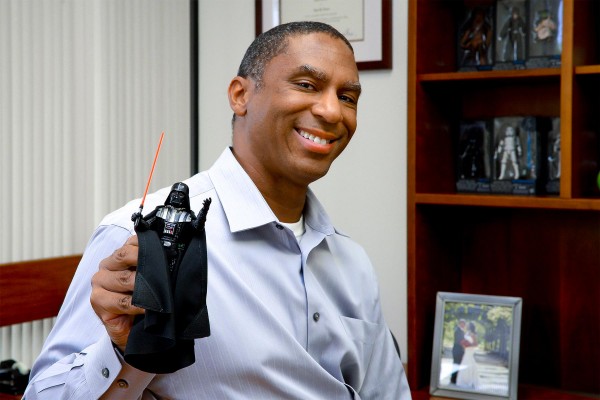 Kyle Jones, here with a Sith Lord friend, is assistant dean and dean of students at the USC Gould School of Law. (USC Photo/Gus Ruelas)

Star Wars figures fill the top two shelves of a bookcase in the office of Kyle Jones, dean of students at the USC Gould School of Law. Jones put the collection there for a reason: to reassure the young people who need his assistance. “When they walk in that door,” he said, “it’s the first thing they see. It immediately sets them at ease. It says, ‘Maybe this guy is going to be someone who is willing to listen to me.’ ”

The highly anticipated installment in the Star Wars series spurs a lighthearted look at USC traditions with a Sith Lord spin.

Lightsabers, holograms and humanoid robots are part of the movie world — and real-life work at USC, too.