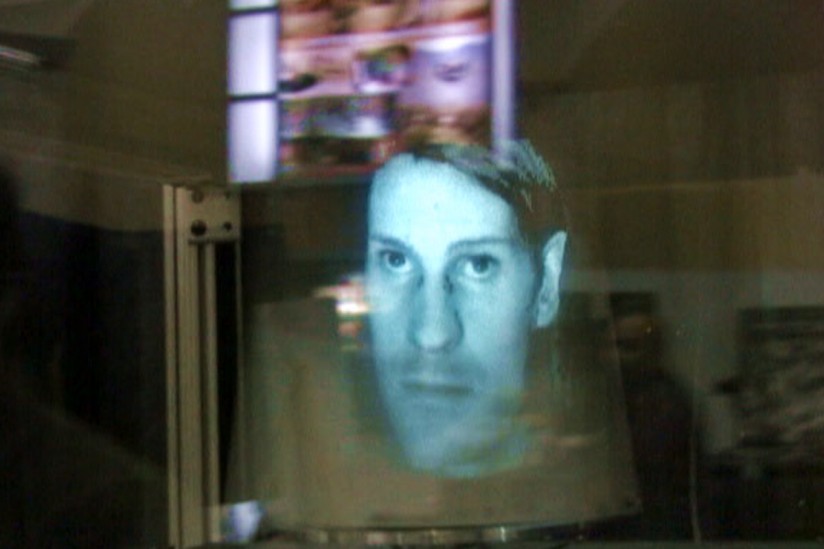 Andrew Jones, a member of the ICT team, appears remotely during a demonstration of the institute’s 3-D videoconferencing technology. (USC Photo/Institute for Creative Technologies)

The star-studded Hollywood premiere of Star Wars: The Force Awakens happened down the street, but at USC, researchers are working on real-life futuristic technology — technology that looks a lot like the stuff of moviemakers’ imaginations. 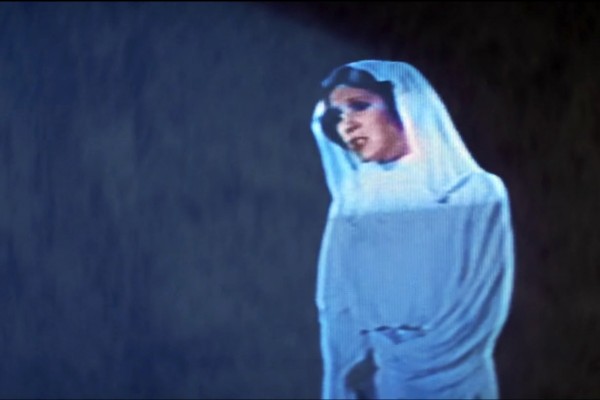 The virtual Princess Leia is ingrained in people’s minds as the prototypical hologram. (Photo/Lucas Films)

When it comes to holograms, for instance, Paul Debevec – chief visual officer at the Institute for Creative Technologies – said the public will always remember one hologram above all others: “Princess Leia coming out of R2-D2 and telling Obi-Wan Kenobi that he was her only hope sticks in the public consciousness of what a hologram is supposed to be.”

That one depiction, from a movie 30 years back – which wasn’t a hologram at all, but a composited video image – has shaped what people expect from holographic displays.

At ICT, Debevec and his colleagues are working on three-dimensional displays created from a spinning surface. The effect is that of an object that looks real, floating in space, without the need of virtual-reality goggles.

They are also working to create a 3-D video conferencing system, one Debevec said was actually inspired by Star Wars. “There’s a moment when Yoda is supervising some operations on the Wookie planet but he still has to go to the Jedi Council meeting, so he shows up at the meeting as a hologram,” he said.

Debevec hopes that the system, which may be ready to demonstrate next year, will help people attend business meetings across the world, while cutting down on travel and carbon emissions. 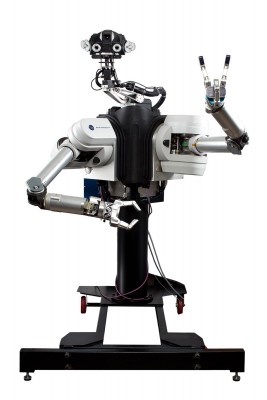 Mandy Robot, from the USC Viterbi School of Engineering, can quickly remove lug nuts from a tire with a wrench and knows how to use a drill, but can be gentle, too. (Photo/courtesy of USC Viterbi)

To help humans in the Star Wars world, the moviemakers created robots – from the iconic R2-D2 and C-3PO from the original movies to the cute, rolling BB-8 in the new film. Naturally, those robots need to be able to go where people go.

When looking at the new movie’s rolling robot, USC’s Stefan Schaal wondered what the designers were trying to create. “In general, rolling stuff is great on flat terrain,” said Schaal, a professor of computer science, neuroscience and biomedical engineering. “For anything other than that, legs seem to be what nature prefers, and a better choice.”

Unfortunately, real robots are nowhere near what audiences see in the Star Wars universe. “There’s not a single robot which can manipulate the world with two hands or walk on two legs like we do,” Schaal said. “We are still working on the real basics of all these components.”

Industrial robots already have proven their worth, Schaal said, but robots are soon coming to unstructured environments. One area where robots may prove extremely useful in the near future is helping humans in their homes – especially older people who want to remain independent but have trouble picking things up or reaching high shelves.

“I think that within the next 10 to 20 years, we will see a large number of robots that will start to be useful in human environments,” he said. Those bots could initially be little household helpers that could be cloud-computed. Maybe those will be the droids people are looking for. 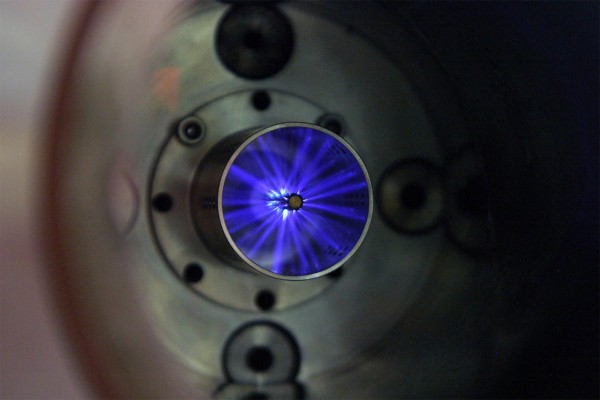 Let there be lightsabers

One of the most memorable pieces of Star Wars technology is the lightsaber, which is actually a magnetically or electrically confined plasma blade, according to the filmmakers. Martin Gundersen, a professor of electrical engineering who leads the pulsed power group at USC, said that nothing like that exists today: “The magnetic field would be a big challenge.”

Gundersen and colleagues are using plasma for novel purposes, though: They are using pulses of plasma to reduce emissions on cargo ships and ignite combustion more efficiently.

ICT’s Debevec said that there is a great flow of ideas between science fiction and research. “I think that it’s a wonderful two-way street: A lot of kids get inspired to go into science because of these movies,” he said. “It gives us something to shoot for, but it doesn’t solve the real problems of today.” The researcher has his tickets purchased, and is looking forward to being transported to a galaxy far, far away.

The highly anticipated installment in the Star Wars series spurs a lighthearted look at USC traditions with a Sith Lord spin.