Whether or not you’re a business major, it can be intimidating to jump feet-first into the world of startups. Incubators often ask a lot of would-be CEOs, from a business development plan to a solid elevator pitch. But what if you’ve never had a business class? Where do you turn for lessons in Startup 101?

Over the past year, a USC program has taken an open-door approach to entrepreneurship that stands apart from other incubators on campus. Students, as well as faculty and USC alumni, can drop in with nothing more than a great idea and emerge with a business plan and a strategy — all for free.

Blackstone Launchpad USC officially opened in the fall of 2014 as part of a national initiative providing mentorship and support to college students. The Blackstone Charitable Foundation — an altruistic arm of the investment banking firm The Blackstone Group — funds similar programs at 22 campuses across the nation and internationally, including UCLA and the University of California, Irvine, at the local level. 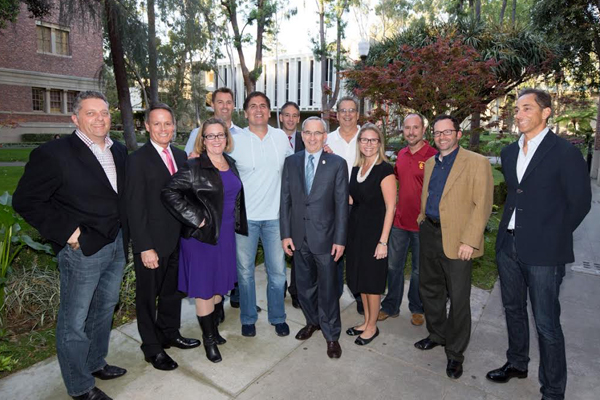 The idea, according to director James Bottom, is to lower the barrier of entry for students from all disciplines who are interested in entrepreneurship. In just a few appointments, they’re able to put together a business plan, research startup competitions and learn how to speak with investors.

The goal is to develop the next generation of LA startups from among USC’s students, boosting the local economy at the same time.

“Investors and venture capitalists are getting very excited about investing in startups in the university setting,” Bottom said. “Working with organizations like Blackstone Launchpad and the other incubator programs on campus is the first step to creating a dynamic startup funnel. This helps cast a wide net on campus, and we begin grooming the best of the best to be successful.”

In one year, Launchpad has worked with 200 active startups and participated in 240 events. The space the Launchpad occupies, across from the Annenberg Innovation Lab, is a source of constant activity: Walk in on any given afternoon, and you’ll probably hear several of its dozen 3-D printers turning out prototypes.

The following are a few of the startups that have passed through the Launchpad program.

People go to school trying to learn to make a 3-D shape in a 2-D interface, and it’s just stupidly hard.

“People go to school trying to learn to make a 3-D shape in a 2-D interface, and it’s just stupidly hard,” said CEO Max Pittsley, a recent graduate of the USC School of Cinematic Arts. “But if I can learn in a 3-D interface using my hands, and I want to make Stonehenge, all I have to do is trace the shape.”

How business is going: Freeform Labs has already adapted the software into a “world-building” game in the vein of Minecraft. The game, called Elementerra, allows players to shape landscapes with the movement of their hands. http://www.elementerravr.com/

“We’ve been talking to investors for a couple weeks now, getting a sense of the kind of stage we’re at and who we should be looking for money from,” Pittsley said. The startup is currently working on a business development plan.

How Launchpad helped: Both Pittsley and co-founder Camille Kanengiser know how to manage a production pipeline, but the world of finance was unfamiliar territory.

“That’s exactly what the folks at Blackstone are supremely well versed in,” Pittsley said. “They’ve been our compass through the process of establishing capital.”

Launchpad put them in touch with a Blackstone adviser. Through him, they learned how find angel investors, understand how a cap table works and how to seek out warm introductions with potential investors.

“It’s sort of been a boot camp for us,” Pittsley said. We certainly feel a lot better off.”

The idea: Pulp Pantry, a healthy food company using vegetable and nut juice pulp — normally a wasted byproduct of commercial juice bars — to create food that is good for consumers as well as the planet.

“The overarching goal is to help organic juice bars and food businesses beyond transition into zero-waste facilities,” said CEO Kaitlin Mogentale ’14. “Currently there’s no incentive to send this stuff to compost.”

How business is going: Mogentale came up with her idea after watching a friend juice a carrot in her senior year. As an environmental studies major, she was taken aback by just how much pulp gets thrown away compared to the relatively small liquid amount. She took the pulp home to make carrot cookies.

Since then, she’s started working with individual juicers, selling her baked goods in stores, at farmers markets and at events catering to health food consumers. One juicer told her they produce about 2,000 pounds of pulp a week; her hope is to start collecting pulp from distribution centers for national juice brands.

“I can’t even put a number to how much they must be throwing out,” Mogentale said.

How Launchpad helped: After Bottom spoke at an entrepreneurship class Mogentale was taking, she reached out for help with pitch competitions. Launchpad helped assemble a sales plan, marketing strategy and financials for the business.

“For me, it was about how to concisely express what I’m trying to do in a standard format,” Mogentale said. “I loved James’ talk about the story or idea of the business. That helped me hone in on the narrative. I feel more comfortable in the entrepreneurship space now.”

The idea: Swayy, an advice and decision-making on-demand app. Swayy lets users “vote” on everything from favorite fashion to fantasy sports. Users are presented with two options and can swipe their phone to vote on one or the other. Co-founder and chief operating officer Andrew Costa, an MBA student at the USC Marshall School of Business, said the app was developed because he and his partner felt overwhelmed by the small decisions they faced every time they had to go out — what to wear, where to go, etc. They saw value in being able to crowdsource those decisions.

How business is going: Swayy launched in September, swelled to 10,000 active users and signed an affiliation with a fantasy sports contest provider. They also brought on 30 different “experts” that offer users free advice.

“If you have a clothing decision, you can put in a poll to a fashion designer,” Costa said. “Or you can send your fantasy football decision to a sports expert. The experts do the marketing for us because they want to engage with fans.”

How Launchpad helped: “James has a great relationship with Amazon Web services that built out our back end,” Costa said. “It gets a little pricey to pay for those kinds of services, and it’s really something you don’t want to spend too much on. It’s easy for $200 bucks a month to turn into $2,000 really quick.”

Costa said the Web services savings will free up capital for other investments. He also hopes to benefit from Launchpad’s contacts: “We’re at about the point where we’ll be raising Series A, and they have great connections.”

Zac Coughlin, who earned his bachelor’s degree in communication in 2021 at USC Annenberg, has gone on to become one of the few Black bakers in Los Angeles.

So you want to be an entrepreneur?