In 2014, the Pacific Ocean was primed for a strong El Niño season. Warmer-than-normal sea surface temperatures across the central and eastern equatorial Pacific led scientists to believe that conditions would provide the perfect storm for a wet winter in the western United States.

But that didn’t happen. In fact, 2014 had one of the driest winters on record.

Defined by the National Oceanic and Atmospheric Administration (NOAA) as a one-month sea surface temperature increase of 0.5 degrees Celsius or greater in the equatorial Pacific Ocean, El Niño generally brings greater-than-normal amounts of rainfall to California.

Lowell Stott, professor of earth sciences at the USC Dornsife College of Letters, Arts and Sciences, and his research group investigate Earth’s climate variability, including El Niño. But Stott emphasized that El Niño isn’t the only factor to consider when predicting weather patterns.

His work is part of a multidisciplinary, five-year project funded by the National Science Foundation to better understand how changes in the ocean’s surface temperature affect atmospheric behavior and ultimately influence whether California will remain in a long-term drought.

“We received this grant in large part due to USC’s Center for High-Performance Computing,” Stott said. “Here, we have rare access to a supercomputer that can be used for large, complex model simulations.”

Using these computerized climate system models, Stott and his colleagues track climate variables such as how sea surface temperature can influence storm tracks. But despite the strength of the computer models, he emphasized that there are numerous climate variables at play. Accurately predicting how all the variables will coalesce to influence precipitation over California remains a formidable challenge.

“This year, while indeed there is evidence that we are headed into a strong El Niño, that by no means guarantees we will have excessive rainfall,” Stott said. “And one year of increased rainfall would not take California out of its drought.”

Beware of ‘the blob’

Another condition Stott and his colleagues are studying is a large mass of warm sea surface temperatures in the northeastern Pacific known as “the blob.”

Modeling experiments have taught us that the atmosphere is a rather chaotic beast.

“In model simulations, the blob affects atmospheric circulation to bring about more rainfall in Northern California, but it didn’t last year,” Stott said. “Modeling experiments have taught us that the atmosphere is a rather chaotic beast — with a lot of natural variability.”

Despite running the simulated experiments multiple times with the same sea surface temperatures, Stott and his colleagues found that some of the simulated winters are wet and some are not.

“On average, the blob tends to produce wetter winter conditions, but simulations also show that it causes a greater range of variability,” he said. “That means there is also a greater likelihood of having a year with drier conditions. We think last year was one of those outliers.”

Stott also pointed out that scientists have not yet run model simulations with both El Niño and the northern Pacific blob simultaneously — which makes for even more uncertainty.

“There are some experts who believe the warm blob itself is really anomalous,” Stott said. “They argue it is an unusual anomaly — not a recurring one. But we don’t have any observational data sets going back long enough to say definitively one way or the other.” 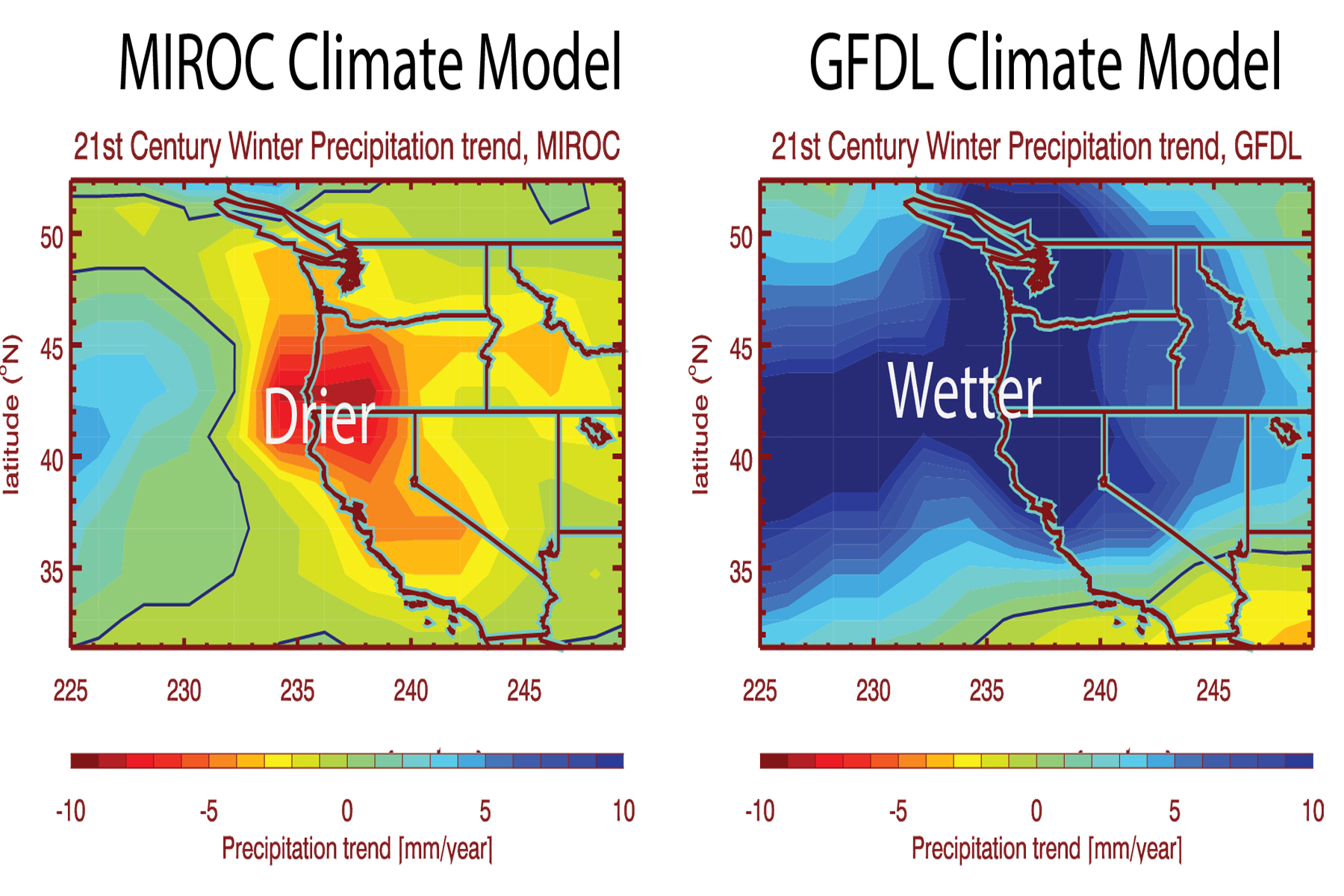 Where do humans fit in?

Another area under great scrutiny is the interplay between El Niño and anthropogenic, or human-caused, climate change.

“We know over the course of the late 20th century, the north Pacific has been warming,” Stott said. “What makes that important is that there are temperature changes taking place not just at the surface but also in the subsurface.”

He pointed to a recent report making the case that subsurface warming has caused a release of methane from the sea floor, which will eventually make its way to the surface and add additional greenhouse gases to the atmosphere.

“This compounding variable has a lot of people concerned that, as the ocean continues to warm, it will not only affect atmospheric circulation, but also add to a release of excess greenhouse gases, which would make for an even more serious warming,” Stott said.

Stott believes more data must be collected and climate simulation models must be improved to take into account an ever-increasing number of variables.

“There is a real urgency to resolve what may be wrong with the current generation of climate models because they are being used to predict how California’s water supply will change as the climate warms,” Stott said.

Know Tomorrow will transform McCarthy Quad into an ‘eco-hangout’ where students can learn how to shape national policy and help find solutions for a sustainable future.

Are we ready for El Niño?