The first time Russ Romano, associate athletic director for athletic medicine, asked Stephen Reischl to come look at one of his athletes was in 1999.

One of the Trojan football players had been benched with a bad ankle, and Reischl, adjunct associate professor for clinical physical therapy in the USC Division of Biokinesiology and Physical Therapy, specializes in disorders of the foot and ankle.

Reischl found that the player had significant dysfunction in his ankle. Teaming up with Romano, they developed a new training regimen that kept the player out of the operating room and got him back on the field for his entire senior year. Romano and Reischl cheered their combined effort when that player went on to play with the NFL.

Reischl went back several times to look at other athletes, and eventually Romano asked other faculty members from biokinesiology and physical therapy to consult on a difficult problem with one of their athletes. What started as a one-time consultation has since grown into a lasting partnership.

For more than a decade, USC Athletic Medicine has combined the talents of its athletic trainers with physical therapists from the nation’s top-rated physical therapy school to keep the athletes performing at their peak.

“USC is a special place and one of the ways it is special is there are smart people in many departments who can help us provide the absolute best health care for the student-athletes,” Romano said. 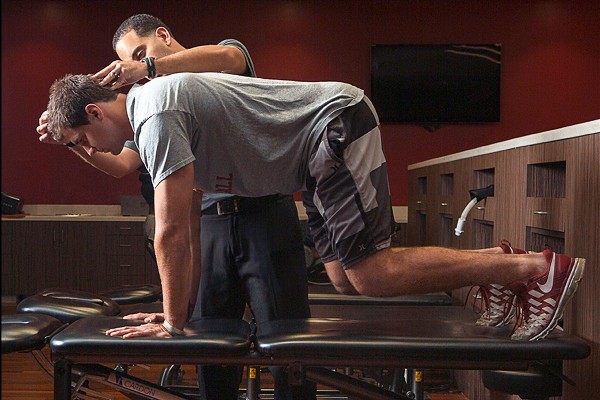 Reischl now serves as a permanent liaison between the two departments, and Romano has since hired four graduates — three of whom are also division faculty members — from the division’s doctor of physical therapy program (John Meyer, Drew Morcos, Stephanie Hong and Lisa Noceti-DeWit) to help keep USC’s athletes healthy. Meyer was recently promoted to associate athletic director for sports science and performance.

Treating athletic injuries has evolved in recent years, as has the practice of physical therapy. Morcos, rehabilitation coordinator for the John McKay Center, said athletic injuries in the past were often treated with ice and rest. Treating injuries in that fashion not only takes longer than necessary, but it doesn’t often fix whatever problem led to the injury in the first place.

Staying off the sidelines

These days, the physical therapy team at USC is squarely focused on preventing injury so that these athletes don’t ever get sidelined.

At tennis practice, you’ll find both the coaches and Morcos studying the athletes’ movements. While the coaches are watching their players serve to see how much spin they can put on a ball or how fast they can get the ball over the net, Morcos is reading the way they move and determining whether they are doing anything that could cause injury.

Morcos points out that many injuries are the result of moving in a way that, if repeated for a long time, can cause damage. The first thing Trojan athletes must do before each new season is report for a lengthy pre-season screening. Trainers want to make sure nobody is returning with lingering muscle strain or with pain in one of their joints. They also go through testing to evaluate each athlete for problems in mobility, strength and flexibility. If they find that an athlete is weak in one set of muscles or lacks flexibility in another, the trainer might tailor a program to help them deal with these problems before they lead to an injury.

Having physical therapists incorporated into the athletic training staff has become more common, Reischl said, but not every university has the ability to do so since they don’t all have physical therapy schools they can tap for insights and information on the latest research.

One research-based project that’s held promise for preventing injury has been in women’s basketball. 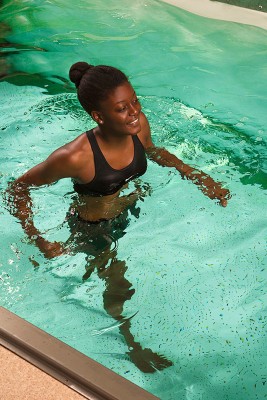 Basketball is one of those sports that can be really tough on players. Historically, female college basketball players have had higher rates of anterior cruciate ligament tears than other athletes.

The partnership with USC Athletics is mutually beneficial, with the experience benefiting students like Brian Lee, who is the first division student to do a third-year full-time clinical affiliation at USC Athletic Medicine.

Lee said sports has always been his passion. In fact, it was through his love of sports that he was first introduced to the idea of pursuing a career in physical therapy.

This fall, he landed a plum placement, getting the opportunity to treat some of the top Trojan athletes during his 16-week clinical affiliation.

He came by the placement after suggesting it to Todd Schroeder, with whom he works in the Clinical Exercise Research Center. Schroeder talked to Romano and Morcos about the idea and, in July, Lee got the news that he’d be spending the semester at the McKay Center.

“No classroom or textbook could replicate the real-life, hands-on experience I have been getting during this clerkship,” said Lee, who plans to do a sports residency after completing his doctor of physical therapy degree. “There is no better place to start to become an expert in sports rehabilitation than at USC Athletic Medicine.”

Average GPA for spring semester increases to 3.00, with 143 student-athletes on the Dean’s List.