In the next 15 years, the number of Americans aged 65 and older will nearly double to 67 million. While one in four Americans are now obese, by then, the rate will spike to one in two, USC researchers found. The 2030 Medicare recipient will likely be a woman, disabled and suffering from either one or a combination of chronic health conditions such as hypertension and diabetes.

On the positive side: She’ll also have either taken some college courses or obtained a degree, and she will be a nonsmoker. 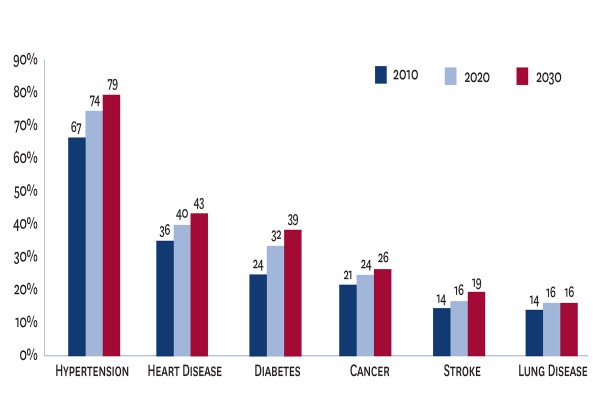 “It is clear from these numbers that preventing disease, rather than just treating it after it appears, not only would improve population health but could also save Medicare a lot of money,” said one of the study’s lead researchers, Dana Goldman, the chair and director of the USC Schaeffer Center for Health Policy and Economics.

“It makes no sense — both from a fiscal and population health perspective — to reimburse for treatment at the expense of prevention,” added Goldman, who also is a professor at the USC School of Pharmacy and the USC Price School of Public Policy.

A guide for continuity

The predictive study “Health and Health Care of Medicare Beneficiaries in 2030” is one of a special series published in the Forum for Health Economics and Policy. The edition features analyses by researchers at the Schaeffer Center and at the Brookings Institution, a national nonprofit public policy organization.

The studies are a guide for improving sustainability and continuity of the national health care system, which turned 50 this year:

“Payment reform is an important opportunity for the Medicare program to control costs and improve quality, but putting out voluntary models that are attractive enough to providers and then transitioning them to approaches that penalize nonparticipation will be challenging,” Ginsburg said. “The recent MACRA [Medicare and CHIP Reauthorization] legislation signaled strong bipartisan support for Medicare payment reform and provided the program with an important incentive to attract physician participation.”

“The statistics show immense gains in the absolute and relative well-being of America’s elderly,” Burtless said. “We can trace a lot of the improvement to more generous government programs — especially Medicare and Social Security. The budget outlook for those programs is grim, however. Future improvements in the fortunes of the elderly may therefore depend on their willingness to work longer and postpone the age when they depend on government programs to pay the bills.”

“Medicare today is a better program on almost every dimension than it was when Lyndon Johnson signed public law 89–97,” Aaron said.  “That law emerged half a century ago as a weird political compromise — something liberals could accept as the initial installment on what they really wanted [full national health insurance] and something conservatives could accept, partly because it came packaged with what, at the time, they thought they wanted [means-tested coverage of the poor, Medicaid]. We lay out several improvements that we think would make Medicare better for beneficiaries and taxpayers alike.

Competitive bidding among Medicare Advantage plans “would likely bring down the government’s cost and improve quality in high-cost urban areas where a substantial fraction of the Medicare population lives,” Rivlin said. “A more ambitious step of bringing traditional Medicare into structured competition with Medicare Advantage could yield additional cost savings.”

However, that could involve higher premiums for beneficiaries who choose to stick with more expensive plans.

“If some difficult issues can be resolved, well-designed competitive bidding could be part of a viable, well-funded Medicare that delivers quality care to seniors in 2030,” Rivlin said.

Can big data lead to lower costs for health care?

The USC-led study indicates that health care professionals and hospitals should be sensitive to stereotypes that could otherwise lead some patients to avoid care.

Medicare seniors likely to be sicker, live longer in near future