Many young architects nurse lofty ambitions to build bold skyscrapers that will enliven and dominate city skylines. Di Luo MA ’08, a doctoral student who earned her master’s degree from the USC School of Architecture, has no such goals.

Instead, Luo, who is in the final year of her PhD in East Asian languages and cultures at the USC Dornsife College of Letters, Arts and Sciences, is devoting her scholarship to some of the world’s tiniest buildings — the perfectly scaled wooden miniatures that adorn the ceilings and walls of Chinese Buddhist temples and monasteries.

“I study miniatures, especially those found in Buddhist temples from the 10th to 13th centuries,” Luo said. “I find it fascinating, especially as so few scholars have studied architectural miniatures in a systematic way, which means that currently there are no books or monographs on the subject. Plus, on one hand you can look at miniatures as architecture and on the other you can study them as pieces of art.”

A question of scale

All found in Chinese Buddhist temples or monasteries where they are part of the interior ornamentation of the building, these tiny and exquisite replicas are constructed as if they were actual buildings.

“They are made of wood, but they are not carved,” Luo said. “Instead they were built piece by piece, just like real architecture. For instance, the roof frame is constructed with rafters and beams and brackets. After the miniatures were assembled, they were painted in gold, vermillion, blue and green to replicate the colors of the original buildings.” 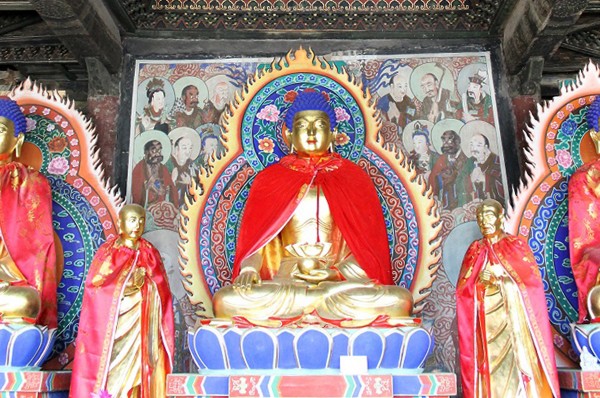 Chinese miniature architecture created between the 10th and 13th centuries was used to provide interior ornamentation in Buddhist monasteries and temples. (Photo/courtesy of Di Luo)

Measuring about 60 centimeters tall, they are built perfectly to scale.

“If you magnify them, they would be exactly right,” Luo said.

That, she adds, is why the miniatures are so valuable — because they cost so much time and energy to make.

“A Chinese architectural treatise dating from the 12th century mentions that it would take 1,525 gong [a Chinese unit to measure time, equivalent to 1,525 regular workdays or approximately 12,200 hours] to build one entire set of miniature buildings,” she said.

As an example, Luo points to the miniature halls, pagodas and towers that adorn the ceiling of a 12th-century Chinese Buddhist monastery.

“They’re significant because they have a religious value,” Luo said. “You look at them and you feel, ‘This is so unusual.’ In a way, it’s not unlike real architecture, which can impress you by its mass and size. But the miniatures are so small, they also impress you precisely because they are miniatures and because they make you feel different by separating you from your everyday experience.”

The miniatures are as enigmatic as they are beautiful.

We don’t know who made them or why. Their makers never left a name.

“We don’t know who made them or why,” Luo said. “Their makers never left a name.”

However, Luo said we do know they were expert architects because of their knowledge of the woodworking techniques and the mathematical formulas needed to build such perfect, scaled replicas.

“Unfortunately, we don’t know the names of many Chinese architects,” Luo said. “Architecture was considered to be quite a lowly profession in China and the names of patrons were recorded more often than those of architects, even if they created amazing buildings. The only architects’ names to have been recorded are those who worked for the imperial family, and even then we only have two or three.”

“It includes three chapters of instructions on how to make miniatures,” Luo said. “I began thinking, ‘Why is it that not many people are looking into these texts?’ I started attending conferences and wrote about my translation and about the miniatures and my interpretation. People were really interested and asked me a lot of questions, and I decided that this was the direction my research should take.”

In 2014, thanks to a Research Enhancement Fellowship awarded by the USC Graduate School and a doctoral grant from the Metropolitan Center for Far Eastern Art Studies, Luo traveled to China to spend three months visiting Buddhist temples and monasteries to research and document miniatures.

She credits three professors at USC Dornsife for support and mentorship during her doctoral studies: Dominic Cheung and Bettine Birge of East Asian languages and cultures and Sonya Lee of art history.

Luo is aiming for a career in academe as an architectural historian and is already applying for postdoctoral and tenure track positions.

“After I graduate, I would concentrate on Chinese architecture for the first three years because that is my strength,” she said.

However, one reason why miniaturization is so fascinating to Luo is because it’s not just a Chinese phenomenon.

“If you look at Japan, Korea and India, you see a lot of miniatures,” she said. “You can also see them in Western or Christian art. One of my future research directions would be to continue with the topic of miniaturization, but concentrating on finding it in non-Chinese art.”

USC students will join with students from other top national and international universities to study with counterparts in Japan, Korea and Hong Kong.

The USC professor delivers a lecture as a prelude to the upcoming launch of DreamWorks’ Shanghai studio.

Co-founder of the Watts House Project aims to help students understand the link between art and culture.

We’re facing an “infodemic” — an overload of information in which fact is hard to separate from fiction, two USC scholars and colleagues find.