A monumental moment in the history of the United States will be celebrated Dec. 6 when the 13th Amendment, which abolished slavery at the close of the Civil War, turns 150 years old. But despite the passage of time, the United States continues to struggle with racial inequality.

USC Gould School of Law Professor Ariela Gross has spent years unearthing the legal history of race, which she details in What Blood Won’t Tell: A History of Race on Trial in America (Harvard University Press, 2008).

It’s been 150 years since the 13th Amendment was ratified. Has society moved beyond the concept of race and racist ideology?

Today, race and racism are still with us. If it were true that racism in the past was based only on a now-discredited biological understanding of race — on blood — it would have been relatively easy to eradicate racism with colorblind policies. But despite the hard-won victories of 20th-century civil rights struggles — and even the milestone of an African-American presidential candidate — racism has survived, in part because its bases are shifting and mobile. For so long as many still believe that differing life chances do and should correlate with one’s performance of identity, one’s ability to achieve citizenship through “blood,” or one’s cultural practices, racism will persist.

What is race, anyway?

We tend to believe race is a fact of nature, a property of blood, that we know it when we see it. But race is a powerful ideology that came into being and changed forms at particular historical moments as the product of social, economic and psychological conditions. Fundamental to race is a hierarchy of power, and this story is about determining racial identity for particular purposes: enslaving some people to free others; taking land from some to give to others; robbing people of their dignity to give others a sense of supremacy.

Why draw racial lines after slavery?

After slavery, Southerners redoubled their efforts to maintain white supremacy through policing the color line. Northerners and Westerners, too, sought to exclude African-Americans and other people of color from public life and even expel them from towns and cities. Across the country, strict bans on interracial marriage led to sensational trials of racial identity, as did cases about school admission and cases of racial slander, in which one neighbor sued another for calling him a Negro. Why so much effort to determine racial boundaries? To uphold white privilege: enslave blacks, appropriate Indian lands, exclude immigrants from citizenship. 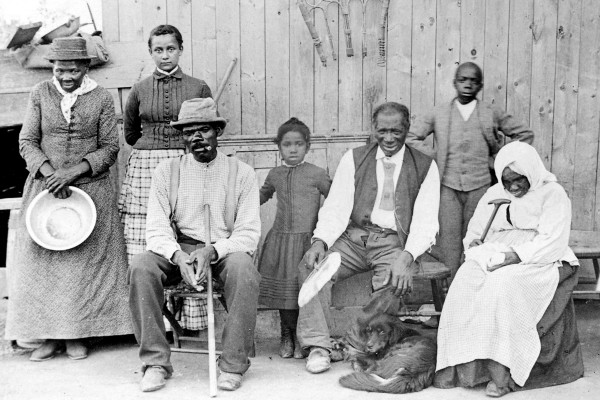 Harriet Tubman, far left, with her husband (seated, with cane) and others in 1887 New York (Photo/William H. Cheney)

Was Jim Crow just about black and white?

My book also tells the story of peoples who were neither black nor white. For example, in Indian territory, when the federal government started drawing up Indian rolls and allotting land to Indians, they did so in a Jim Crow process, separating those they considered Indians and Negroes onto segregated rolls and giving them different rights, making all the multiracial Indians fall on one side of the line. Those so-called “Freedmen” are today in battles with their nations — especially the Seminole and Cherokee — over citizenship claims. Even as far away as Hawaii, the allotment of land coincided with the introduction of notions of blood quantum, defining the Hawaiian people racially for the first time.

Courts rarely litigate racial identity explicitly today. But courts and other legal institutions continue to shape narratives about the meaning of racial identity and its connections to citizenship. The equation of whiteness with citizenship is still with us today in the figure of the Latino or Muslim “alien” and the African-American felon, put outside America’s civic boundaries. The trials that established this equation no longer take place today, but their legacy is ingrained in our thought, our legal system, our cultural practice and our racial common sense. We continue to reproduce racial hierarchy through seemingly neutral practices that perpetuate established patterns of power and privilege. The changing nature of racism has made it harder, not easier, to undo racial hierarchy.

Wasn’t race defined by a ‘one drop of blood’ rule?

Many people portray the history of race in the United States as the rise of the “one drop of blood” rule. We have made too much of this. It was not the one-drop rule that kept the edifice of Jim Crow so strong. Racism could work through many different rules about ancestry, and it did. It could work even with a great deal of racial mixture. Just because more people are marrying across color lines today doesn’t mean race or racism are things of the past.

What can we do?

Today, we’ve come a long way in certain ways, and in other ways, things are worse than ever. Blacks and whites live separately, are extremely unlikely to marry one another (although they both may marry Asian Americans or Latinos) and attend different schools. The income and wealth gap between blacks and whites is greater than ever. And of course, the Black Lives Matter movement has called national attention to the way blacks are disproportionately targeted by the police. Yet there have been surprising changes too, including the presidency of Barack Obama. As Barack Obama reminds us, there is great potential for individuals and communities to make a difference, even to shape the law and create new identities … but only if we understand and take account of our history.

Annual All School Day focuses on ‘Race Relations in the 21st Century: Is It Just a Black and White Issue?’

Race, racism and the 13th Amendment