The collaboration, which was part of Mental Health Awareness Week at USC, included a screening of the documentary Walking Man. The “Odyssey of the Mind” event was curated by Osahon Tongo, a Saks Scholar and USC graduate student.

In Walking Man, Eric Norwine ’12, a graduate of the USC School of Cinematic Arts, and his father, Mark, chronicle their journey to spread awareness about mental health. The documentary follows the pair walking 200 miles across Missouri, where they educate students about mental health issues.

The 70-minute documentary, which was culled from more than 100 hours of footage, offers an intimate platform for addressing the far larger issue of mental health, Eric Norwine said.

“Our hope with the film is to really provide hope for people who might be going through similar things and say, ‘You’re not alone. And there is hope for a better future, a better chance to really just live,’” he added.

PTSD and other challenges

After the Walking Man discussion, three short films were screened and discussed. Post-traumatic stress disorder and other mental health challenges were the subject of Present Trauma, directed by Mark Manalo. 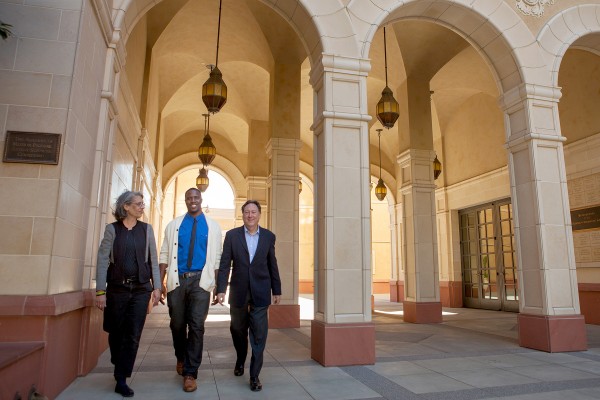 The two other shorts, Happy Bird by Tongo and Glass People, directed by John Berardo, were MISC-produced projects highlighting the institute’s dedication to promoting responsible and socially impactful storytelling.

When making Happy Bird, Tongo consulted staff psychologists at USC’s Engemann Student Health Center to ensure the accuracy of his story, which was partially inspired by a past relationship with an individual who suffered from borderline personality disorder. The evening ended with live music and original artwork, much of it produced and curated by USC alumni.

The U.S. Secretary of Health and Human Services has appointed Professor Elyn Saks of the USC Gould School of Law to a three-year term on the Center for Mental Health Services National Advisory Council.

Former journalist gets firsthand look at the mental health system

As a journalist, Pete Earley has uncovered political corruption, human rights issues and gun trafficking. But when it came to navigating the circuitous mental health system after his son was diagnosed with bipolar disorder, Earley was at a loss.