A newly discovered biological mechanism channels a mother’s available energy — in the form of fat — straight to the reproductive system during stressful times, protecting future offspring at the cost of the mother’s health.

USC’s Sean Curran observed the phenomenon in the worm species C. elegans, but the cellular mechanisms associated with it also exist in humans, raising the possibility that we may share this trait as well.

When an organism is exposed to external stresses such as famine, a protein that protects cells called SKN-1 is activated. In addition to stress resistance, activation of SKN-1 also drives the reallocation of lipids from the organism’s soma, or bodily cells, to its germline, or reproductive system, Curran found. 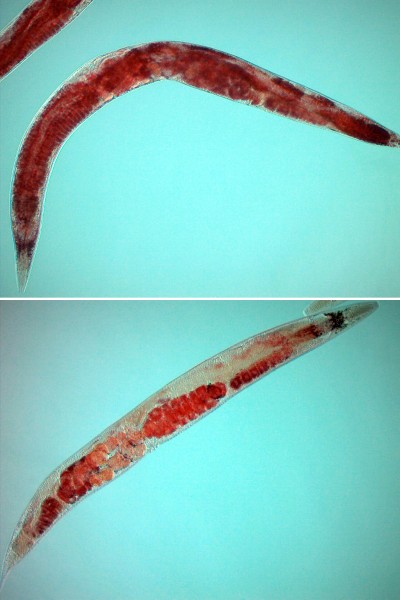 Top: Red dye marks lipids in the soma of a normal worm. Bottom: concentrated in the germline of a worm under stress. (Photo/courtesy of Sean Curran)

Once there, the fats fuel the development of oocytes, or egg cells, making successful reproduction easier; however, the animal itself faces a higher likelihood of a shortened lifespan. (Most C. elegans are hermaphrodites — Curran is still exploring whether the phenomenon also occurs with the male portion of the worm’s reproductive system.)

When the organism again obtains nutrients, the presence of omega-3 and -6 fatty acids stop the travel of fats into the reproductive cells, bringing the animal’s ability to resist environmental stressors back to normal.

“SKN-1 plays essential roles in survival to stress at all stages in life; however, SKN-1 activation mutants are not long-lived. This is incredibly surprising and confusing at the same time since these animals should be stress resistant,” said Curran, an assistant professor with joint appointments at the USC Davis School of Gerontology and the USC Dornsife College of Letters, Arts and Sciences. “Our study shows that the reason constitutively active SKN-1 doesn’t confer longevity is because of the movement of lipids from the soma to the germline to promote the necessity of reproduction.”

Curran is the senior author of a study on the mechanism published by Proceedings of the National Academy of Sciences. His collaborators include researchers from USC, Baylor College of Medicine and Massachusetts General Hospital. The researchers looked at stored fat molecules within the worms visually by staining cells and biochemically with gas chromatography and mass spectrometry. The animals underwent stress from starvation and calorie restriction as well as oxidative stress from hydrogen peroxide exposure.

Oxidative stresses — an overload of reactive oxygen molecules that has been associated with cancer — can also trigger the activation of SKN-1. Since all organisms that require oxygen have to respond to oxidative stress, an understanding of how oxidative stress responses impact reproduction and vice versa is likely to yield more insights into how survival and reproduction balance against each other depending on resource availability, Curran said.

“This is particularly important in the wild, where resource availability is highly variable, and unlike in the laboratory, animals in nature must constantly assess possible risk and future reward,” he explained.

Curran is subsequently exploring the signaling mechanisms underlying this fat reallocation and the environmental triggers of the response. Since everything his team has found so far that regulates SKN-1 in worms has also been identified in humans and the balance of somatic resistance and reproduction is important for all organisms, the findings could have implications for reproductive success in older humans, he said.

Support for the work was provided by the National Institutes of Health (grant T32AG000037 to first author and Molecular Biology PhD student Dana Lynn, R00AG032308 and R01 GM109028 to Curran), the American Heart Association (Curran), an Ellison New Scholar Award (Curran) and the American Federation for Aging Research (Curran).

Animal movement analyzed, with unlikely help from an octopus

USC researchers want to know more about the human tongue, and they travel to Japan for answers.

A genetic mutation may be the crucial link to prevent obesity with high-sugar diets.

USC scientists Sean Curran and Shanshan Pang have identified a collection of genes that allow an organism to adapt to different diets.

Procreation trumps survival — even on a cellular level