As part of a special Nov. 19 Visions and Voices event, 160 students traveled to a performance of the classic play Antigone by A Noise Within, a Pasadena-based theater company. 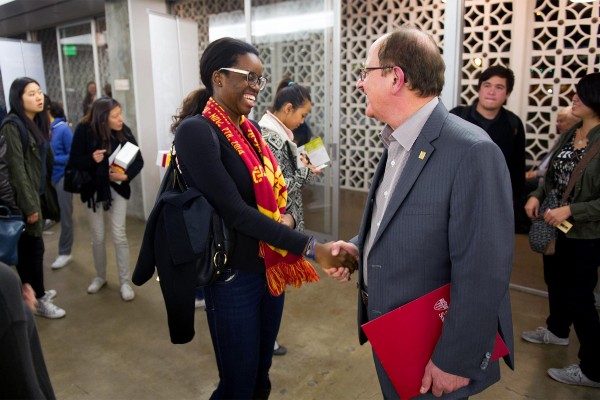 The students saw more than a play, though: Afterward, USC President C. L. Max Nikias joined the cast and director Robertson Dean to discuss some of the play’s timeless themes and take questions from students.

The group watched Jean Anouilh’s 1944 interpretation of Sophocles’ classic tragedy, a variation that makes use of a narrative device that dares audience members to choose between their personal values and those of the world in which they find themselves.

Nikias and Dean explored the different times in which Sophocles’ original and Anouilh’s interpretation were staged.

The original Antigone pushed the envelope when it was staged in 442 BC by putting a female heroine in the lead during the height of the male-dominated Athenian democracy. 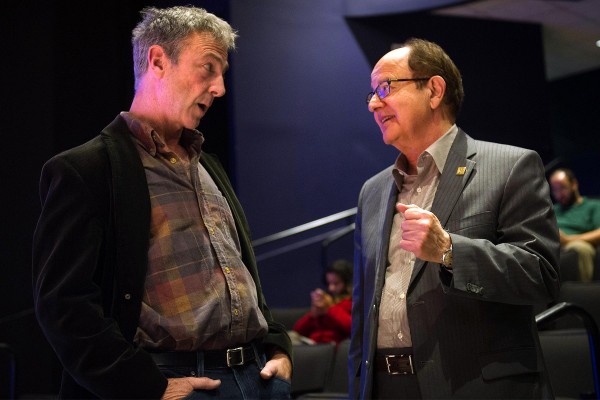 Jean Anouilh’s Antigone was set against the Nazi occupation of democratic France. Even while the character who represents the state, Creon, loses his family at the end of the play, he holds onto power for the perceived best interests of the state. That resonated with the Nazi regime, which allowed the play to be staged despite its subservient undertones.

Nikias’ discussion with audience members foreshadowed the discourse that freshmen and sophomore students enrolled in the CORE 200 course “The Culture of the Athenian Democracy” can expect in the spring. The course will be co-taught by Nikias and Professor Thomas Habinek and will examine the period during which the ancient Athenians created democracy, theater, architecture and fine art, and devised trial by jury.

Nikias will lead analyses of three of Sophocles’ masterpieces — Antigone, Oedipus the King and Philoctetes. Habinek will cover the Peloponnesian War.