My first gaffe: Name tag on the wrong side of the jacket.

My phone was muted, and my elbows were off the table. But the correct side for name tags is on the right lapel, where it will be easy to check without being obvious when extending your hand to meet your party, whose name you may or may not remember, according to Dennis Cornell, chief of staff for USC President C. L. Max Nikias and the host for a recent event.

I didn’t know that. The sound of dozens of people ripping off our name tags to reposition them filled the dining room of Town and Gown on a Wednesday night in early November. Cornell smiled and waited. He was just getting warmed up.

How to excel in the dining room

Dining and Event Protocol is an annual event at the USC Marshall School of Business, co-sponsored by the school’s Marshall Business Student Government and Undergraduate Student Services.

I signed up because I thought it would be a good story illustrating how USC Marshall preps its students for the business world beyond teaching analytics, forecasting and Excel. After all, they’ll be dining with interviewers soon — and later with clients — throughout their careers. Proper dining etiquette is a valuable skill set.

But let’s be honest. I also signed up to avail myself of the opportunity to learn which fork to use first. Better late than never, right?

As it turns out, I was in for a lot more than just dining instructions.

When I arrived at 6 p.m., I was surprised to see the place full of students wearing their best business suits.

This is one of the most popular events of the year.

“This is one of the most popular events of the year,” said Larissa Purnell, president of the Marshall Business Student Government. “Everybody wants to learn best practices before going out on interviews, but we also know these skills will carry through the rest of our lives.”

Cornell took the podium and began the program. As USC students, he said, it was of the utmost importance to make a good impression wherever your travels lead. He hoped the evening would help jumpstart the journey.

Ultimately, he said, it was much more than just a free meal and a chance to learn about a properly appointed table.

“It’s not about the dining,” he said. “It really is a metaphor for how to comport and conduct yourself over your entire life.” 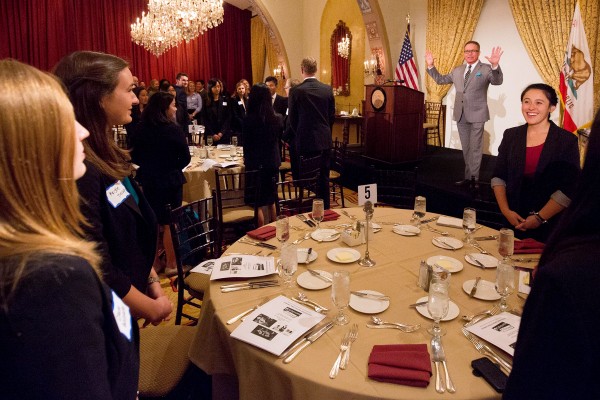 Chief of Staff Dennis Cornell covers dos and don’ts of dining at a Town and Gown event. (Photo/William Vasta)

Many students in attendance were members of the Career Advantage Program, which pairs students with alumni mentors. The mentors were seated at the tables with students, acting as the de-facto hosts.

“Your host will signal when you may start the meal,” Cornell said. “You always wait for the host.”

We hungrily eyed our host, who eventually raised her fork, indicating that the eating could begin.

Before diving into our salads, however, we had to decide how to use our utensils — would it be in the American or European manner, or a hybrid of both? We were instructed to sit on the front third of our seats and not hunch over our plates.

The food comes to you.

“The food comes to you,” Cornell said.

We awkwardly began eating while Cornell made the rounds, inspecting our technique.

“Once your utensil touches your plate, do not lay it back down on the table,” he instructed. “Never pick up a utensil you drop on the floor. Summon a member of the wait staff to replace it for you.”

It was the most difficult salad I’d ever consumed.

The devil is in the details

As the meal continued, Cornell went over details beyond dining technique: what to discuss, topics to avoid. How to dress. Accoutrements.

“When you are invited to meet with a senior level executive who has several candidates from whom he can choose to hire, the differentiator will come down to small details,” he said. “Every choice you make, from what you wear to what you order off the menu, says something about you.”

Did we have business cards? A small notebook in which to jot down observations and ideas? Did we have a worthy pen?

The pen you carry says volumes.

“The pen you carry says volumes,” Cornell said. It doesn’t have to be a $300 Mont Blanc, but it shouldn’t be a 19-cent Bic either. “It’s not about being rich or about class; it’s all about style, which you acquire over time.”

I had the small notebook (it’s a writer thing). And I had business cards. But they were shoved inside the giant tote bag I call a purse and were, I noted with alarm, less than pristine. I would need a card case, I thought. And a smaller purse to bring to dinners. I made a note of these needs with a pen that said “Ray’s Korean Taco Palace, Long Beach.”

One point Cornell stressed repeatedly to the student audience: Never. Ever. Drink alcohol at an interview. Even if they insist. Even if they are drinking themselves.

“Find a way to decline politely,” Cornell said. “Or maybe say, ‘I will certainly have a celebratory drink with you once I am hired.”

The audience laughed. But Cornell was serious. “You are being tested,” he said. “On everything. Know what is proper.”

Claire Williams had a bemused look. She had learned much of this as a child in cotillion, she said. “But I thought it would be good for a refresher course. You don’t want to make any mistakes at a dinner with people who can hire you.”

I left the dinner much wiser and arguably a bit classier than when I had arrived. Or at least I planned to be so for my next important dinner, with a manicure and a better purse for starters. I now know which fork to use first (work from the outside in), and which water glass was my own (to your right).

Best of all? I understand I can find a Mont Blanc knockoff for about $10.

The 25 foods that will change your life can be found in any grocery store, said Patrice Barber, dietician for the University Park Health Center.