In Chavandi Kalan, a small farming village in northern India, women do everything the men do. They milk and care for the water buffalo, and they help in the family farming business while also caring for the children and the home.

Women are the backbone of the community, spending a lot of time in village fields that lack outdoor lighting — when the crops are high, fields are often used for private meetings, and, in areas without indoor plumbing, as a natural outhouse. But without light, villagers are unable to see their surroundings and recognize dangerous people or animals in the vicinity.

There are many places in rural India and Africa where candlelight and kerosene are often the only source of indoor lighting at home. With poor electrical conditions and safety risks, how can smaller communities have light cheaply and safely?

After graduating with his PhD, the entrepreneurial Uppal knew he wanted to create a business with a significant social impact.

In 2006, while nearing 10 years in the optical telecommunications industry, Uppal asked himself: “What’s next? Where else can I make an impact?”

At a time when solar and LED technologies were being widely implemented in the developed world, Uppal and his wife, Rupal Fadia MS ’95, traveled back to their native India, recognizing a large market opportunity for the introduction of such a technology. 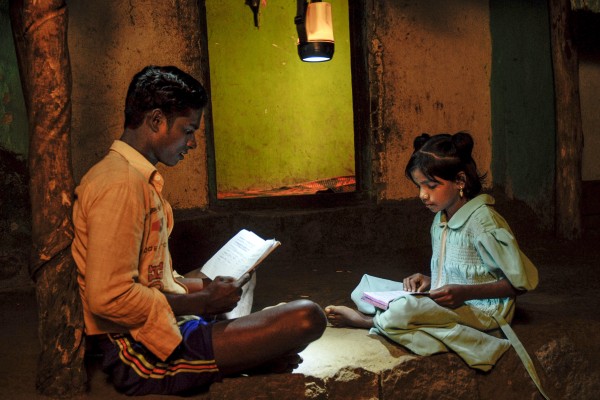 Candlelight and kerosene are often the only source of home indoor lighting. (Photo/Intelizon)

After reviewing solar lighting products, Uppal found that the market was flooded with expensive or inferior quality solutions. He knew he could do it better and with the help of angel investors and venture capitalists, Intelizon was born, pioneering new lighting products that combined solar and lithium ion-based LED technologies. Intelizon products range from small LED lamps for home use to solar-powered outdoor lights.

But from day one, Uppal and Intelizon faced a challenge: creating and selling lighting to rural markets where nighttime light is considered a luxury and no access to an electrical grid. Uppal recognized that these communities lacked awareness about his products. The Intelizon team addressed this problem by introducing village entrepreneurs — residents who educated the neighborhoods about the products, earned a commission and encouraged involvement.

Villagers soon saw a need for the new products, but getting them to look past the upfront cost was more difficult. Candles cost 20 to 40 cents (USD) and could be used for one week at a time. Intelizon’s indoor light cost $10 to $20 — an expensive up-front cost — and many residents did not have that much saved to purchase lights. Uppal and his team worked to educate the community and show them that their $20 would last three to four years at a time, providing savings with a much safer and reliable alternative.

Once solar lighting was introduced into homes, children were able to study and parents were able to work after sunset, enjoying a better quality light without the risk of fires. Some households in India were able to generate extra income by working later while residents in Gambia no longer use candles and are proud of the diminished risk of fire and the feeling they are moving forward as a community.

Often financed by nongovernmental organizations and local community funds, the outdoor lighting provides the community with two things they did not have before: safety and increased productivity. Because of the outside lighting, Uppal said, efficiency has increased, people can work later and women feel safer outside.

“People are very safe now,” he said. “They can actually see what is going on.”

The Mumbai facility intends to draw on the talent and expertise of leading health care institutions worldwide.

Jasneet Aulakh’s research has given her a deeper understanding of differences in the way feminism, women’s rights and political empowerment are expressed in India versus the United States.

Two alums light the way to a better life overseas