Iron is the single most abundant element on our planet. It’s also one of the most important for living organisms, which use it for myriad biological processes. An expedition in the Southeast Pacific Ocean may have found the source of much of the iron used by marine microbes living in the depths of the sea — a finding with strong implications for global climate studies.

The results emerge from a cruise that journeyed from Peru to Tahiti through the waters over the southern end of the East Pacific Rise, a ridge on the ocean floor where several tectonic plates meet. Drawing a jagged line from a point near Antarctica north to the Salton Sea basin in Southern California, the volcanically active ridge is heavily punctuated by hydrothermal vents emitting superheated water that’s rich in minerals.

The scalding, nutrient-dense fluid from the vents rises toward the ocean’s surface and, as it cools, drifts away on deep-water currents, forming a plume much like that of smoke from a chimney, said James Moffett, professor of biological sciences and earth sciences at the USC Dornsife College of Letters, Arts and Sciences.

The expedition found the largest oceanic plume of soluble iron ever measured, stretching some 2,500 miles from the East Pacific Rise.

The fact that the plume was 4,000 kilometers long really surprised us.

“The fact that the plume was 4,000 kilometers long really surprised us,” Moffett said. “Our expectation was that the plume would taper off within 50 miles of the source vents.”

This is the first time dissolved iron has been found to travel so far through the ocean.

“Every single day we were out there, we were surprised to see that the plume of dissolved iron was still present,” said principal investigator Joseph Resing of the University of Washington and the National Oceanic and Atmospheric Administration’s Pacific Marine Environmental Laboratory. “We have never previously documented dissolved iron carried so far in the ocean currents.”

Normally, iron oxidizes quickly in the ocean and falls to the sea floor. How iron from the vents remains soluble for so long is unclear, but the fact that it reaches such distances reinforces previous research suggesting that it could be a major source of iron for southern ocean organisms such as phytoplankton.

From the ocean floor to the sky above

“Iron is a limiting nutrient in these waters,” Moffett said, meaning the low concentrations prevent a large amount of microbial growth in the area.

Most iron in the oceans comes from wind-blown dust or river sediments from land masses, but there are no land masses in the Southern Pacific Ocean, he explained.

“It’s all ice and water out there.” 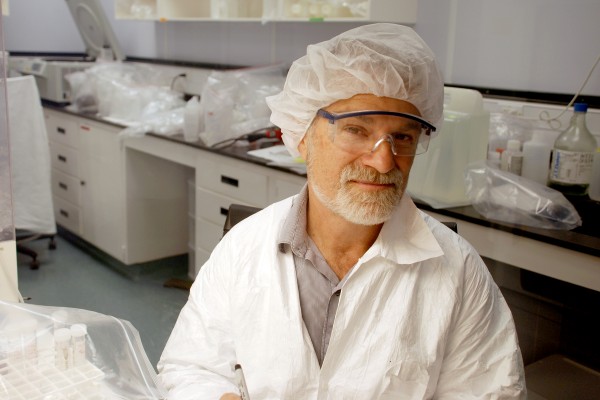 Some iron comes from the sea floor, churned by currents, but the amount is much smaller than that found in the plume. The finding suggests the hydrothermal plumes may be the main source of dissolved, biologically useful iron for the region.

Ocean microbes that rely on this soluble iron to grow play a key role in pulling carbon dioxide — a greenhouse gas responsible for much of the rise in global temperatures — from the atmosphere, Moffett said. Iron coming from these vents, therefore, is a significant factor in the overall global climate.

The researchers continue to analyze data from the expedition to determine what mechanism allows the iron to remain soluble for so long and to further reveal the links between hydrothermal vents and global climate.

The group also is holding a Nov. 8-13 workshop at the USC Wrigley Marine Science Center on Catalina Island. Led by Moffett and supported by the National Science Foundation, the conference will enable the scientists to further examine data from the voyage and explore future studies.

Other scientists who co-authored the current study, which was featured on the cover of the July 9 issue of Nature, include Peter Sedwick and Bettina Sohst of Old Dominion University; Christopher German and William Jenkins of Woods Hole Oceanographic Institution; and Alessandro Tagliabue of the University of Liverpool in the United Kingdom.

Know Tomorrow will transform McCarthy Quad into an ‘eco-hangout’ where students can learn how to shape national policy and help find solutions for a sustainable future.