If Jacob Dekema ’37 was an artist, his signature would be on the world’s largest art installation — 480 miles long — a sculpture with bending and twisting arteries of concrete, swirling through canyons, over hills, through valleys, intersecting in spectacular loops and bridges and all built on a monumental scale with the ultimate in concrete and tensile technology.

Once he was hanged in effigy for putting a highway through a town. Some condemned him for building too many freeways. Others criticized him for not building enough. Officials gave him keys to their cities, and business leaders who appreciated the economic blessings of a good highway praised him.

It was Dekema, as head of San Diego Caltrans from 1955 to 1980, who put the roads through Mission Valley. And without those roads, the Mission Valley we know today would not exist.

Jake, as co-workers affectionately knew him, was better known to San Diegans as “Mr. Caltrans” because of his tenure and innovation during the development of the state’s highway system under his directorship.

In July of this year, “Mr. Caltrans” passed a major milestone. He turned 100. Taking the on-ramp to the Jacob Dekema Freeway, with Dekema’s address on our GPS, we traveled to San Diego to meet the Trojan who helped pave the way, literally, to America.

He started at the Division of Highways, as Caltrans was called, as an engineering student at USC, toiling one summer on a survey crew that laid out improvements on a dirt road to the Yosemite Valley.

“We still saw a few mule-drawn road scrapers around,” Dekema remembered. “Today that’s a historical item that belongs in a museum.”

At USC, he was the debonair president of the engineering club, winning the admiration of students and professors alike, but he didn’t let it get to his head. He cleaned the apartment of a botany professor for extra cash on Fridays.

In 1936, he tested his engineering mettle on the first freeway built in the Western United States — the Pasadena Freeway.

Back then they called them “parkways.” Dekema said the Pasadena Freeway was called the Arroyo Seco Parkway when it was first put on the drawing boards in the late 1930s. There was some disagreement over how the parkway should be built.

“A lot of people said we would never need more than four lanes,” Dekema said. “Only at the last moment, before construction began, did we get the OK to make it six lanes.”

He graduated with honors in 1937 with a B.S. in engineering, returned to the Divison of Highways in Sacramento, worked as a construction engineer on parts of Highway 99 near Fresno and served in the Navy during the war — as a rocket scientist, actually.

The Navy thought my engineering skills were better suited to instruct artillery science.

“The Navy thought my engineering skills were better suited to instruct artillery science,” Dekema recalled. “But I didn’t stay with it. I didn’t see any future in it,” he said with a laugh. “We took ordnance that you’d fire from under the wing of an aircraft and try to make rockets out of them. They’d go every which way. I thought: ‘There’s no future in this — never be any future in rockets at all.’”

Dekema returned to the Division of Highways and rose through the ranks to become director of San Diego Caltrans in 1955. For the next 25 years, about 95 percent of the total freeway mileage in San Diego, Imperial and East Riverside counties was constructed under his directorship.

Creating a model for the nation

In the 1950s, Dekema’s California highway designs became a model for the planners of the Interstate Highway System. The nationwide network had been under study since the Roosevelt administration, Dekema said, but legislation for its construction was not passed until President Eisenhower was in office.

By that time, “Go West, young man” had become the anthem of an entire generation, from young engineers racing against Sputnik in the semiconductor industry that would eventually lay the blueprint for Silicon Valley to young beach boys hitting the surf and Hollywood starlets basking in the glow of Hollywood’s Golden Age. Federal planners had the California template to pull from.

Arriving in San Diego in the mid-’50s, Dekema had the fortune to see millions of dollars in federal highway funding flow into California. I-5 was on the drawing board as the primary coastal route between the Canadian and Mexican borders.

Dekema says that by 1957, two years into his job as director, “We had a plan … for twice as many miles as we ever got to build.”

More than any other technological development, Dekema’s freeways allowed the population to live in dispersed cities far from central urban cores — and in the suburbs and rural regions.

“We built these freeways, and they’re not generating less trips, they’re generating more. More freedom. People want to live out away from the city and drive in to work, or they want to live in one part [of the metropolis] and work in another, or go shopping or so forth. They don’t want to live all in one place like they do in New York.”

Some historians argue that it was Dekema’s freeway designs that gave way to the prevalent suburban development fueling the housing boom of the ’80s and ’90s.

Ahead of his time

In a 1980 interview with San Diego Magazine, Dekema dreamed of a future that is still in the making.

“I hope we built something more useful than the pyramids,” Dekema said.

“But then again, the worse the traffic gets, the faster the electronic revolution develops. It may well be that mass commuting will no longer be needed. People will be able to stay home and work, or they’ll work in small offices, spread out all over the city and countryside, linked by computers and sophisticated communication systems.” 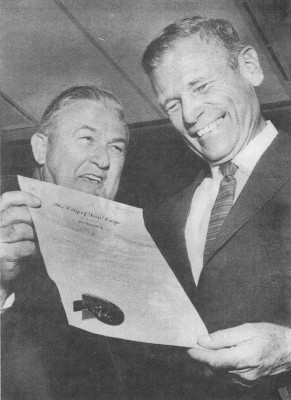 Dekema foresaw these shifts 35 years before they were ideas whose time hadn’t come.

His position at Caltrans immediately broadened his whole outlook. He was no longer limited to official comments on the role of highways and freeways but contributed expertise on all forms of surface transportation as well as air and water travel. Dekema was charged with broad transit planning responsibilities.

“Our overall plan for freeways was about all we could put in,” Dekema said. “We have always said that freeways will not take care of everything for all time. There will have to be other forms of transportation in addition to freeways.”

Have vehicle, will travel

Dekema still believes the highway will remain the basic unit in any transportation system, with other modes of travel meshing into the highway network.

“We had highways before we had automobiles,” he said. Highways will carry the largest proportion of travelers, but they will be augmented by what he calls an automated guideway system of mass transit vehicles that are responsive to customer demand.

Dekema predicted, in the early 1980s, that the auto industry would develop a pollution free auto by the year 2000.

The Association of General Contractors in San Diego dubbed him “Mr. Ecology” for his environmental efforts. In an official speech on July 9, 1970, Dekema outlined the link between ecology and transportation.

His accomplishments haven’t gone unnoticed. Dekema has an office wall covered with awards, including an Award of Distinguished Service from AGC in 1958, an award as one of the 10 national Public Works Men of the Year in 1972 and an award from the USC Alumni Association as its outstanding civil engineer in 1973.

But Dekema was far from just another grind-out-the-plans-highway engineer. He has been credited by many of the present top strata of Caltrans who once worked for him as one of the most talented managers ever to steer the department.

Dekema is still self-effacing about this.

You just find good people, tell them what is to be done and get out of their way.

“You just find good people, tell them what is to be done and get out of their way. I always figured that there may be several ways to do things, and even if somebody else’s way is different from mine, it doesn’t mean he can’t get it done.”

Dec. 29, 1980 was Dekema’s last day as district director of transportation, and the district planned a farewell coffee for “Mr. Freeway.”

“It’s Jake’s Turn” was the theme of the celebration, marking a quarter-century of his leadership, and the many times he’s congratulated his employees for a job well done. Many of his 1,100 employees had come to say goodbye. The only place capable of holding the overflow crowd of employees appreciative of their boss was the patio.

“It’s about time,” he told them. “This job hasn’t always been easy. I’m going to spend a lot of time resting at Cabo San Lucas with my wife, Shirley. It’s rather inaccessible there, you know. Not a lot of highways leading into it.”

Considering the loyalty of employees to Jacob Dekema, it comes as no surprise that he has prided himself on being on the same team as his employees.

“Never tear a person down; instead, build that person up,” has been Dekema’s motto these many years, and not only has the district prospered under it, but there is a warm feeling of fellowship and seamless design that now lives in the bridges and highways they built together.

For his 42 years of civil service, the state legislature officialy named I-805 in his honor. A bronze plaque was raised along the freeway at Governor Drive. Perhaps it should have been made of concrete.

“I suppose that 50 years from now, people passing by it will think I was some kind of war hero,” he said, in typical dry humor. “They probably already wonder who the heck Jacob Dekema is.”

Asphalt and digital highways to meet on Route 66

Bruce Forman preps for a two-week road trip set to the tunes of Western bebop.

As a prelude to My Beethoven week, radio station staffers take the composer’s bobblehead to various venues.

On the road to a new kind of car-sharing?

In the year 2050, what will everyday transportation look like? How will we get to work or run a few errands?

At 100, ‘Mr. Freeway’ looks back at his concrete creations