An old Arab proverb says, “If a pot is cooking, the friendship will stay warm.” By the time U.S. Army officer Andrew Plucker had arrived in Afghanistan in 2009, the pot had reached its boiling point.

Plucker, now a graduate student in operations research engineering at the USC Viterbi School of Engineering, landed in Nangarhar Province on the heels of one of the bloodiest battles in the war.

The Battle of Kamdesh

On Oct. 3, 2009, 300 Taliban assaulted the American Combat Outpost (“COP”) Keating near the town of Kamdesh in Nuristan Province. At 3 a.m., Taliban insurgents ordered all Kamdesh villagers to abandon the area, then opened fire from all sides of the outpost with mortars and rocket-propelled grenades, eventually setting fire to the base. By the time U.S. air support ended the insurgency, eight Americans were killed and 27 were wounded. The casualties inflicted on the enemy were greater — 150 Taliban were dead.

As executive officer, Plucker’s mission was to train an Afghan National Army (ANA) Brigade that could lead the fight against the Taliban so that events like Kamdesh would never happen again. He was tasked with helping them plan and conduct operations against high-value targets, building up their capability and intelligence to keep them ahead of the curve in the conflict.

Getting to see the progress Afghans were making under our watch was very rewarding.

“We went with them on certain ops,” Plucker recalled. “It was some of the most rewarding work I’ve done in Afghanistan. Training them was very difficult, but getting to see the progress Afghans were making under our watch was very rewarding.”

If Plucker was going to succeed, he needed the unyielding trust of his Afghan counterparts, and his word to them was worth its weight in gold.

“Trust is a valuable commodity in Afghanistan,” said Plucker, who knew plenty of stories about insider attacks and Afghan soldiers turning weapons on their American allies.

He wanted to demonstrate an ongoing commitment to their partnership with deeds, not just words, whether in a room filled with ANA soldiers, or conversing with elders in front of mud compounds and rundown bazaars, or passing out school supplies to children who had yet to see the inside of a classroom.

Spending a few minutes with Plucker, one gets a sense of why he was specifically chosen for such a mission. He’s an engineer: calm, calculated and built like a quarterback.

A West Point graduate with a degree in mathematics, Plucker has a keen practitioner’s sense of military operations in a time when the military is training more than just rule-memorizing bureaucrats for the war on terror. Plucker understood that the United States needed field diplomacy as much as it needed firepower.

No sooner had he set boots on the ground in Afghanistan that his field diplomacy was put to the test.

“One day, Major Rahmdil, my counterpart in the ANA, came to me with a request,” Plucker said. “Seven of his guys were captured by the Taliban in the Battle of Kamdesh and were being held prisoner up in the mountains. He wanted me to help get them back.”

Plucker knew what the U.S. military would do in such a situation. “We have multiple avenues of rescuing our soldiers who fall into enemy hands.” His hands were tied, however, when it came to intervening on behalf of his Afghan ally.

For months, Rahmdil labored to get his men back.

“I saw that it was eating him up,” Plucker recalled. “Every once in a while, he’d come to me and say ‘I have to get them back, Andrew. Maybe you can help us with money.’ My response was: “There’s no way that’s going to happen. But don’t worry, we’ll get them back.’” It went on like that for several months. Meanwhile, two out of the seven Afghan soldiers died in captivity.

Then, as Christmas approached, and Afghanistan descended into frosting winter, Rahmdil came to Plucker to tell him that he had found a way.

“Unbeknownst to me, through some avenues, he was able to negotiate the release of five low-level Taliban who were in the custody of Afghan Security Forces for his five soldiers,” Plucker said. 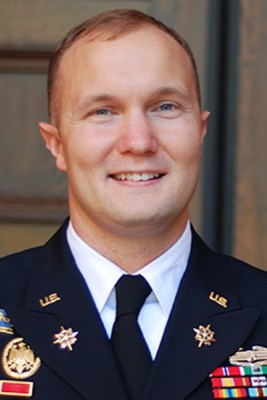 He had only one request: rescue helicopters, which the ANA lacked, to get his men out of the mountains. Plucker called his superiors — but with each phone call, the walls were rising higher.

Without the helicopters, Rahmdil’s rescue mission was doomed. Plucker did not give up, even after superiors threatened to fire him from his post for insisting. It pained him to have to deliver the news to his friend that the helicopters wouldn’t be coming.

Support came from Plucker’s immediate superior officer, a decorated Marine, Lt. Col. Jeff Kenney, who was widely known for his role in Operation Assured Response, a 1996 security mission in the American Embassy in Liberia. For this he received the Bronze Star Medal with Combat “V.”

The surviving Afghan soldiers were delivered via helicopter: frostbitten, starving and badly beat up, but into the safety of allies and unlikely friends.

“I think about that story every Christmas,” Plucker said. “I remember their faces — those soldiers delivered from captivity.”

Plucker, whose last tour in Afghanistan was in 2012 as an intelligence officer, is one of two, out of more than 100 pre-selected officers, given a scholarship to study for a master’s degree in operations research engineering at USC Viterbi.

“Academically, you couldn’t ask for a better place,” Plucker said. “The program is challenging, but it’s giving me skills that I can use in my military career. I’m learning innovative ways to conduct optimization, looking at big systems and processes, and figuring out ways to do them better.”

At the university’s annual Veterans and ROTC Gala, retired Chief Master Sergeant of the Air Force Kaleth O. Wright breaks down his steps for success.

From master sergeant to master’s degree and doctorate, Shawna Hudson finds her place

Overcoming a learning disability, this South L.A. native and Air Force veteran fulfilled her dream of graduating from USC and now teaches corporate America a lesson in racial bias.

Substance use among veterans with PTSD increases during the pandemic

Though many veterans have turned to alcohol and cannabis to cope with pandemic-related mental health issues, USC researchers also found that telehealth visits are on the rise.