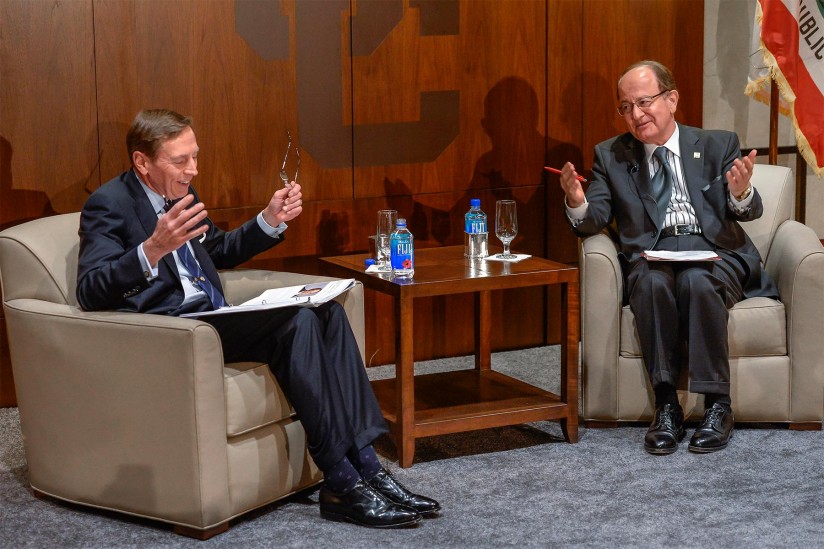 Pitching showcases have become synonymous with technology and startups. But not everyone with a pitch gets feedback from a legendary military and business leader or an audience with a university president.

Here are the five companies that pitched at Wednesday’s event:

Intelligent adaptive security solutions. Armorway offers software that analyzes real-time big data to provide decision-makers with meaningful dashboards and goal-directed actions that optimize the use of available assets in an environment, mitigate risks and increase security.

Micro-pumps for on-demand drug delivery. Fluid Synchrony offers implantable programmable micro-pumps that can deliver a diverse assortment of drugs at the right dose, to the right tissue at the right time, improving the efficacy and safety of drug therapies.

Proprietary warm-on/cool-off adhesives for wound closure that can be easily removed from a patient’s skin by applying a cold compress, minimizing trauma to the skin caused by traditional adhesives.

The event was organized by the USC Viterbi School of Engineering and featured Dean Yannis C. Yortsos and Andrea Belz, USC Viterbi Entrepreneur in Residence and director of the National Science Foundation-funded Innovation Node–Los Angeles.

Investing in vision and judgment

In addition to being the brainchildren of engineers affiliated with USC, the companies chosen to pitch share other elements in common. They’ve all emerged from the USC ecosystem and have invested much more than just thought into their ideas. Each has a proven product recognized at international business competitions and has the “secret sauce” to leverage technology to capture a large audience with the aid of modest capital.

Petraeus stressed that the entrepreneurs are just as important, if not more, as the ideas they’re championing.

“You invest in leaders and you invest in big ideas,” he said. “You weigh the vision and the judgment — the ability, without micromanaging, to have an eye for detail and a heightened awareness of the economic context in which the big ideas will be operationalized.”

Petraeus, who holds a Ph.D. in international relations and economics from Princeton University, is a Judge Widney professor at USC and a partner with global investment firm KKR & Co. He serves as chairman of KKR’s Global Institute and as a mentor to USC student-veterans, in addition to academic appointments at City University of New York’s Macaulay Honors College and Harvard University’s Belfer Center for Science and International Affairs.

USC, a microcosm of the real world

In a fireside chat with Nikias after the showcase, Petraeus addressed the most significant contemporary global challenges, including various international security issues, macroeconomic trends, and the importance of strategic leadership in the 21st century.

“In order to thrive,” Petraeus observed, “entrepreneurs have to understand, in particular, the trends developing around the world amid the energy, manufacturing, life sciences and I.T. revolutions.”

Nikias echoed these sentiments and offered that, at USC, “we’ve created an environment that is a microcosm of the real world: 128 different nations are represented here, and they all come together under the Trojan umbrella.

“We’re creating the culture for entrepreneurship and innovation through transformative faculty and progressive institutes,“ Nikias said.

“The best is yet to come,” Nikias said. 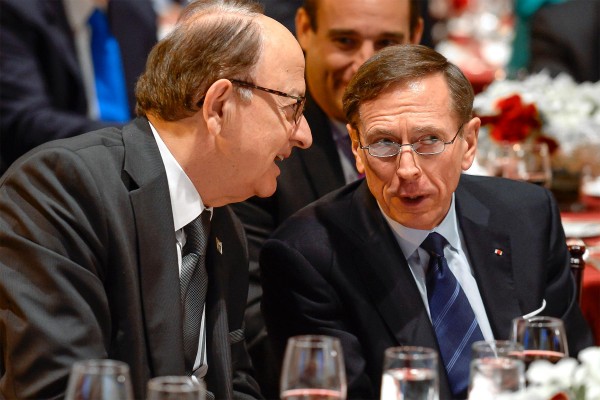 Petraeus and Nikias also fielded questions from the audience on USC’s role in medical science and biotech.

“The LA basin is lacking in biotech,” Nikias said “Each year, [area universities] graduate over 5,000 engineers and scientists. But most of them migrate, and we need to establish additional infrastructure to keep them in this area.

“In addition to creating the infrastructure for biotech, we are developing entrepreneurship in our professors. They don’t have to go and work for a large corporation like Google that will own their intellectual property. We are helping them start their own companies that they can then sell to the Googles of the world.”

Petraeus, who upon joining USC’s faculty ranks in 2013 said the university “is in the middle of a surge” in innovation and prominence, wants to organize events like The Real Deal every semester.

“The word will go out that USC is the place to innovate, to transform a big idea into a company that can succeed,” Petraeus said.

One military hero salutes another at the annual Leadership Lecture in Virginia.