No one knows how many Chinese children have autism, but the number is likely to be in the millions. Very few receive treatment.

It’s this gaping hole that cinematic arts professor Marsha Kinder hoped to fill with the newly released Mandarin-language version of Interacting With Autism, the video-based website she co-created in 2013 with USC colleague and Oscar-winning documentary filmmaker Mark Jonathan Harris and designer Scott Mahoy.

Featuring dozens of short films, the site presents the latest evidence-based information on how to understand, treat and live with Autism Spectrum Disorder. Although the site originally was conceived for English-speaking audiences, the creative team had its eye on global needs early on.

“When we first started research for this project, we were looking at what was being done worldwide,” said Kinder, now an emerita University Professor. “Good work was coming out of England, Canada and Australia. In China, we found there were hardly any resources.”

China’s first autism case was diagnosed in 1984, yet a decade later, treatment services remained nonexistent. That vacuum was captured in the award-winning 2007 documentary Children of the Stars. In 1992, a woman named Tian Huiping had embarked on a 900-mile journey from Chongqing to Beijing on a fruitless quest for therapies to help her young son with autism. She found nothing.

Undeterred, she established her own clinic in 1993. Beijing Stars and Rain became the country’s first autism rehabilitation facility, training families and caretakers in applied behavior analysis, a standard science-based method for autism intervention. Since then, other autism-related nongovernmentals have sprung up in China’s big cities, but long waiting lists and high program costs put them out of reach for the vast majority of families.

So while autism awareness has increased in China, diagnosis and treatment are still rare. After 20 years, Beijing Stars and Rain had reached only 10,000 families. At the state level, what services exist end at age 6 and are confined to big cities, according to a recent article in The Wall Street Journal.

For Chinese children on the spectrum, even access to public education isn’t a given. An exposé in SEN magazine noted that in rural areas and small cities, kids with ASD are expected to be homeschooled by their parents, who receive no training in proven methods. The problem is compounded by a dearth of qualified teachers: Special ed is considered a low-prestige field in China, and very few educators choose to specialize in it.

In this environment, Kinder and Harris saw an opportunity to do a great deal of good with relatively little effort.

At present, only one video features spoken Mandarin: Frankie’s Dream.

A collaboration between two film students from USC and the Communication University of China (CUC), the short documentary, filmed entirely in Los Angeles, offers a glimpse into the life of a Chinese-American family adapting to the special challenges and gifts of their school-aged son with ASD. 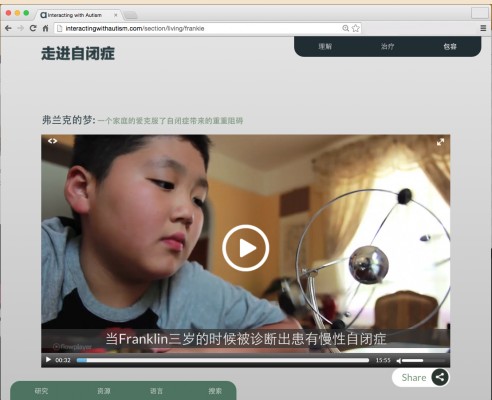 Frankie’s Dream was a product of the 2011 Global Documentary Workshop, a joint USC-CUC summer program that pairs American and Chinese filmmakers, alternating between Los Angeles and Beijing. Kinder and Harris have run that program since 2006.

“Now that we have a Mandarin version of the website,” Kinder said, “we hope to have other student projects focus on autism in China for next year’s Global Documentary Workshop in Beijing.”

Originally funded by federal grants from the Agency for Healthcare Research and Quality, the Interacting With Autism site currently gets 8,000 hits a month — a significant portion of them from overseas. Kinder and Harris hope to increase monthly visits to 20,000 in the near future.

We think the Chinese version has tremendous potential.

“We think the Chinese version has tremendous potential,” she said. Their team has developed a Chinese publicity strategy and hired a Web growth service to drive targeted traffic to the site.”

An independent researcher has been measuring the site’s impact. Preliminary results from a study conducted with 104 parents of children recently diagnosed with autism showed that exposure to the website produced significant increases in their knowledge about treatment options. It also made the parents feel more hopeful and confident in their own abilities to help and advocate for their child.

Kinder believes this effectiveness is rooted in the website’s strong “emotive” character. “Because it’s based in video, it’s very accessible and emotionally engaging,” she said.

All it needed to reach a wider audience was subtitles.

Can researchers enhance the dental experience for children with autism?

Heather Volk is on the hunt for how and when air pollutants influence development of autism in early childhood.

When in-person therapy became too dangerous, every state adopted at least one policy related to treatment access for patients suffering from opioid addiction. But no state did everything that was necessary, the USC study found.