Service members receive a hero’s welcome at USC, making it little wonder they’re marching to campus by the battalion.

More than 1,000 active military personnel, veterans and their family members are currently enrolled in degree programs at the university; another 163 students are cadets and midshipmen in USC’s three long-standing ROTC programs. Across the university, about 1 in every 40 Trojans has an armed forces affiliation.

The USC School of Social Work alone currently enrolls 445 military-affiliated Trojans in its master’s specialization in military social work. Over the summer, the Master of Business for Veterans program at the USC Marshall School of Business admitted its third cohort of 51 outstanding men and women. The yearlong executive program is designed to translate leadership skills acquired in armed service to the business arena. 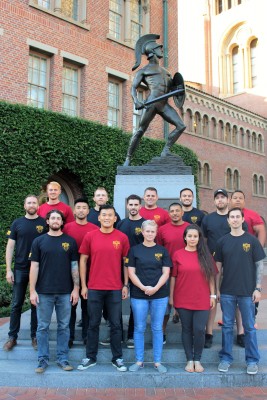 Other Trojan military mobilizations during 2015:

Veterans turn their attention to academics

Veterans in search of an education mobilize at USC